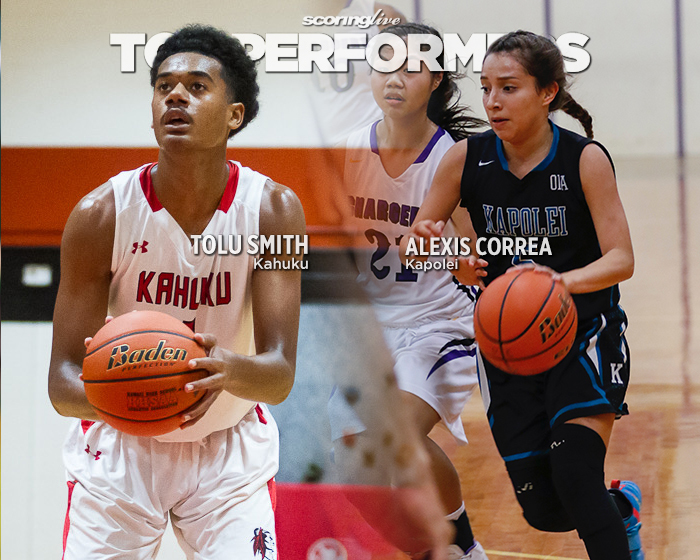 Male Athlete of the Week: Tolu Smith, Kahuku basketball
It's hard to miss Tolu Smith on the basketball court.

In his first season in the 50th state, the 6-foot-10 big man has made an instant impact for the Kahuku boys basketball team. Smith, a senior transfer from Mississippi, has scored in double digits in every game he has played in this season and is averaging 18.4 points per game on the year.

Smith turned in a couple of big performances for the Red Raiders (4-0) last week. He logged double-doubles against both McKinley (16 points, 12 rebounds) and Moanalua (21 points, 18 rebounds) in two tight games.

In Thursday's 48-45 road win over the Tigers, Smith shot 7 of 13 from the field and added four assists with a block. Five of his rebounds were of the offensive variety.

Two nights later, in a 62-56 win over Na Menehune, Smith was an efficient 10-of-13 shooting with two assists and two blocks. He also grabbed seven boards on the offensive glass.

"When you put up twenty-plus points and over fifteen rebounds a game that says a lot, but he's just that type of player," Kahuku coach Brandyn Akana said. "That's his strength. He's just so good at getting position near the basket and he's just a high-percentage type player."

Akana said Smith's large frame, combined with a plus basketball IQ makes him a tough matchup for any team.

"He doesn't force stuff — he's a great passer — and that's why he's not easy to guard, because if he catches it in a certain place then it's over and if he catches it and you double- or triple-team him, then he can find the open man, so that makes him really dangerous with and without the ball," Akana said.

Smith is averaging 19 points per game through Kahuku's four league games. He scored a team-high 18 points in a road win over previously-undefeated Kalani Wednesday night.

Akana, whose team is replacing a bevy of talent including First Team All-Hawaii forward Daniel Fotu and Player of the Year Jessiya Villa from last year's state championship-winning team, said Smith has become the focal point of the offseason for this year's squad.

"We try to get him the ball deep in the paint and close to the basket — that's our offense," Akana said. "He's a very talented big that can handle it, that can pass, and his presence defensively is huge for us. He just protects the rim really, really well."

An ankle injury, followed by a wrist issue slowed Smith down early on the preseason, but he's been able to overcome the setbacks and ranks third in the Oahu Interscholastic Association Division I in scoring average.

"He's a young senior — he just turned 17 — so it's one of those where his body is changing, but at the same time he's so talented and he's so gifted that it is kind of hard to imagine him when he fills out. He's the type of player that will only get better," Akana said.

Smith, who is a 4.0 student and has signed to play for Western Kentucky next year, has made a seamless transition from the deep South.

"Hawaii is a big difference from Mississippi, but he has embraced his culture and embraced his family members here and I think he's just kind of taking it in and learning the lifestyle and continuing to learn the game of basketball, but the best is yet to come for him," said Akana, who noted Smith's work ethic has been impeccable in his short time at Kahuku.

"He's constantly working on his game and he does a really good job of practicing, not only in the gym during practice, but on his own, getting in some extra shooting at the park with his dad, so I think the young players see that and I think many of them have respect for him because of that. Of course, that's what the good players do. For him, I think he's a leader on and off the court," Akana said.

Female Athlete of the Week: Alexis Correa, Kapolei basketball
Over her four seasons on the Kapolei girls basketball team, Alexis Correa has seen her role evolve over the years.

The 5-foot-1 guard has gone from being a role player as a freshman to flourishing as the Hurricanes' leading scorer as a senior this season. Correa, who is averaging 10.8 points per game in league play, posted two of her best showings in a pair of must-win games last week.

Correa scored 19 points in a 38-26 home victory over Waipahu Wednesday and followed that up with a 17-point effort in Friday's 53-15 road win at Pearl City.

"It started with her defense, and then she got out in transition, but then she also hit some 3s," Kapolei coach James Aronica said. "Against Pearl City she made a couple of tough shots driving through the lane and she also shot the ball pretty good that night."

Correa shot 7 of 13 from the field against the Chargers.

The pair of wins snapped a two-game losing skid for the Hurricanes and lifted them to 3-4 in the Division I West on the year, keeping them in the hunt for 12-team OIA tournament with just three games left in the regular season. Only the top six teams (of seven) teams in each division qualify for the postseason.

"When you dig yourself into a hole, you've got to dig yourself out of it one game at a time, and so that was really crucial for us to win those games," Aronica said.

Correa struggled in both Kapolei losses the week prior. She was held to seven points in a 25-point loss to Mililani on Dec. 15 and just two in a 13-point loss to Radford on Dec. 19.

"She was 0 of 11 from the field against Radford, and so she showed a lot of resilience in her ability to bounce back from that game and perform," Aronica said of Correa, who has been in the starting lineup since her sophomore season.

"She's always been a good defender, (but) when she first came to us as a freshman her ball-handling, shooting and overall offensive game needed development," Aronica said. "She's developed that with us, but also on her own and you've got to give her credit. She's self-motivated when it comes to that and that's something I will definitely miss about her. She's worked hard and she's grown a lot and put a lot of work into her game in the offseason."

As Correa has improved her strength, her confidence has also grown, Aronica added.

"Her first two or three years, she's always shy away from contact, but now she searches it out and I think that's just because she has more confidence to finish around the basket," he said.

Correa, who also joined the bowling team in the Fall, has worked her way into the role of go-to player for the Hurricanes this season.

"Honestly, we go as far as she goes," Aronica said. "When she's hitting shots it just makes all the difference, (but) when she's had bad games we don't do well. When we have good games, she plays well. That's the trend."

In a down-to-the-wire game against Campbell earlier this season, Correa poured in a season-high 23 points and went toe-to-toe with Gieani Balino, the Sabers' prolific scorer.

"In overtime we were down by four, 55-51, and after she hit a free throw on an and-1, she followed that up with a steal and a 3-pointer to bring us within one," Aronica said.

Correa and the Hurricanes will host Waialua Thursday before visiting Aiea Saturday.

Felicer Barut, Waipahu — Scored 24 points in a win over Nanakuli

Marcus Damuni, Kahuku — Scored 16 points with 11 rebounds in a win over Moanalua

Kolin Galdiano, Damien — Scored 19 points in a loss to Maryknoll

Robert Garrison, Radford — Scored 20 points in a loss to Aiea

Matt Lukins, Radford — Scored 22 points in a loss to Aiea

Zoar Nedd, Kapolei — Scored 20 points in a win over Mililani

Jordyn Perez, Maryknoll — Scored 19 points in a win over Damien

Everett Torres-Kahapea, Kailua — Scored 42 points in a win over Moanalua

Mitchell Williams, Campbell — Scored 20 points in a win over Radford

Josh Willis, Castle — Scored 21 points in a loss to Kaimuki

Jayden Wyatt, Nanakuli — Scored 23 points in a loss to Waipahu

Cheyenne Ardona, Mililani — Scored 25 points in a win over Waialua

Kalei Cates, Nanakuli — Scored 25 points in a win over Waianae

Kaelyn Espinda, Kaimuki — Scored 20 points in a win over Farrington

Braeanna Estabillo, Lahainaluna — Scored 25 points in a win over Kamehameha-Maui

Sisilia Kaufusi, Kahuku — Scored 32 points in a win over Castle

Alyssa Padilla, Pahoa — Scored 19 points in a win over Kau

Samantha Pollard, Kalaheo — Scored 20 points in a loss to Kaiser and scored 25 points in a win over Kailua

Dahlis Sablay, Mililani — Scored 20 points in a win over Aiea

Ashley Taylor Peralta, Kamehameha-Maui — Scored 19 points in a win over King Kekaulike and scored 22 points in a loss to Lahainaluna

Nicole Olanda, Aiea — Scored the lone goal in a win over Campbell