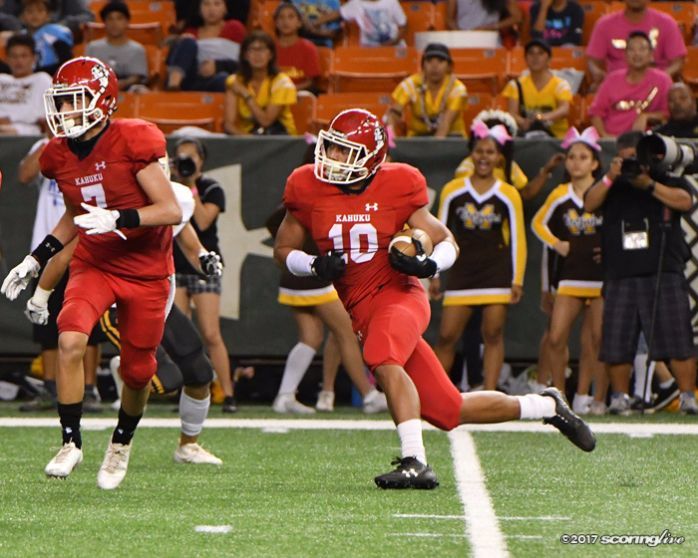 Kahuku LB Miki Ah You runs the ball back against Mililani in the OIA Division I championship game. Leighland Tagawa | SL

HALAWA — Kahuku's vaunted defense looked like it had met its match early on in Saturday's Oahu Interscholastic Association Division I championship game.

The Red Raiders quickly found themselves in a hole after Mililani needed just 39 seconds to find the end zone. Blown coverage on the play allowed Dillon Gabriel to find a wide-open Mystic-Josiah Sampaga for the 15-yard touchdown pass.

"Just calm down and just play our ball; That's all we had to do," Kahuku defensive coordinator Sola Soliai said. "The last thing you want a defense to do is get out of their element and the most important I told them was just to calm down, just play our game and it's going to be an uphill battle, so those guys took the challenge and they fought from the first play all the way to the last play."

Things seemed even more ominous for Kahuku when quarterback Sol-Jay Maiava lost a fumble on its first play from scrimmage, which Mililani recovered at the Red Raiders' 31-yard line.

However, the defense clamped down and forced the Trojans to turn it over on downs.

"I tell them that ‘There's going to be a storm throughout the game. I don't know when or what it's going to be, but if we stay together as one team and we weather the storm, we're going to give ourselves a chance to win," Red Raiders coach Makoa Freitas said.

After Maiava and the offense got the ball back, it put together a 14-play drive, but it ultimately stalled after running back Toalei Lefau was ruled down short of the goal line on fourth-and-goal from the Mililani 1.

Gabriel led the Trojans on their ensuing drive, all the way to the Kahuku 32, but was intercepted by Kaonohi Kaniho to end the scoring threat.

Defensive lineman Samson Reed came up with a sack on the very next play, and two plays after that, Lefau forced a fumble by Tuivaiave-Olomua, which was recovered by Reed at the Red Raiders' 41-yard line.

Four plays later, Kahuku got on the board with Maiava's 33-yard option-keeper up the middle.

However, Mililani expanded its lead back to two scores when Gabriel hit Ryan Chang for a 49-yard TD just 31 seconds left. Kaniho was in position to make a play on the deep ball, but slightly mistimed his jump, which allowed Chang to haul in the pass en route to the end zone.

Then, as if things couldn't get worse, Miki Ah You lost possession on the ensuing kickoff return and the Trojans recovered at the Kahuku 27-yard line.

The Red Raiders stood firm on defense. They came away with a big time goal line stand after turning back Mililani on fourth straight runs with goal-to-go.

After tying the game at 21 on Lefau's 1-yard plunge with 6:45 left in the third quarter, Kahuku coughed up its fourth fumble to halt its next possession.

Once again, no biggie.

That's because the defense, once again, forced a three-and-out by the Trojans. Furthermore, Thornton Alapa blocked Cy Kuboyama-Hayashi's punt on fourth down and Kaniho returned it seven yards to the Kahuku 42.

Despite all four of its fumbles, Kahuku came away unscathed, thanks to its defense.

"We have our offense's back all the time. We always back them up," said sophomore cornerback Alex Fonoimoana-Vaonu, who finished with 11 tackles, including nine solo stops. "We executed most of our plays. Our coach, coach Sola, told us to keep playing our game and just work hard and we'll come out with a happy ending."

But perhaps the biggest defensive play of the night came with 7:31 left in the fourth quarter. Just after Mililani had reclaimed the lead with a 32-yard Damien Santiago field goal, Fonoimoana-Vaonu ripped the ball out of the hands of Kuboyama-Hayashi after a short completion and carved his way through the rest of the Trojan offense for a 45-yard fumble return for touchdown.

"Our defense, we kept our head high and we just played every single down like we do," Fonoimoana-Vaonu said. "The mentality we had was just going out and trying to execute the football game."

The Trojans took a 31-28 advantage on Gabriel's 11-yard scoring strike to Kilifi Malepeai with 5:05 left to play, but Kahuku put together a six-play, 70-yard drive that was capped by Kaniho's 28-yard TD reception from Maiava with just 1:34 remaining.

"I actually thought they were going to call (pass interference), but then I just kept going and the ball fell in my hands," Kaniho said.

It was Kaniho's only catch — and target — of the game.

"I was actually sitting on the bench and then my dad yells my name and tells me, ‘Go in, back side one-on-one,' and that's what we pretty much been trying to have me do all year, so it paid off in the end," Kaniho said.

But Mililani still had a chance after getting the ball back with 1:23 to play at its own 5-yard line.

"I was telling my d-line, ‘We gotta get to (Gabriel). I want all sacks, all four downs,' and we had one late hit, but we bounced back from it and we moved on to the next play," Kaniho said.

The Trojans got to their own 30 after Gabriel picked up 10 yards and a first down on a scramble and a roughing-the-passer penalty against the Red Raiders.

After consecutive incompletions by Gabriel to set-up third-and-10, Lauina Falatea and Ah You closed in on the Trojans' quarterback for a sack and 12-yard loss.

Gabriel's fourth-down prayer to Chang was batted away by Fonoimoana-Vaonu for a turnover on downs and Kahuku was able to run out the clock with a kneel down.

The comeback was especially gratifying for Ah You — Kahuku's unquestioned leader — after his special teams' miscue.

"I just knew that there's something else and another play to play," Ah You said. "I knew there was more game left, so I just buckled down and did what I had to do."

Ah You finished with a game-high 15 tackles, including 11 solo stops and three tackles for loss.

"The example he's shown is the example we preach as coaches and a staff, which is it doesn't matter how good or bad you did on the previous play, you've got to come back and do a better job, so it's one snap and clear and go," Soliai said. "No matter what you did the ten plays before or six seconds before, it doesn't matter because you always have a chance until the clock hits zero. These guys' perseverance and their dedication really showed tonight."

Mililani posted 376 yards of total offense, but was held to 3 of 10 on third downs and 0 for 3 on fourth downs.