Open Mic
Observations from Kahuku-Mililani 7-on-7 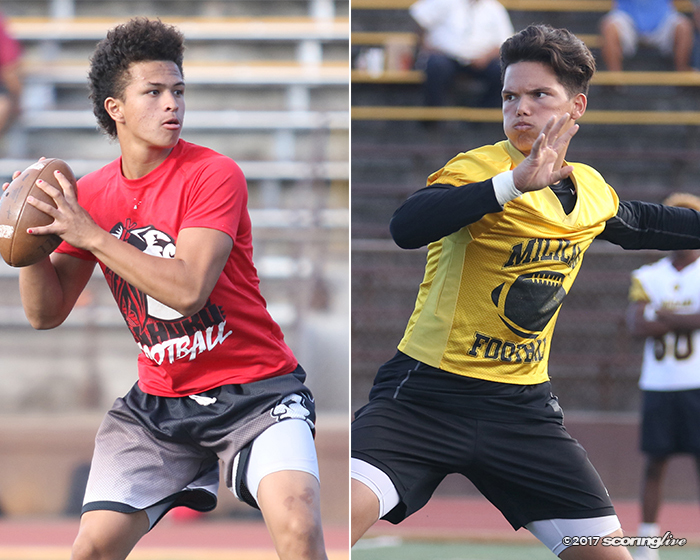 Dillon Gabriel and the Mililani Trojans hosted Sol-Jay Maiava and the Kahuku Red Raiders early in the week in a battle between two perennial contenders in the Oahu Interscholastic Association.

Gabriel, who will be a junior in the Fall, led the Trojans to the Division I state title last season and has an offer from Navy. Maiava, who helped Kahuku advance to the first-ever Open Division state championship in 2016, already has offers from Michigan, Hawaii, Utah and Fresno State before his sophomore year in high school.

Before I write about some of the things I saw, I just want to note that this was only a 7-on-7 scrimmage. When the pads come on and it's 11-on-11, it's a totally different animal. Also, a handful of key players on both sides were either off island for camps or held out with a minor injury. I didn't catch who was missing on the Mililani sidelines, but I do know that Kahuku LB Miki Ah You, a First Team All-Hawaii selection, and OLB/SS Nalu Emerson did not play.

Also, it's still the first week of June. A lot can change between now and when the season starts. All in all it was a good opportunity for both teams to measure up where they are at against a quality opponent.

Anyways, here are some things that stood out to me:

-Gabriel has improved on his deep throws from a year ago. His throws travel a lot faster and a lot quicker, which should really open up the field for the Mililani offense. The Trojans are more than happy to hit a short route for a 5-yard completion, knowing that it can lead to some big plays down the line.

-Gabriel was picked off on his second throw of the game, but he bounced back in the later series to throw back-to-back touchdown passes down the right sideline to Cy Kuboyama-Hayashi.

-The Kahuku player with the INT was Aaron "Kana" Fonoimoana Vaomu, an upcoming sophomore. It's also worth noting that Fonoimoana Vaomu was able to return it for what would have been a pick-six.

-The Kahuku offense was a little rusty out of the gate, with drops plaguing the first two series and a interception by Maiava. However, the Red Raiders bounced back and scored five times in their next seven series with Maiava and backup QB Thorton Alapa each throwing multiple TDs.

-The transfer of Punahou RB/SB Enoch Nawahine to Kahuku was a welcome addition for the Red Raiders' offense. I didn't see him play on the first two series, but when he did get in the game, he was an instant impact. He caught an impressive wheel route in traffic down the left sideline for 22 yards for what was the biggest Kahuku play at that point. The catch was so good that I started to take stats for Nawahine. By my estimation, he finished with 10 receptions for 132 yards and 3 TDs, all coming from Maiava. After scoring his second TD of the game, the passing game really opened up for the receivers next to Nawahine. I know it's too early to tell, but he probably has the best hands of any Kahuku player in recent memory.

-While Nawahine emerged as the de-facto go-to threat for the Red Raiders, Mililani has plenty of options to go to depending on what the defense gives them. If you give him time, Kuboyama-Hayashi should be able to beat most corners on a deep pattern on the right side. He can also stop on a dime and catch a quick pass right in front of the sticks. Ryan Chang lined up in the left wideout spot and made a handful of nice grabs for positive yards and caught a 25-yard TD on a deep post from the Trojans' backup QB on Mililani's final series of the night. Kaysen Higa spent most of the time in the left slot and made a couple of good catches in the seams.

-There were several other receivers that made some great plays, but they didn't have names on their back of the jerseys so I can't name them. One fresh face that did have their stock rise was Nayirr Muhammad, who will be a senior the upcoming season. He spent time both at the right wideout and right slot position so he looks to be a versatile weapon for the Mililani passing game.

-Speaking of versatility, LB/RB Jalen Olomua was used in both slot positions for a good amount of the game. Most of his grabs were of the short yardage variety, but he will be a tough guy to bring down when the pads come on. He could turn into a reliable option on third-and-short situations.

-I think Kahuku fans will be pleased to know that the Red Raiders also utilized tight end sets with Sekope Latu in the lineup. With Latu lining up on the line of scrimmage, Kahuku used different looks with their flanker (Z) receivers. Latu is a big target at 6-foot-4, but he had a couple of drops in traffic that he should have hauled in. On a positive note, Latu ran good routes and caught passes cleanly when he got separation on out routes.

-Alapa, the Kahuku backup QB, looked like a poised pocket passer. He was fluid in his drops and had some zip to his throws that you wouldn't expect out of a backup. Alapa also threw two touchdown passes to two different receivers and did not have an interception. Between he and Maiava, Alapa is probably the better pure passer. Now, I'm not trying to start a quarterback controversy here, but I'm just trying to note that the Red Raiders have depth at the position. Alapa has led the junior varsity team to the last two OIA Division I championship games and would be very much capable of leading the Red Raiders to a title on the varsity level if Kahuku needs him to be.

-A standout on the defensive side of the ball for the Trojans was Venaiah Meleisea. The senior-to-be DB picked off Maiava on a flat-curl combo on the Red Raiders' second drive of the game and dropped what would have been his second INT of the night with Alapa in the lineup.

-Without jersey numbers, he was hard to identify players on the Kahuku side of the ball. I do remember that KJ Macatiag did record an interception out of the safety spot against the Trojans' backup.

-One good defensive note for the Red Raiders is that Sola Soliai will be interim coach Makoa Freitas' defensive coordinator. Soliai was former Kahuku coach Lee Leslie's DC three years ago and was the DC for the Rich Miano-led Kaiser Cougars that won the Division II state title in 2013. I do remember that when Leslie was coaching the Red Raiders, the defensive unit really carried the team that struggled to execute Leslie's offense.

-I didn't catch the Mililani backup's name, but I'm told that he will be JV. The Trojans' true backup for the season is still to be determined, but Kuboyama-Hayashi and Higa have both spent time at QB two seasons ago.