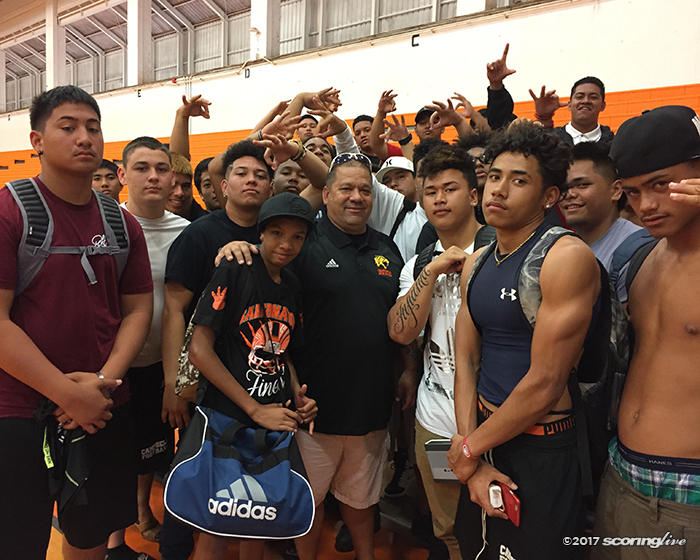 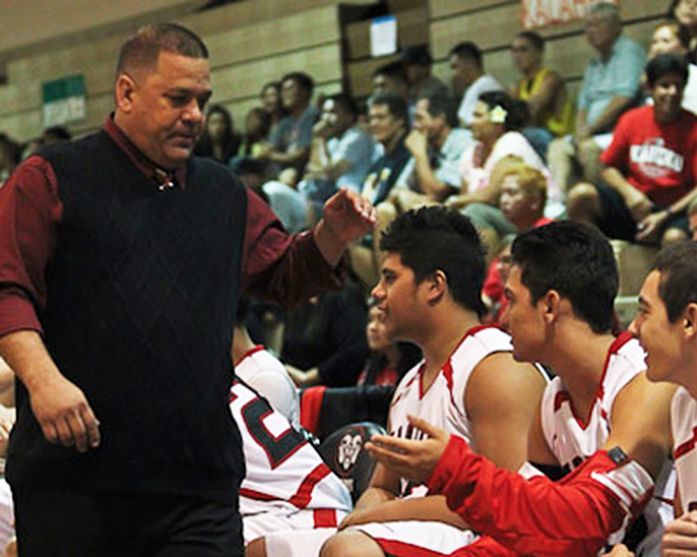 Darren Johnson, pictured in the left, also coached boys basketball at Kahuku at led the Red Raiders to an OIA title in 2012. Pete Caldwell | SL

Johnson, a Kahuku alumnus with 10 years of head-coaching experience, succeeds Amosa Amosa, who was not retained after nine seasons, posting a 56-41 record.

"I kind of mentioned to the kids, Kahuku is Alabama," Johnson said of the attraction to the Ewa Beach school. "Campbell's an SEC team that could compete with everybody in the state and I think everybody in the country. I don't just look at Hawaii football. I want to extend this to some of the Mainland teams. I have to be able to take a team that I know I can play with."

He said his plan is to eventually have the Sabers play teams such as national champion Bishop Gorman.

Johnson was head coach at Kailua from 1996 to 2003 and at Kaimuki from 2007 to 2008. He has compiled a 74-36-1 record as a head coach. He led Kaimuki to the 2007 OIA White (now Division II) championship and Kailua to a co-championship in 2001, when it shared it with Kahuku. There were co-champions that year because regular-season games were postponed during the week of 9/11. That left the league one weekend shy of completing its postseason.

He also was served as offensive coordinator at Kahuku under Reggie Torres and at Kapolei for Darren Hernandez. Johnson also was head coach in basketball at Kahuku from 2011 to 2014.

Johnson said he has contacted prospective assistants, but could not name them yet since his announcement as head coach wasn't made until Friday. He said he would like his son, Kawe, an all-state football player and a 2013 Hawaii Hall of Honor member who went on to play at New Mexico State, to join his staff. But Kawe, who is graduating this spring, has a job in Dallas as a personal trainer and is waiting for some endorsements.

"I want it to happen (the endorsements), but I want him to come home," coach Johnson said of his son. "We have to wait and cross that bridge when we arrive there."