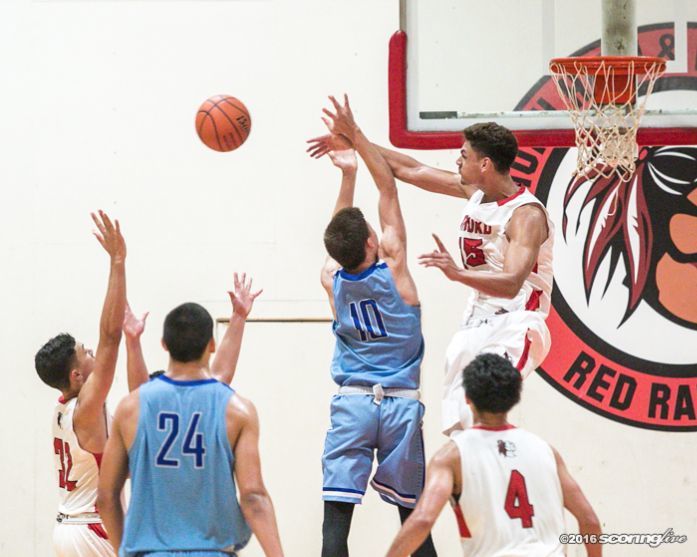 Everyone in the state should know that scoring on Kahuku's football team doesn't come easy.

Kailua fans would argue that the same belief should extend to the Red Raiders' boys basketball team as well.

The top-ranked Red Raiders forced 16 turnovers, recorded 12 steals and six blocks while holding the Surfriders to 25 percent shooting from the field (11 of 44) to improve to 2-0 in league play.

"We practice it a lot and we know it's our strength," senior guard Codie Sauvao said of his team's defense. "We got a lot of athletes on our team so we know what to do on defense. Coach (draws) up a lot of good defensive zones and (man-to-man defense), and knows when to switch it up and stuff so that's good."

Sauvao, who was the starting strong safety for the Red Raiders' football team for the past two years, had a strong overall game against the Surfriders with nine points, seven rebounds and three steals before fouling out with 4:02 left in regulation.

"It's because of his defense where he's going to get a lot of layups, and he showed that tonight. He was great on defense and because of that, he had a lot of wide-open layups and fast break opportunities."

Sauvao drew the assignment of Kailua sophomore guard Everett Torres-Kahapea and held him without a point in the first half as Kahuku took a 23-14 lead at the break. Torres-Kahapea eventually caught fire in the second half to finish with a game-high 17 points, but by then, the Red Raiders were firmly in control.

"Coach basically puts me on their best shooter and whoever scores a lot of points on the other team," said Sauvao. "It's good because I know he has a lot of faith in me in that I can lock down and play defense. I'm glad coach trusts me."

Kailua's game plan to slow the game down got the best of Kahuku in the early going. The Surfriders were able to work for good shots and keep pace with the Red Raiders, and trailed by just one, 11-10, after the first quarter.

Then Kahuku turned the pressure on. A mixture of press, tight man defense and traps in the second quarter helped the Red Raiders outscore Kailua, 12-4, in the frame. Kailua also went without a field goal until the 1:15 mark of the stanza.

"I think at times, we weren't aggressive enough, and then in other times of the game we were really aggressive," said Akana. "We just talked about how we have to keep the intensity up and come out a little more aggressive on defense."

New Zealand transfer Daniel Fotu also played a big role in the Red Raiders' strong defensive performance. The 6-foot-8 junior stepped into the lineup in the second quarter to give Kahuku a sentry at the rim.

With Fotu protecting the basket, Kahuku's perimeter defenders could hedge up higher on their mans knowing that Fotu can clean up whatever gets past them.

"It's good to have Dan because when we get beat, we can rely on him to cover us and get our backs," said Sauvao.

"Our defense was good, it could be better, but we really kept them from scoring," he said.

Sauvao and Fotu were the biggest driving forces for the Red Raiders' defense, but there were a lot of other cogs that should not go unnoticed.

Samuta Avea, who signed with the University of Hawaii, followed 6-foot-4 Zachary Marrotte the entire night and forced him into seven turnovers. Kesi Ah-Hoy and Taimoana Wright combined for five steals and helped the Red Raiders hold Kailua post Christian Mejia to 2 of 10 shooting from the field.

Even when Kahuku emptied its bench in the fourth quarter, there was no shortage of defensive highlights. Reserve big Stennett Alapa got involved in the Red Raiders' block party with under a minute to play and freshman Robbie Sauvao turned a steal into a layup at the buzzer for the final points of the game.

An aggressive defense doesn't come without its consequences however. Sauvao picked up his final foul midway through the fourth quarter, Avea had four fouls of his own and three other players had three fouls each.

Akana was vocal about the disparity in fouls called during the second half — Kahuku had 21 total fouls to Kailua's 12 — and even drew a technical foul after one of his players wasn't awarded a shooting foul, but viewed the way the game was called as a learning opportunity for his players after the contest was over.

"I think with this type of game game, there has to be a time where you learn how to play in foul trouble, and unfortunately tonight we got a lot of calls against us, but I still wanted them to play good defense and still be able to be in the game," he said. If they got three fouls, four fouls, you still got to play and we're trying to get better (to) prepare them against better teams."

Kahuku will look to pick up its third straight league win when it travels to Castle Friday night.