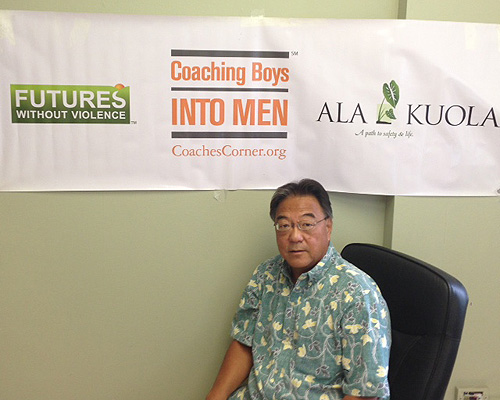 Edwin Flores is the Executive Director of Ala Kuola, a non-profit organization in Hawaii that helps domestic abuse victims acquire Temporary Restraining Orders (TROs) against their abusers. The organization also implements an educational prevention program called Coaching Boys into Men (CBIM) that was created by Futures Without Violence based in San Francisco, CA. Courtesy Ala Kuola

Football is an emotional, aggressive sport and players are taught to play through the whistle and to be tough. But when the lights go out and players step off the field, how do they make sure that aggressiveness doesn't permeate into their personal lives— whether at home or in their own relationships?

That's where Ala Kuola and Coaching Boys Into Men come in.

October happens to be National Domestic Violence Awareness Month and Ala Kuola is a non-profit organization in Hawaii that helps domestic abuse victims acquire Temporary Restraining Orders (TROs) against their abusers. The organization also implements an educational prevention program called Coaching Boys Into Men (CBIM) that was created by Futures Without Violence based in San Francisco, CA. Coaches all over the world use the program and the goal is to educate male teen athletes on building and creating healthy relationships with their significant others and families without having to resort to violence and abuse.

"In 2013 we picked it up and I said we're going to be running with this and I knew there were going to be growing pains. I saw Wendell Say one afternoon and asked him if he was doing CBIM and he was, but didn't have anyone to do it with and he asked if I wanted to do it with them and I said I wanted to pick it up. I contacted Futures Without Violence and signed the license agreement to use it. I said we're going to try and sustain this and Wendell has put me in touch with guys and it started to grow," said Edwin Flores, Executive Director of Ala Kuola.

Recently in the media there have been stories involving professional athletes and domestic violence and a lot of young male student-athletes look up to these players.

"I was on Hawaii News Now Sunrise and Steve Uyehara asked me that question. My response was that these guys are their Sunday heroes; they want to emulate these guys," said Flores. "What they're seeing is something they haven't seen before and I think the kids are getting it now and coaches are talking about this. I talked to a couple coaches and they said these are teachable moments. They don't have to follow the script exactly in CBIM, but they bring up these references to what's happening today and a lot of guys have been using this as their teachable moments."

"It's about everything you see in the media – from Ray Rice to the situation here with the police officer and the kids are aware of it because they are on these social networks," said Aiea coach Wendell Say, who works as a counselor at the high school.

"Football is a sport that captivates and motivates an audience and when these players see them in the news, it's a topic that hits home and they can relate to it," added Castle coach Nelson Maeda. The Knights implemented the program this past season for the varsity and JV teams.

Although the seasons ended for Aiea and Castle, the values the players learned throughout the course of the season goes beyond the wins and losses.

"Wendell has been a pioneer and a champion for this thing and I don't know how to thank him," said Flores. "He made the most powerful statement we have on our website and he said last year after their game against Mililani, the boys told him, "We may not have won many games, but we built character" and the room got quiet when he said that."

According to Flores, several Oahu Interscholastic Association Division I and Division II schools as well as some Neighbor Island schools from Kauai to the Big Island installed the CBIM curriculum for their athletic programs. The football coaching fraternity in Hawaii is very unique and CBIM was able to spread to different schools through word-of-mouth. Although it's currently football season, he hopes that he can engage coaches from other sports to adopt the program for their teams.

"What we do there's no cost to the team to do this and we provide them the materials. We make teams a banner with their high school logo along with a small logo of our own and we tell the coaches to put in their stadiums when they play their games to let people in the community know you are engaging in this, taking a stance, and teaching these boys. That's satisfaction to me," said Flores.

Coaches go through training and they receive lesson cards providing topics to discuss with their teams. Topics can range from being respectful toward others to personal accountability. Other topics include digital disrespect with camera phones, social media, insulting language, understanding consent and when aggression crosses the line.

"One of the coaches told me a girls' track team was walking onto the field one day and he stopped practice," said Flores, on a situation that happened before. "He called the boys in and I guess there was catcalling or comments were being made and he felt it was serious enough that these kids were being disrespectful. He didn't want his team to be like that."

It's up to the coaches on how they want to present the material to make it relatable and when to present these topics to their team.

"Every year we do it and they listen and learn. Once a week, every Wednesday we cover lessons about 30 minutes before practice. It doesn't take too long to do," said Say.

"We also intertwine these lessons with the lessons our team's spiritual advisor, Ellie Kapihe, teaches and we try to keep it short and to the point, maybe five to 10 minutes after practice or when they huddle," said Maeda.

Both coaches like the program because of the values it teaches and the players seem to embrace it and some can relate to it personally.

"The players have responded well, hung in there, and have accepted the messages. (CBIM) teaches about domestic violence and it's been good since this brings awareness because it happens in the NFL, to movie stars, rappers, etc. A lot of our players come from single parent and low-income homes and they see domestic violence in the housing areas," said Say.

"Some players have been victims or spectators of domestic violence and a couple can relate to it and it hits home. This kind of stuff empowers them with knowledge and realize that's not what they should be doing," said Maeda.

The lessons learned through playing sports goes beyond the game and coaches hope their players and many others who participate in the CBIM program can apply it to their lives and raise awareness.

"It's not talked about enough and no one really talks about this kind of stuff, but you have men – coaches engaging in stuff like this. The bottom line is these are men talking about these issues, usually you hear people from domestic violence organizations talking about this, but for CBIM you hear it from a coach and a mentor talking about this and that's unique," said Flores, on why CBIM has a bigger impact on these kids.

"We did have a female on the team and it made them aware of what they do or say and their attitudes towards women and girls. It teaches them respect towards females, to find peaceful solutions and it promotes awareness," said Maeda.

Winning games and championships are always rewarding for any team because of the body of work that is put into the season. But when it's all said and done, for teens that learn these values and lessons and apply it to their personal lives to become good boyfriends, future husbands, fathers and productive members of society would be more gratifying for any coach.

"A lot of these kids play sports and just because you have strength, you shouldn't use it the wrong way," said Say.

"The main goal is to leave our program better than how you came in. The work ethic and attitude they learn from our program carries off the field too so they can become contributing members of society," said Maeda.

Finally, Flores doesn't want to take all the credit for the growth and sustainability of CBIM. Instead he feels the credit should go to the coaches and some athletic directors, such as Kelly Sur (Radford) and Mark Brilhante (Kalaheo) because they are the ones who are reaching out to their players and making a difference for their teams, schools, and communities.

"Guys like Wendell Say, Amosa Amosa (Campbell), Darren Hernandez (Kapolei), Nelson Maeda, Rod York (Mililani), Greg Taguchi (Kalani), Fred Salanoa (Radford), Dave Baldwin (Hilo), etc. have presence with their boys and have standing in their communities too and that's important," said Flores, who wanted to recognize several coaches who use CBIM. "Some coaches asked me to speak to their teams about it, but I explain to them that you have a powerful voice and if it comes from that coach in particular, it means something. I tell them they can contract me or my staff to speak to their team, but it doesn't mean anything. You guys do this because you are their mentors and they play for you."

Photos from the 2022 Oahu Interscholastic Association Awards Banquet Friday night at the Ala Moana Hotel...

Senior outside hitter helped lead Moanalua to 15-1 record and runner-up finish in Division I tournament.