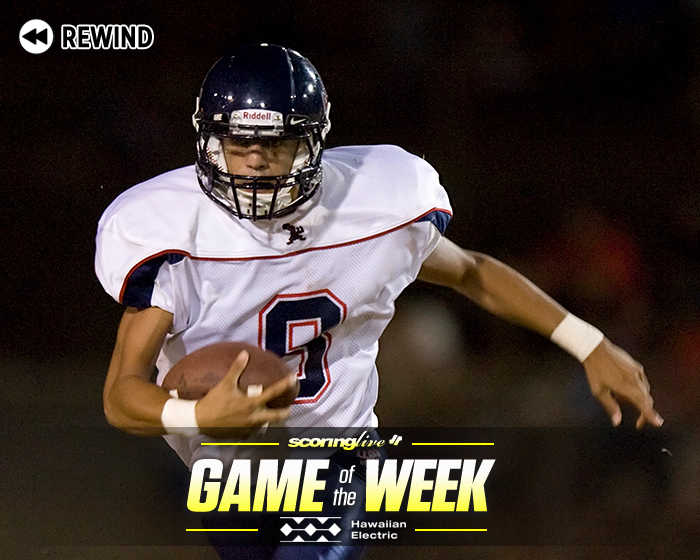 Saint Louis QB Marcus Mariota threw for 282 yards on 25-of-44 passing with one interception and also ran for a high-team 82 yards on seven carries in a road loss to Kahuku on Aug 27, 2010. Eugene Tanner | SL

It was the third game of the season in Arceneaux's second go-around as football coach at his alma mater, Saint Louis.

Of course, the opponent was Kahuku.

"That drive out there — Saint Louis travels well, so there were a lot of our fans there and it was packed — and the atmosphere of that place was exciting," Arceneaux reflected.

Although he recalled the game and its lead-up with vivid memory, the matchup actually took place a decade ago, on Aug. 27, 2010 at Kahuku's Carleton E. Weimer Field.

At the time, the Crusaders were in the midst of a seven-year drought since their last state championship (2002), while Kahuku was coming off of a state runner-up finish in 2009; it had been three seasons since the Red Raiders last claimed a title (2006).

The reigning state champion at the time? Kamehameha, which had just captured its second state crown in six seasons.

Both Saint Louis and Kahuku came into the non-league matchup with identical 2-0 records. The Red Raiders began the year with a 27-7 win over Waianae, followed by a 54-25 thumping of Kailua. Meanwhile, the Crusaders — with future-Heisman Trophy winner Marcus Mariota at quarterback — coasted to lopsided victories over Roosevelt, 48-8, and Waianae, 42-3 — prior to their visit to the North Shore.

"They were the top dogs," Arceneaux said of the Red Raiders. "I think Kahuku came in with a physical mentality and that was one of the things that we had to try and match." 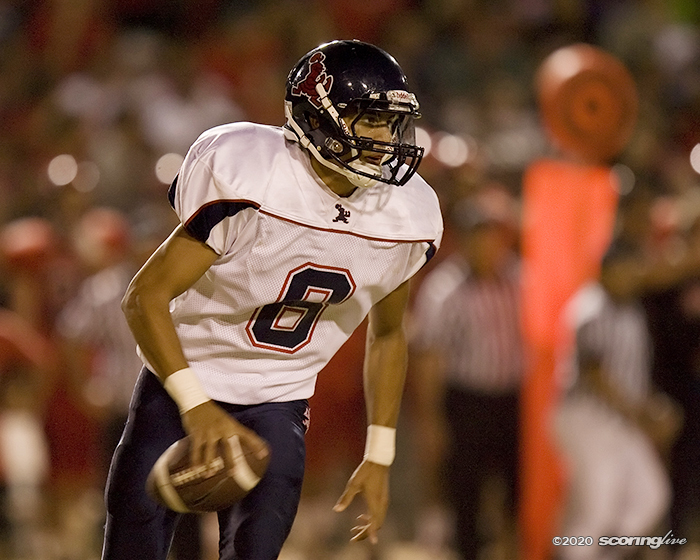 But just two plays into the game, it was speed — namely Mariota's — that appeared to be the biggest of mismatches. The 6-foot-5, 190-pound senior left the Kahuku defense in his dust on a perfectly-executed read-option play for a 52-yard touchdown run.

The teams went back and forth for much of the first half. A 36-yard Jesse Correa field goal with no time remaining on the clock sent the Crusaders into halftime facing a 21-20 deficit.

After the intermission, however, the tide turned Red in a Big way. 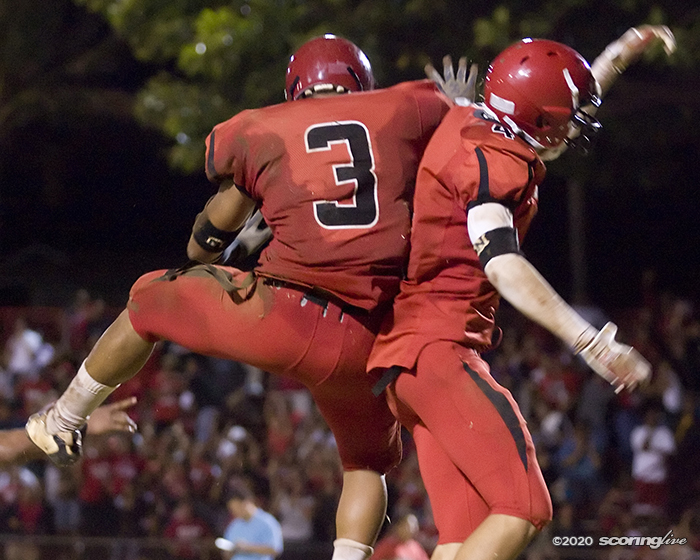 The Red Raiders scored 28 straight points — including a blocked punt returned for a TD — to take a commanding 49-20 lead.

Saint Louis scored a late touchdown on a short TD pass from Mariota to Duke Bukoski, who finished with six receptions for 101 yards.

Mariota threw for 282 yards on 25-of-44 passing with one interception. He also ran for a high-team 82 yards on seven carries.

"We didn't really open up the playbook much. At that point we were still working on continuity," said Arceneaux, who was also the team's offensive coordinator.

"It was the start of my second stint there at Saint Louis and I had put together a pretty good staff. It was my first time working with Marcus and I was just looking forward to coaching that offensive unit," he added.

Arceneaux, who as a player led the team to three straight Oahu Prep Bowl titles — all at the expense of the Red Raiders — before going on to a decorated collegiate career at the University of Utah, was just 25 years old when he was selected to lead the Saint Louis football program in 2003. He coached the Crusaders to the state final that season, his only one there before he left to pursue a teaching certification.

Then in 2010 the opportunity to return to Kalaepohaku arose and Arceneaux seized it.

"It's funny because my story with Kahuku is that I beat them three years in a row — as a sophomore, junior and senior — and my senior year we beat them, 27-26, and then my first year I coached at Saint Louis (in 2003) and we played them in the state final and we lost, 27-26," Arceneaux recalled with a chuckle.

The final score of that 2010 non-league game? 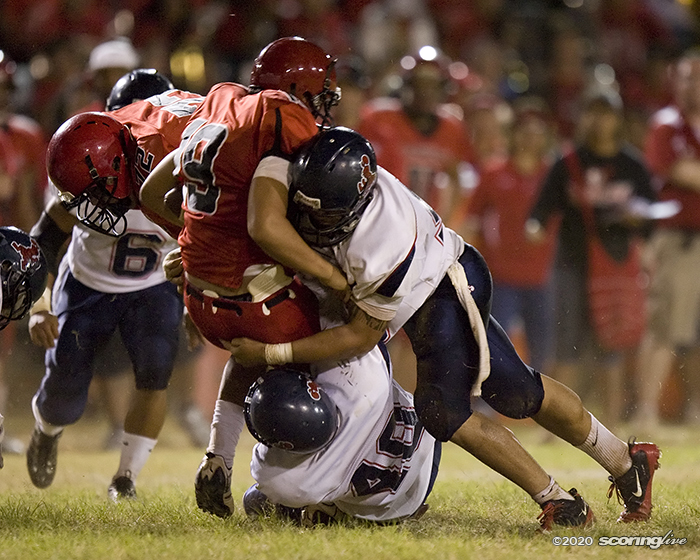 "There's just something about that number, but looking back on it it's just so neat the rivalry that I had with Kahuku and then even afterward, going on and working with (former Kahuku coach) Doug Semones was special, so Kahuku and Saint Louis have always been intertwined, so it's always been a neat little relationship," Arceneaux said.

Semones went 68-14-2 in seven seasons as coach of the Red Raiders from 1989 through 1995, including four OIA titles in that time. He later spent four of his 12 total seasons at Division-III Occidental (Los Angeles) as coach of the Tigers before retiring in 2017.

Arceneaux spent three seasons under Semones as quarterbacks coach at Oxy and one as offensive coordinator.

But back to the game itself.

The Crusaders finished with 386 yards of total offense, but had several costly miscues on special teams throughout the night. 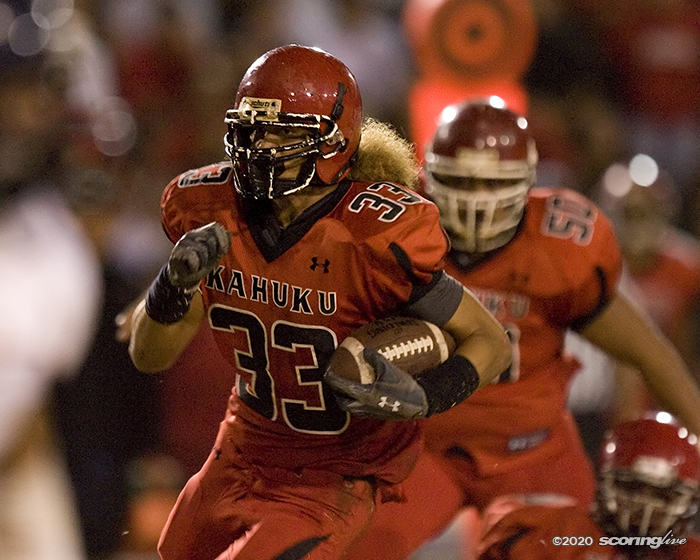 Aofaga Wily's 124 rushing yards and two touchdowns on 19 carries set the tone for the Red Raiders, who averaged 5.8 yards per carry and finished with 209 rushing yards as a team.

"They hit us in the mouth and we had to respond and I think having that adversity early in the season really helped us jell as a staff and as a team," Arceneaux said.

The coaching staff that Arceneaux put together included his brother, Anthony, as well as former University of Hawaii players Matt Wright, Laanui Correa and Leonard Lau — who is now interim coach at Punahou.

"We got off to a good start offensively, but we weren't defensively sound at that time. We got a lot of people into that game and mostly importantly we wanted to come away not beat up, so it wasn't most important to win that game, but it gave our kids something to build upon as we went forward and the best thing about it was as that season went along, we came back and we made the right adjustments," he added.

Saint Louis went on to win its final nine games of the season following its 22-point loss at Kahuku. It was the lone blemish on the season for the Crusaders, who finished 11-1 and claimed its first state championship in the classification era.

Sadly, the 2010 season is most notably remembered a decade later for the rematch that never happened.

Just days after Kahuku rolled to a 46-16 win over Leilehua in the semifinals of the OIA tournament, it was discovered that an ineligible player was used in multiple games earlier in the season. As a result, the Red Raiders — who were ranked No. 1 in the ScoringLive Power Rankings at the time — were forced to forfeit its spot in both the league final and the state tournament.

"Unfortunately we didn't get that matchup to, not have some revenge, but I think at the end of the season that's what you gear up for and I really believe at the end of the season we were playing our best football," Arceneaux said. "I always tell my kids that we can only control what we can control and whoever was on the other side, we were going to play. Unfortunately, it wasn't Kahuku. We didn't have that opportunity, so we prepared for Waianae and it was probably our best week of practice."

After a 42-28 win over Leilehua in the state semifinals, the Crusaders marched to a 36-13 victory over the Seariders in the title game behind Mariota's 230 passing yards and three touchdowns. 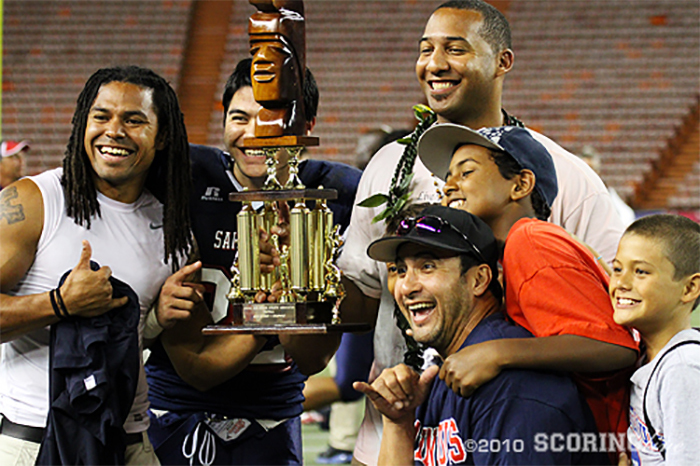 "After the game I just looked at the staff and my brother and it was just a real testament to those guys and the sacrifice that they made, along with the team moms and all that they sacrificed. At that point it was out of being about me and it was just so gratifying seeing the kids jump around and the coaches hugging each other; I think it all sunk in when we sang the alma mater," said Arceneaux, who further reflected upon his long history with the school.

"For all the things that Saint Louis did for me, after missing so closely in 2003 — when we missed a late field goal by about a foot — and then being able to come back and and help us win a state championship in 2010, was just amazing and it's really more about the other people who were there. There are so many people involved behind the scenes that were a part of this and I think that's where I really started to understand when your athletic department is on the same page and treating kids with professionalism and having the same goal and loving them, it all works out and things fell in line for us. It was one of those years that it all just fell in place for us," Arceneaux said.

That experience lended Arceneaux an opportunity to get a taste of what his life is about now: athletic administration. He is the new athletic director at Waialua, where he has hit the ground running since his hiring in February.

"We've re-done our football field, Marcus (Mariota) gave us a grant and we re-did our weight room, re-did our concession stands and it's a great community out in Waialua, so I'm looking forward to building our programs and keeping our kids in Waialua. It's going to be a challenge always at a small country school, but I think my coaches are ready and I'm excited about being a part of the Waialua community and building something that is special," said Arceneaux, who spent the last two years as offensive coordinator at Servite High School in Southern California.

Arceneaux, now 42, believes that all of his life experiences — including his missteps — have helped prepare him for this job.

"It's crazy, man, but I've probably made every mistake a man my age can make and I think you learn from those mistakes and you grow from those tough times," he said. "I've got a great wife (Nicole) and three great kids (Chloe, Cole and Elle) that have allowed me to journey through this coaching career and put me in different experiences that have made me ready for this at Waialua and the future."