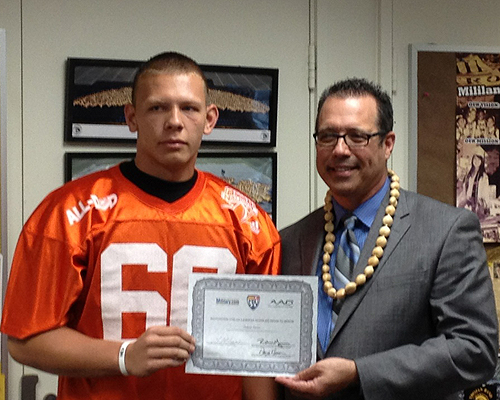 MILILANI – Mililani junior football player Dakota Turner was honored Tuesday morning as one of 24 selectees worldwide to the Department of Defense All-American Team.

The ceremony included a jersey and certificate presentation by Dr. Randy Plunkett of Military.com, which in association with All-American Games and Football University produced the inaugural team.

"It's only open to children of military members, so that's the difference between that and the Army All-American Game, which is open to all high school players," said Plunkett.

Other conditions of eligibility included a minimum 3.0 grade point average, being an active member of the community and a recommendation.

"The process was they submitted videos – there were 60 submissions – and 24 worldwide were selected by some retired NFL players and coaches," Plunkett said.

Turner, who is 6-foot-3 and 250 pounds, said while he appreciates the award, he understands there is still much work to be done.

"I still have a lot more things down the road for me, but this lets me know that the hard work has paid off," Turner said. "I'm going to keep working hard, of course. The biggest goal right now is to win states and get the team ready for the upcoming season. It's my senior year, so I'm going to make it my best and end on a good note."

"It's Dakota's hard work and determination that earned him this award. His work ethic is just unbelievable," York said. "This award is not only big for Dakota, but big for Mililani and the football program. It's a testament to his parents and his family background and his family's dedication to the military."

Turner's father, a Lieutenant Colonel in the U.S. Marine Corps, was among several family members in attendance Tuesday.

"The military has been with me for a long time, my dad has been in for over 20 years," said Turner, who was the lone selectee from the Pacific region and first from Hawaii. "This award is cool because it shows military kids around the world are athletic and that they're out there with the other kids and they can prove themselves and their abilities."

Plunkett praised Turner for his willingness to learn and eagerness to improve.

"I think that he has a great reputation for being coachable," Plunkett said. "He's a very assertive player, a polite gentlemen and a testament to serving his country, like his parents are."

Turner said he has yet to receive any scholarship offers, but has drawn interest from Oregon, Washington State, Arizona State, Colorado, UCLA, Vanderbilt, Missouri and Army. He is projected to play defensive end or middle linebacker in college.

Mid-Pacific starts fast, then holds off Damien to notch first win of season

Ethan Escobido leads the way with 23 points for the Owls, to snap a three-game skid in league play.