Top Performers
Ah You's versatility, athleticism matched by his will to win 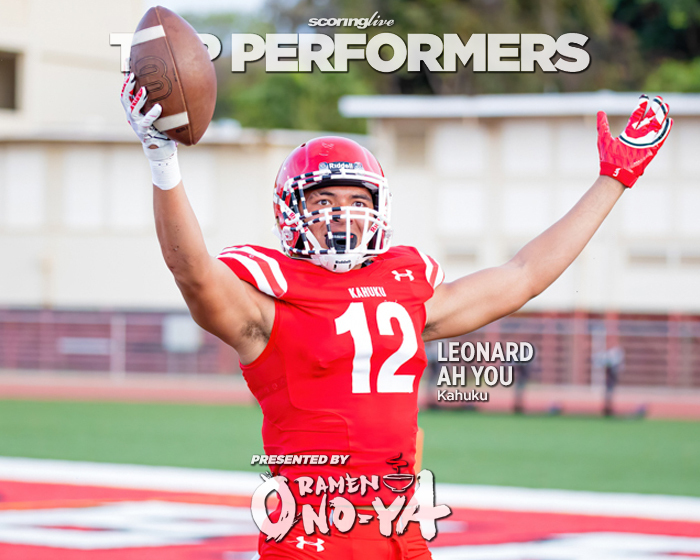 The will to win is well within Leonard Ah You.

That was evident not just by the play of the Kahuku senior this football season, but by his leadership as well.

"When it comes to Leonard, it's a combination of God-given talent and work ethic just as much as it is heart," Red Raiders coach Sterling Carvalho said of the 6-foot-3, 215-pound linebacker.

Ah You, a second-year starter and team captain, earned All-Hawaii recognition as a junior last season and was one of four Kahuku defenders named to the First Team. He has nearly a dozen scholarship offers from FBS schools, but for all the accomplishments and accolades Ah You has to his name, Carvalho said it's the desire to succeed that sets him apart from others.

"I think his will to be the best on the field separates him from a lot who are just as good as him. There may be guys stronger or faster than him, but he just has that will that ‘no one will stop me. I'm gonna make this sack, I'm gonna make this tackle' and he just wills himself to make plays," Carvalho described.

Instincts and versatility also make Ah You a special player, his coach continued.

"He just has a nose for the ball and is just a great football player. He has a passion for the game, he's a hard-nosed player and he's just very versatile — he can play linebacker, drop into coverage and because of his frame he doesn't look like he can get down and dirty in the trenches, but that's where everyone is wrong," Carvalho said.

Still impressed with Kahuku's defense over Punahou in the Red Raiders' 20-0 win, the first-ever shutout in an Open Division title game.@LeonardAhYou's strip and recovery at the goal line in the fourth quarter preserved the goose egg for the Red Raiders. pic.twitter.com/aTl4AtGF0n

Ah You recorded a half-dozen sacks this season and 10 1/2 tackles behind the line of scrimmage. He also came up with six pass break-ups and one interception, in addition to three forced fumbles and three fumble recoveries on the year.

"He can come off the edge and it's like if we don't get a sack from him a game, it's unheard of. He can play the end, he can play the middle, he can drop into coverage and he's very rangy because of his frame and his athletic ability," Carvalho said.

In the two seasons that Ah You has been on the team, Carvalho pointed to his ability to get home to the quarterback as the area he has shown the most improvement.

"Last year, I think he might have led the state in sacks, so he's just dedicated to his craft and because he knows he's not the biggest and he's not the strongest, a lot of the things he does is his technique, using his ability to get to the passer," Carvalho said.

Although Ah You did not record a sack in Kahuku's 20-0 win over Punahou in Friday night's Open Division state final, he still managed to put his wide array of skills on display. Ah You was in on three tackles, including two for losses, had one quarterback hurry and a pass break-up, but his most impactful play came midway through the fourth quarter and brought a 15-play, 82-yard Buffanblu drive to a screeching halt.

On third-and-goal from the Red Raider 2-yard line, Punahou gave the ball to running back Iosepa Lyman, but he had the ball jarred loose by Ah You, who also recovered the fumble at the 3 to keep the shutout in tact.

"All week long, (Ah You) and the captains were just harping on ‘doing your job.' If everybody did their job, they knew they were gonna pitch a shutout," said Carvalho, who credited the leadership of Ah You, along with fellow defensive captains Brock Fonoimoana and Liona Lefau.

"They're always the first in line to do a drill, they're always going all out in everything that they do and they just don't lead by yelling, they lead by example," Carvalho said.

The trio are among the team leaders who have established an unselfish culture of shared celebrations, while shying away from individual recognition.

He went on, "Everybody comes to practice, everybody pays the price — our scout (team) works so hard — so it's great to hear that those captains of ours, those leaders would have rather have championships as a team than individual awards. They know that individual accolades should not indicate how great our team is, but the victories and the success that we have is more important to them; all of them would rather be state champions over First Team All-State."

The Red Raiders put together a defensive masterpiece against the Buffanblu Friday. The ILH champions were averaging more than 43 points and 425 yards per game offensively; they were limited to only 197 total yards, including just 62 rushing.

Quarterback John-Keawe Sagapolutele completed fewer than 50 percent of his pass (16 of 33) for 129 yards. Punahou was only 3 of 12 on third downs

"It was just total domination on all three levels. Offense had over 400 yards, defense pitched a shut out, special teams kicking field goals and giving us great field position — it was just a dominant team effort," Carvalho assessed.

Ah You, who is also on the basketball and track and field teams at Kahuku, is rated a three-star recruit by both Rivals.com and 24/7Sports. Among his scholarship offers are Utah, BYU, Arizona, Oregon State and Hawaii; He has yet to announce a commitment.

Lefau (Texas), Fonoimoana (Utah) and Kainoa Carvalho (Utah) announced their college commitments over the summer, but Ah You managed juggle his ongoing recruitment with the grind of the 17-week prep season.

"Even though Leonard didn't commit, he was still focused on the season. In fact, he didn't even take an official visit yet. The rest of the guys did during that three-week bye we had before states, but he didn't so that shows that he is committed to this season. They were all-in, he was all-in and when the season is done, then he'll make his decision," Carvalho said.

As for the Red Raiders, they finished the season with a 12-2 record and their only losses at the hands of nationally-ranked St. John Bosco (Bellflower, Calif.) and Saint Francis (Baltimore). Friday's blanking of the Buffanblu gave Kahuku its record-10th state championship.

Carvalho's squad outscored its final three opponents — No. 3 Mililani, No. 4 Campbell and No. 2 Punahou — by a combined 87 to 7.

"They're great teams, but the way our team plays when it counts, I mean, it's unbelievable and so that's the feeling, that we got the best team in the state and we proved that over the last three games. It was just a great win to really show the state how great this team was," Carvalho said.

Blaze Kaululaau, Nanakuli — Scored 17 points in a loss to Castle

Justin Yap, Maryknoll — Scored 26 points, including six 3-pointers, in a win over Kaiser

Keoki Alani, Konawaena — Threw for 256 yards and two touchdowns on 27-of-36 passing with one interception in a win over Waipahu

Zedekiah Anahu-Ambrosio, Konawaena — Caught two touchdown passes and ran in another touchdown in a win over Waipahu

Kameron Apilado, Waimea — Ran 11 times for 228 yards and two touchdowns in a win over Kekaulike

Mykah Brun, Waimea — Scored on a 31-yard fumble return for touchdown, made 1 1/2 tackles and registered a pass break-up in a win over Kekaulike

Kainoa Carvalho, Kahuku — Caught nine passes for 79 yards in a win over Punahou

Chray Flanary, Konawaena — Scored on an 81-yard blocked field goal return for touchdown and made three tackles, two for losses and one sack in a win over Waipahu

Vaaimalae Fonoti, Kahuku — Ran 23 times for 112 yards in a win over Punahou

Faapaia Fualema, Waipahu — Made 10 tackles, including 2 1/2 for losses in a loss to Konawaena

Brock Higashi-Sojot, Waipahu — Made 11 1/2 tackles, including one-half for a loss in a loss to Konawaena

Caleb Lauifi, Waipahu — Made six tackles, including two for losses and one sack and recovered a fumble in a loss to Konawaena

Liona Lefau, Kahuku — Made six tackles, forced a fumble and broke-up a pass in a win over Punahou

Chazen Rodillas-Vesido, Waipahu — Caught seven passes for 101 yards and a touchdown in a loss to Konawaena

Seth Setu, Waipahu — Made 8 1/2 tackles, including 3 1/2 for losses with one sack in a loss to Konawaena

Anieli Teleaai, Waipahu — Ran 14 times for 102 yards and a touchdown and caught three passes for 68 yards in a loss to Konawaena

Eli Uemura, Konawaena — Made 2 1/2 tackles for loss and two sacks in a win over Waipahu

Liatama Uiliata, Waipahu — Threw for 222 yards and two touchdowns on 13-of-29 passing without an interception and ran for a touchdown in a loss to Konawaena

Terahiti Wolfe, Punahou — Made 9 1/2 tackles, forced a fumble and recovered a fumble in a win over Kahuku