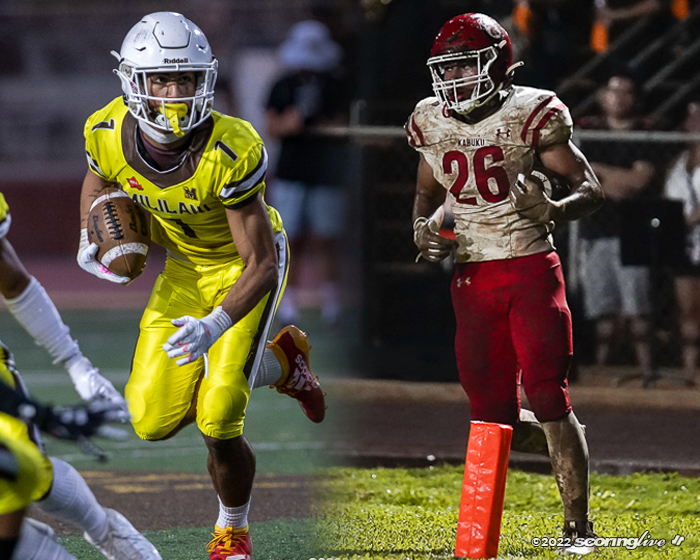 Two of Hawaii's best teams will take on the top two teams in the country this weekend with Mililani and Kahuku making the trip to Los Angeles this week.

The Trojans will face the Mater Dei Monarchs on Friday while the Red Raiders will square off against the St. John Bosco Braves on Saturday in the third annual Trinity League vs. The USA showcase. Both games will be held at St. John Bosco's Panish Family Stadium with kickoff slated to start around 4:00 p.m. Hawaii Standard Time on Friday and 4:30 p.m. on Saturday.

Coach Rod York said the Trojans are excited for the challenge to take on the Monarchs, who won the national football championship last season.

"Iron sharpens iron," he said. "We know that it's a big task ahead, but any time you play these types of teams, they're going to show your weakness real fast and make you pay for them. Just putting our kids through adversity and seeing how we respond … it's going to be a great experience for us."

"This opportunity to play against Mater Dei is huge for all of us," he said. "Coming from Hawaii, we don't really get much exposure so playing against the No. 2 team in the nation will give us that exposure we need. Also, playing against a big team like this will test us to see how we can come together as one team and play for each other."

Before the matchup on Friday, the Trojans were able to tour the University of Southern California and watch its football team practice on Tuesday. They also were joined by the Red Raiders when they did a similar tour at UCLA's campus on Wednesday.

"We have one goal coming up here and that is to beat Mater Dei. We must all have a good mindset coming into this game and that all starts with how we practice. On our USC visit Tuesday, we learned that the practice should be player led. We must hold each other accountable for all our mistakes and uplift each other when we make plays.

"We are looking forward to prove all of the people doubting us wrong by beating a powerhouse team and show that them that Hawaii kids can play ball."

Kahuku's opponent, St. John Bosco, have won three state titles in California since 2013 and last won the national championship in 2019.

Meanwhile the Red Raiders, who won the Open Division state title last year, are taking in a 15-0 game winning streak into their matchup against the Braves.

Kahuku also has a home matchup on Sept. 30 against St. Frances (Baltimore), who is the third-ranked team in the country according to MaxPreps.

"If we want to know where we really stand, you got to play the best and we're looking forward to this opportunity," said Carvalho.

The Red Raiders won't be at full strength however as Carvalho confirmed that reigning Offensive Player of the Year in wideout Kainoa "Kaikai" Carvalho is still healing up from an injury. Still, the Red Raiders have been able to plug-and-play with others filling the void.

"Everyone else is stepping up and it's just a great example of what our team is," said quarterback Waika Crawford. "We always believe that it's the next man up. We just have to move on and continue to do what we're going to do."

Regardless, the Red Raiders' mindset is clear.

"All I gotta say is we're just trying to shock the world," said senior linebacker Leonard Ah You. "They're the No. 1 team in the nation. We just got to go out there and do our thing."

The Menehunes came up with big stops on defense all afternoon and pieced together a key drive on offense...

Kalaheo rolls by McKinley to pick up first win

Alika Amasiu threw two TDs, rushed for another and Elijah Taylor had a rushing TD and kickoff return...

Kaimuki posted a 19-point second quarter, but Kaiser outscored the visitors 21-6 after halftime to get...

No. 2 Punahou defeats No. 13 Kamehameha in one-sided affair

Buffanblu never punted in the first half and led 45-0 at the break to deny the Warriors of their first...

Uiliata lifts No. 11 Waipahu over Roosevelt