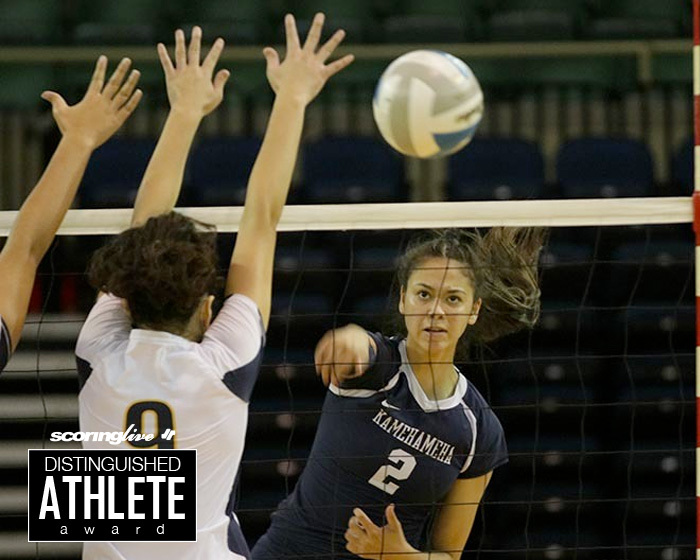 The past year of Devin Kahahawai's life has been quite the whirlwind.

Whether it was helping the United States to a couple of medals in international volleyball competitions or leading the Kamehameha girls to yet another state championship, the ubertalented outside hitter left her mark on everything she had her hand in.

Kahahawai, a four-year varsity letter-winner for the Warriors who will play for the University of Texas in the fall, was selected by the ScoringLive staff as the female recipient of the Distinguished Athlete Award for the recently-completed 2021-2022 school year.

"Honestly, it's an honor because in Hawaii there's so many amazing female athletes and to be the Distinguished Athlete of the Year, it's just insane and I'm so thankful for my coaches and teammates that have helped me along this journey," Kahahawai said in a recent phone interview.

Kahahawai's senior year of high school began last summer, as she was dually-preparing for the upcoming prep season in addition to the FIVB U-18 World Championships in Durango, Mexico. She helped Team USA capture a bronze medal in September and later fueled Kamehameha's run to its record 23rd state title in December.

"It was definitely a struggle in the beginning, I'm not gonna lie," Kahahawai admitted. "Having to come to school and start training for school ball, then leaving for my official (college) visits for three weeks and then I came back for a week, then I left for Mexico for three more weeks."

With a spotty internet connection while in Mexico, Kahahawai struggled to maintain her school work. Upon her return to the Kapalama campus, she had to work doubly hard to catch up.

"School was definitely hard. I had to ask my teachers for a lot of extentions and I had to skip maybe one practice a week to go meet with my math teacher, or my science teacher and catch up," said Kahahawai, who missed her own graduation ceremony in late May in order to train with the U-21 Women's National Team in preparation for the Pan American Cup in early June, again in La Paz, Mexico.

"I finished up with school a week early to go tryout for the U-21 team and it was definitely a struggle, but I wouldn't trade it for anything," Kahahawai said.

Team USA went 5-0 at the Pan American Cup to win gold; Kahahawai relished the opportunity to once again represent the country on the international stage. But despite her lofty achievements in the game of volleyball, Kahahawai can still reflect with great fondness the first time she had the honor of donning the navy blue and white Kamehameha jersey.

"That was four years ago," she recalled. "I want to say my first game was the Kamehameha preseason tournament and that was the first time I ever put on a Kamehameha jersey. I remember sitting in the locker room and we took a picture. It was so much fun; I'll never forget that."

Kahahawai feels fortunate to have been teammates with such standouts as sisters, Braelyn and Keonilei Akana, who went on to play at the University of Hawaii and Nebraska, respectively, as well as future-University of Pittsburgh setter Lexis Akeo and future-UNLV libero Paris Oliveira.

"It was a little scary. I was young and it wasn't the most comfortable thing for me, but becoming part of this program with those girls, it made that freshman season one of my most favorite seasons," Kahahawai said.

Another one of Kahahawai's teammates that season was then-senior middle blocker Kalina Obrey, who was recognized as All-Hawaii Division I Player of the Year in her primary sport of basketball later that year. Obrey was eventually tabbed as ScoringLive's Female Distinguished Athlete of the Year the following June.

A year later, it was Keonilei Akana – who goes by the nickname Kaylei – who earned the distinction. Consequently, Kahahawai is the third consecutive Female Distinguished Athlete of the Year from Kamehameha-Kapalama.

"It's awesome," she said. "I mean, Kalina started a legacy and then me and Kaylei kind of followed and to have two Kamehameha girls win it in the past, it's awesome for the program, the school and the next generations to come; it's just amazing."

Kahahawai and Kaylei Akana will be reunited this fall for the Texas Longhorns. Akana, along with former Iolani School standout Saige Kaahaaina-Torres, are incoming transfers from Nebraska and Utah, respectively.

"I'll have Kaylei and Saige with me so it's pretty awesome to have other girls from Hawaii and for the three of us to represent the Islands and for Kaylei and me especially to represent Kamehameha is amazing and it'll be exciting to wear the Texas jersey," Kahahawai said.

While she will be wearing burnt orange and playing volleyball on the continent soon enough, Kahahawai is grateful for the invaluable experiences that came with participating in high school sports.

"For me personally, high school sports was about making memories with the girls on my team. I don't even think of them as my teammates, they're more like my sisters. These past four years I've developed so many relationships and high school sports is just a way to have fun, getting to play under the bright lights and on TV … it's an exciting opportunity that I'm so grateful for," Kahahawai expressed.

But all of the success – both of the individual and team variety – did not come without some serious sweat equity, she noted.

"People don't see what goes on behind the curtains, how our whole team is putting in the work -- running on the track, lifting in the weight room – honestly, what we do in practice is everything," Kahahawai explained. "The girls on the bench might not get into the games, but in practices they really push us and it's everything that we put in off the court and behind the scenes during practices that is pivotal to our success."

Kahahawai cemented her legacy at Kamehameha with her recent induction into the prestigious HHSAA Hall of Honor, which has recognized the top 12 senior student-athletes from across the state annually since 1983.

"That was a surreal moment for me," said Kahahawai, who was training with the U-21 National Team in Shreveport, Louisiana at the time of the announcement.

"I got the email when I was up there so I didn't know I was selected until my mom (Noe) called me that night," she added. "It's just such an honor to be a part of that special group of twelve."

Kahahawai made sure to express her appreciation for her mother, as well as her father, Mike, and younger brother, Cain.

"My parents have always emphasized the ‘student' before the ‘athlete,' which is huge for me," she said. "My mom pushes me in the classroom and then my dad is always taking me to practices and talking in the car rides – it's helped me tremendously throughout my career."

Established in 2013, the Distinguished Athlete Award, presented by Ala Moana Hotel by Mantra, annually honors the top male and female student-athlete in a single sport during the past year. For a list of past winners, click here.