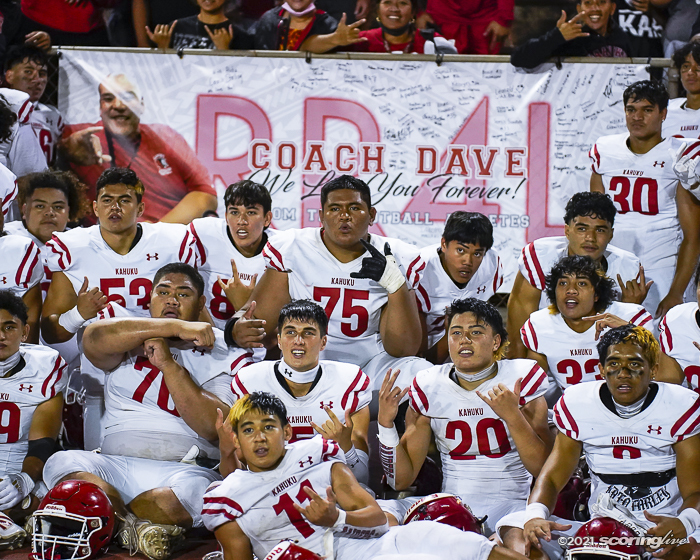 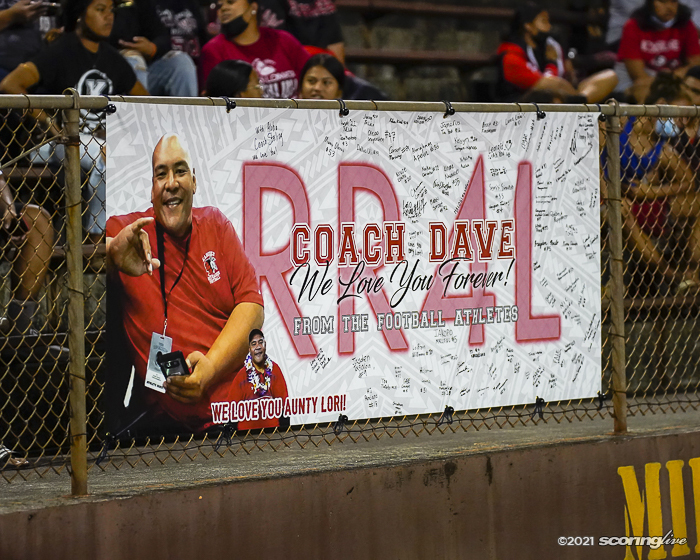 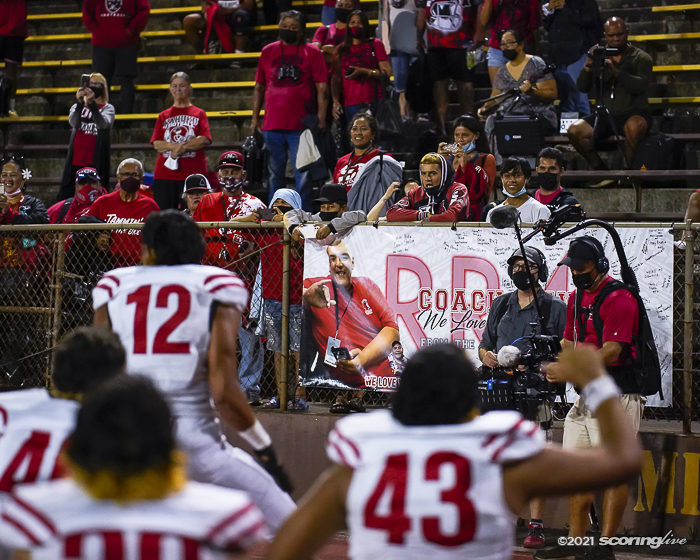 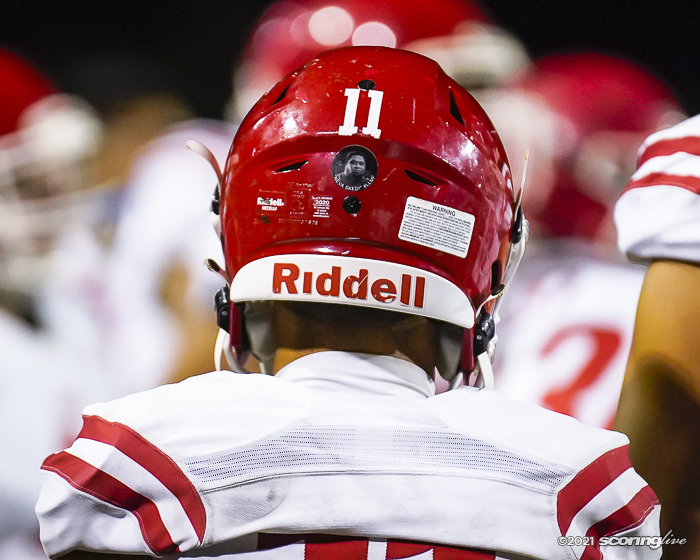 There was no disguising the motivation for the Kahuku football team Saturday night.

The Red Raiders wanted this one for coach Dave.

That would be David Vimahi, a longtime fixture within the program and a pillar in the Kahuku community. He passed away unexpectedly Wednesday morning.

Kahuku coach Sterling Carvalho informed his players of the tragic news that day.

"It was pretty rough when we found out the news," said junior wide receiver Kainoa Carvalho.

As he did for much of his life, however, Vimahi coached up his players until the very end.

"He left us with a message: ‘Just go one-and-oh each week,' " Kainoa Carvalho said. "We wanted to play this game for him and we went one-and-oh for him, so rest in love, coach Dave."

During the warm-ups leading up to kickoff against fellow-unbeaten Mililani Saturday, the Red Raiders collectively knelt in prayer, surely with coach Dave in their thoughts. After the game's final whistle, they gathered for a team photo around a large banner of Vimahi that was hung along the fence behind the visitor's sideline at John Kauinana Stadium

In between those events, they put on yet another impressive performance with a 55-20 win over the Trojans.

"This was for coach David," said quarterback Waika Crawford, "and this was a good team win."

Indeed it was and Crawford played a large role in it.

The junior came on in relief of starter Jason Mariteragi, who sustained an injury after a late hit by a Mililani defender that drew a penalty for roughing the passer. Mariteragi left the game with just under five minutes remaining in the first half and did not return.

After the personal foul kept the Kahuku drive alive, Crawford entered the game in place of Mariteragi and made an instant impact with his 13-yard touchdown pass to a wide-open Liona Lefau, who was left unaccounted for by the Trojans in the right side of the end zone.

Kahuku's next drive began at its own 45-yard line. A false start prior to the first play made it first-and-15. Crawford was sacked for a 5-yard loss on first down to make it second-and-20, but a delay-of-game penalty backed up Big Red to their own 30. That's when Crawford unleashed a deep pass down the right sideline that was on target to Carvalho, who fended off a pair of defensive backs on his way to a 70-yard touchdown.

"He came off the bench and he played lights out," Carvalho said of Crawford. "He put us in a position to catch the ball, we all executed and we did good."

Crawford's second full series began with plus field position once again. On first-and-10 from the Mililani 44, Crawford connected with Lefau for a 19-yard pick-up to move the chains. He was sacked, however, on the next play for a 10-yard loss. Lefau hauled in a 6-yard completion from Crawford on second down before a pass interference penalty on Mililani extended the drive after Crawford's pass for Lefau on third-and-14 fell incomplete.

He missed on his next two throws, but another penalty for defensive pass interference on the latter set-up second-and-2 from inside the 10 and Crawford made the Trojans pay with his 7-yard scoring strike to Kruze Keanu, who made a diving catch near the back right pylon.

That sent Kahuku into the intermission with a 27-13 lead, at which point Crawford was 5-of-6 passing for 115 yards with three TDs. This, despite the fact that he had appeared in three games prior to Saturday, but had only attempted eight passes (and completed five of them) for 30 yards with one touchdown and an interception.

Crawford said that it was a matter of preparation.

"I knew that I always had to be ready just if my number was ever called and tonight my number was called, so I was confident in my game and I knew I had to step up because this is a big game," said the 6-foot-1, 175-pound Crawford.

"So I just stepped up, did my thing and the team did their thing and it was just an overall good team win."

Crawford led the Red Raiders to four more scoring drives after halftime, including a couple that culminated with his fourth and fifth TD passes of the night. He re-connected with Carvalho for a 16-yard score on a third-and-7 with 8:21 left in the fourth quarter. In the closing minutes, Crawford recycled the defense's third interception — and Brock Fonoimoana's second of the game — into a 20-yard TD pass to Jamerus Tai Hook.

Crawford finished 11-of-16 passing for 174 yards and five touchdowns through the air, while Mariteragi was 9 of 14 for 123 yards; neither quarterback threw an interception Saturday.

Sterling Carvalho, who coaches the quarterbacks himself, wasn't surprised one bit by the performance of Crawford, who goes by the nickname, Toa.

"And that's the thing, we know we had two great quarterbacks," said the fourth-year coach of the Red Raiders. "That's a luxury we have and so we're grateful for Toa getting all the reps he needed and we didn't miss a beat as soon as he came in; the game plan still stayed the same."

At the end of the night Carvalho and the Red Raiders rested easy, knowing that they fulfilled Vimahi's wish.

Kahuku improved to 5-0 with the win Saturday and on Monday overtook Saint Louis for the top spot in the ScoringLive/Hawaiian Electric Power Rankings.

The Red Raiders have a bye this week before they close out the regular season at No. 4 Campbell on Nov. 27.

The sophomore quarterback threw for 234 yards and seven touchdowns on a perfect 16-for-16 passing in...