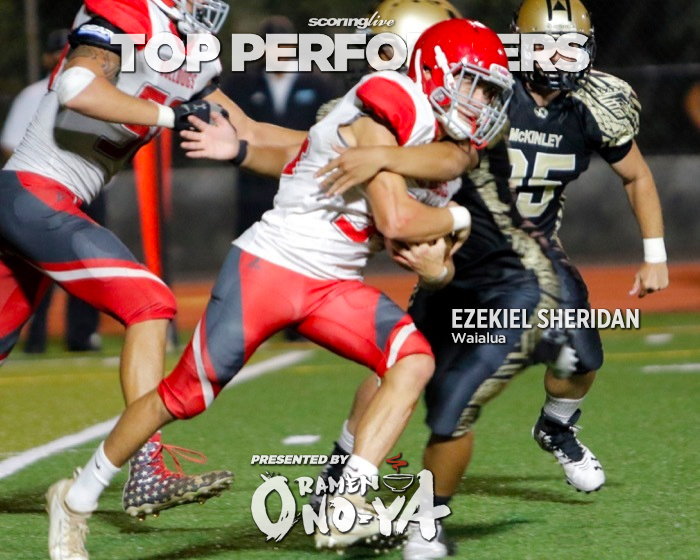 First-year Waialua football coach Gary Wirtz certainly wasn't surprised by the night that Ezekiel Sheridan had in Saturday's season-opening win over McKinley, but he was definitely impressed nonetheless.

As a sophomore in 2019 — when Wirtz was an assistant on former coach Lincoln Barit's staff — Sheridan played defensive end. He displayed some of that toughness Saturday night, particularly on his team's final offensive possession, when he chipped away at the Tigers' defense with run after run to help set-up the eventual game-winning 26-yard field goal by teammate Lasse Stolten with 1:25 left to play.

"I would say what impressed me most was in the fourth quarter, after playing the whole game, the way that he just kept going — he was like Ezekiel Elliott," Wirtz said, drawing a comparison to the Dallas Cowboys running back. "We just keep feeding him and just keep feeding him."

Sheridan's versatility and athleticism has allowed him to thrive in the defensive secondary this fall.

"It's totally different to him," Wirtz said of the free safety position. "He's definitely learning, but he's learning quick because of his speed and his toughness. He's learning the position and that's going to be an ongoing process, but every time he steps on the field he just gets better and better."

Sheridan's interception, which was the lone McKinley turnover of the game, came in the opening quarter. In between his time on offense and defense, Sheridan also serves as the team's punter. He shared the place-kicking duties with his younger brother, Elisha, until Stolten joined the team a few weeks back.

"He is a true ironman. If he took his shirt off and stood in front of you, you would be jealous, like, ‘why couldn't I look like that?' He looks like a Greek god, just missing the lightning bolt," Wirtz laughed.

Wirtz credits Sheridan's parents and the rest of his family for instilling an unwavering work ethic.

"He comes from a really good family. His two cousins are Waialua grads and he has an older brother and a younger brother and so with five boys total he's just grown up with that competitive spirit and is not used to losing. He's always just competing," Wirtz said.

The Columbus, Ohio-native and graduate of Ohio State University knew that he Sheridan would be among those he would have to rely upon during his transition from assistant to head coach.

"It's not like I'm being cocky, but I was just confident in him and his abilities and I know that he brings that 110 percent effort and intensity into every play," Wirtz explained. "He never takes a play off, so I knew having him on the field, he would bring that intensity and effort. He set-up us up for that field goal (Saturday), which, in turn, I could have set that up for him to have that kick, really."

For as much as Sheridan does on the field, he mostly has nothing to say about it.

"He's one of those leaders that he's not a talker — he's a ‘follow me-type,' not a ‘do what I say,' he's a ‘do what I do' and he does it, and if somebody's getting yelled at for not doing what he's supposed to be doing, he's the first one to step up and say, ‘I'm ready, let me do it,' " Wirtz said. "He's a leader by example. He doesn't shy away and he is one of our team captains."

Sheridan lost a fumble in the third quarter, but Wirtz felt it was a missed call by the officiating crew. Regardless, Sheridan eventually accounted for the turnover with his tough running in the game's final minutes.

"They called it a fumble. I think he was down, personally," Wirtz said. "Both knees were down when it was stripped out, but come fourth quarter, if it wasn't for him — he basically put the team on his back and carried us that 60 yards for the field goal — if it's not for his short-term memory and competitiveness where he won't let that (fumble) be the last thing he remembers about this game and just his mentality and that no-quit, go-go-go spirit, we don't win that game."

The Bulldogs got some help from their special teams unit late in the third quarter, when Elisha Sheridan scored on a 41-yard punt return to give his team its first lead at 12-7.

"I hate that I'm losing Zeke (after this season), that he lost out on his junior year and didn't have that opportunity to get three varsity letters in football, but I'm glad I have his younger brother for another year," Wirtz said of Elisha, a junior.

Ezekiel Sheridan is also on the canoe paddling and soccer teams at Waialua. Wirtz, a teacher at the school, said that the senior isn't really about recreational activities.

"He's a competitor, he just competes. I mean, if we were playing tic tac toe he would find some way to make it physical — loser has to do push-ups or something — he competes," Wirtz said. "He's made a lot of growth in his football knowledge, but because he's a natural athlete the kid could play any sport; He's just ready to go."

It was a productive first game at running back for Sheridan, as he averaged 5.4 yards per rush and accounted for 121 yards from scrimmage, or 57 percent of Waialua's total offense.

"It's his first time doing it, but it's like a fish to water — it's natural to him — he doesn't shy away from contact," Wirtz described. "He's a quick learner, but it's natural. For Zeke, bring physical is what he's good at, no matter what it is."

The win was a step in the right direction for a team with a new head coach for the first time in 18 years and also served as the first coaching victory for Wirtz.

"It was good for the team, good for the community. It felt good and we want to keep that going, that intensity, that effort and keep riding that as long as we can and hopefully just keep getting better," he said.

Sheridan and the Bulldogs next play Saturday, when they host Kaiser at Toshiyuki Nakasone Field. Kickoff is scheduled for 6:30 p.m.

Kealii Ah Yat, Kamehameha — Threw for 160 yards and three touchdowns on 14-of-21 passing with one interception in a win over Saint Louis

Leonard Ah You, Kahuku — Made six total tackles, including two sacks and scored on a 25-yard interception return for touchdown in a win over Kapolei

TJ Arakawa, Kealakehe — Ran 12 times for 136 yards and two touchdowns in a win over Kamehameha-Hawaii

Joshua Arcayena, PAC-5 — Made 10 total tackles, including one tackle for loss and scored on a 54-yard fumble return for touchdown in a loss to Saint Louis II

Jayce Bareng, Moanalua — Scored on a 60-yard punt return for touchdown in a win over Damien

Noah Bartley, Kamehameha — Ran 29 times for 203 yards and two touchdowns in a win over Saint Louis

Ryan Bethke, Kaiser — Had eight total tackles, including two for losses, and one sack in a win over Kalani

Kainoa Carvalho, Kahuku — Caught seven passes for 96 yards and two touchdowns and scored on a 92-yard kickoff return for touchdown in a win over Kapolei

Joab Cruz, McKinley — Caught 11 passes for 99 yards in a loss to Waialua

Trey Dacoscos, Pearl City — Threw for 301 yards and six touchdowns on 15-of-24 passing without an interception in a win over Kalaheo

Brennan Dupio, Kamehameha — Recorded a sack and recovered a fumble in a win over Saint Louis

Caleb Garcia, Kaiser — Made eight total tackles, including seven solo stops, one for loss and scored on a 59-yard interception return for touchdown in a win over Kalani

Jordan Hanano, Hawaii Prep — Scored on an interception return for touchdown in a win over Pahoa

Luke Hendricks, Hawaii Prep — Scored on an interception return for touchdown in a win over Pahoa

Blaze Holani, Saint Louis — Made seven total tackles and scored on a 41-yard interception return for touchdown in a loss to Kamehameha

Jakob Honda, Hawaii Prep — Ran for three touchdowns in a win over Pahoa

Kamaehu Kopa-Kaawalauole, Campbell — Caught three passes for 108 yards and a touchdown in a win over Farrington

Daymian Lapitan, PAC-5 — Made four total tackles, forced a fumble and recovered a fumble in a loss to Saint Louis II

Kamakana Mahiko, Kaiser — Recorded three interceptions, including one that he returned 66 yards for a touchdown, and caught another TD pass in a win over Kalani

Jordan Mariteragi, Kahuku — Threw for 199 yards and three touchdowns on 15-of-20 passing without an interception in a win over Kahuku

Kini McMillan, Mililani — Passed for 154 yards and three touchdowns on 13-of-22 passing without an interception in a win over Waianae

Makanalea Meyer, Mililani — Recorded a sack and scored on a 52-yard interception return for touchdown in a win over Waianae

Mason Muaau, Saint Louis — Caught three passes for 103 yards and a touchdown in a loss to Kamehameha

Sheynen Nahale, Kealakehe — Threw for 193 yards and a touchdown on 19-of-29 passing in a win over Kamehameha-Hawaii

Kana Nelson, Campbell — Had two sacks in a win over Farrington

Connor Payomo, Kapaa — Had a sack, recovered a fumble and scored on an interception return in a win over Waimea

Tysic Puni, Campbell — Recorded a sack and recovered a fumble in a win over Farrington

Raymond Roller, Mililani — Caught six passes for 91 yards and two touchdowns in a win over Waianae

Kamaehu Roman, Mililani — Had two sacks in a win over Waianae

Jaron-Keawe Sagapolutele, Saint Louis II — Threw for 309 yards and four touchdowns on 18-of-22 passing without an interception in a win over PAC-5

Joshua Sagapolutele, Saint Louis — Made two tackles, had one sack and recovered a fumble in a loss to Kamehameha

Elisha Sheridan, Waialua — Scored on a 41-yard punt return in a win over McKinley

Lasse Stolten, Waialua — Kicked a 36-yard field goal and a 26-yard, game-winning field goal in a win over McKinley

Seti Taualupe, Kalani — Had nine total tackles, including two for losses, in a loss to Kaiser

James Taufa, Kahuku — Made three total tackles, including one sack and scored on 15-yard interception return for touchdown in a win over Kahuku

Beneath Togafau, McKinley — Ran for two touchdowns in a loss to Waialua

Tre Walker, Hawaii Prep — Threw three touchdown passes and ran for another score in a win over Pahoa

Hailey Kauweloa, Nanakuli — Had 12 kills, 11 assists, seven digs, three aces and a block assist in a four-set loss to Leilehua

Haylee Lyons, Kalani — Had 18 kills, three aces and a block assist in a four-set win over Roosevelt

Melene Matautia, Nanakuli — Had 14 assists, 13 digs and six kills in a four-set loss to Leilehua