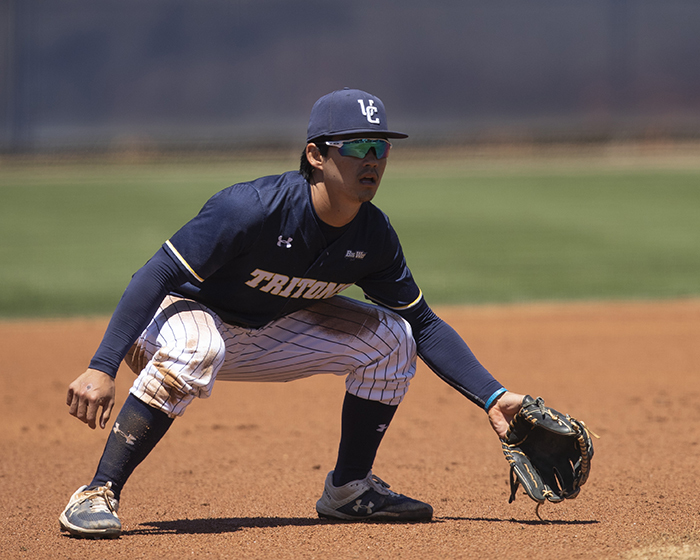 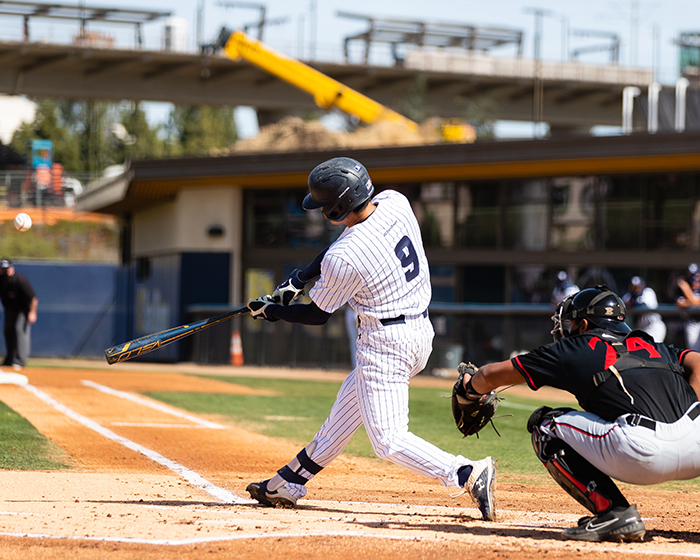 Although Everett Lau is a go-with-the-flow kind of guy, the events of the past 14 months have certainly taught him to appreciate what he has.

Not that he will need to be reminded of that this weekend.

Lau, a 2016 graduate of Iolani School, will enjoy a homecoming of sorts when he visits Les Murakami Stadium with the UC San Diego baseball team for a four-game series against the University of Hawaii Friday through Sunday.

It is the penultimate weekend of the season for the Tritons (18-26 overall, 15-17 conference), a first-year member of the Big West. For Lau, however, it will be the second-to-last weekend of his baseball career, one that has included several stops since his prep days. 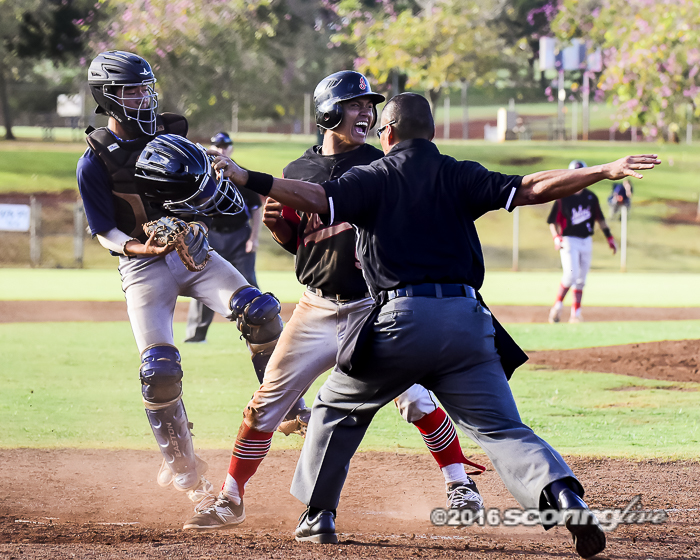 After a senior season that saw Lau earn first team All-ILH and All-Hawaii honors with a .462 batting average, he was a two-time Golden Gate League First Team All-Conference selection at the College of San Mateo.

"I went the (junior college) route and you just bust your butt, work hard and you play, but at the same time you're still working for something else on top of that, to transfer out," said the 5-foot-9, 185-pound Lau.

Following his two-year JuCo stint, Lau transferred to Auburn, where he played in 19 games, including eight starts and was named to the Southeastern Conference First-Year Academic Honor Roll.

In Lau's only season with the team, the Tigers made a historic postseason run that culminated with the first College World Series appearance in program history.

"That was a great experience and one that if every college baseball could experience, I think that's something that they would strive to be a part of and just the whole journey of it," he said.

Fitting way to finish off the home slate.

But Lau felt that he had more to offer than the limited opportunities he was afforded at Auburn, where he hit .250 (10 for 40) with eight RBI and seven runs scored.

"You work so hard going through a JuCo and you kind of put all the marbles in and go big or go home, I guess," Lau said.

And so Lau departed the Tigers' program for a fresh start on the west coast, with a program in UCSD that was in its final season of Division II — for what he thought was his final season of baseball.

"It was definitely a great experience all-around at Auburn and then going to another program where you have a shot to play for a D2 national program — because UC San Diego was good — so both pretty good, solid programs that were awesome to be a part of and I think that's what made the journey even more special is that I would say I have no regrets about it, which is definitely cool," Lau expressed.

"Senior year was cut short last year so can't really take anything for granted in that perspective, just try to keep a positive mindset about it and just be grateful for everything. Last year was abrupt for all the seniors, so just the gratitude that comes along the way that I've learned over the year," Lau said.

While the pandemic closed the door on the 2020 season, it opened the door for Lau to return for a fifth year this spring — the Tritons' first year in their NCAA-mandated four-year reclassification period to Division I.

"Going to JuCo and especially coming from Iolani, I kind of just put the faith in there and definitely had good support throughout the way and then it kind of just circles back going out to Auburn and then UCSD welcoming me for what was supposed to be my last year — and their last year of D2 baseball — which is kind of cool and now getting this experience to play in the Big West," Lau reflected.

Lau opened the 2021 season with a solid weekend against San Diego State at the end of February. He had a pair of two-hit games, including a home run, double, walk and four RBI in a 9-3 UCSD win over the Aztecs on Feb. 27.

A hamstring injury, however, forced Lau to miss all of March. After losing out on a dozen games while on the mend, he homered in his return against Long Beach State on Apr. 1.

"Just keep working hard, take value of that time you have and you never know what happens," Lau stated. "My experience could happen to anybody. It's just kind of cool how it worked out and you just kind of keep working at it and see where it takes you."

There have been growing pains for UCSD this year, to be sure. It won just one of its first nine games to open the season and dropped 12 of 15 during one stretch.

"It's just a grind to keep going at it every day with four-game series and no mid-week (games) and so it's hard to kind of let up, in that sense," Lau said.

But the Tritons have turned things around as of late. They have won six of their last seven games and are coming off of series wins over Cal State Fullerton and UC Davis.

"I would say we definitely got better as the season went on, but we've got two weeks left so we'll just kind of play it out and see what happens," said Lau, who batted 3 for 4 in Sunday's 6-4 win over the Aggies.

"To be honest, I didn't even know we're tied. I don't pay much attention to that, but I do think it's pretty cool," Lau admitted. "It's another weekend to go out there and try to play baseball. It'll be an environment change going back home, but for the most part it's just going out there and playing baseball."

Lau will see his share of familiar faces in the Rainbow Warrior dugout, including a quartet of fellow Iolani graduates in infielders Matt Campos (2016 alum) and Aaron Ujimori (2019), catcher Blake Hiraki (2019) and pitcher Trevor Ichimura (2018).

"I think it's definitely cool to see them four, five years down the line — when Aaron was a freshman, playing next to Campos senior year — and just seeing this whole circle of baseball still going, it's kind of a cool experience, so that will be awesome," Lau said.

Lau and Campos are high school classmates and made up the left side of the Iolani infield as seniors; Lau manned the hot corner, while Campos patrolled shortstop.

"He's a good friend of mine," Lau said of Campos, who played two seasons at the University of San Francisco before transferring to UH in 2019.

UCSD will arrive in Honolulu on Thursday and get a practice in at Les Murakami Stadium that night. It will mark Lau's first time back on the turf in Manoa since his senior year of high school.

"I don't think it's even set in yet. I've only played a couple of games there — maybe two or three? I mean, I've attended more Hawaii games as a kid so it's kind of crazy to actually play in it, but yeah, I don't know, I think I just have to wait until the first pitch and see (how I feel). We get out on Thursday to practice and so we'll see how that goes, but Friday night, six o'lock, for sure that will be something to remember moving forward," Lau pondered.

Lau hopes that it will be a weekend that he can share with his family — dad, Robert, mom, Emelene and older brother, Emerson — included amongst a limited crowd allowed inside of Murakami Stadium for the four-game set.

"Coming back to play at home will definitely be a cool experience, so it's definitely been a journey and hopefully mom, dad and brother can attend," Lau said. "I've definitely had a good support group that got me along in this journey and Emerson would definitely be the main one, so that would be cool that it all circles back if they let fans in."

Lau graduated back in December and hopes to be in law school next year, when his baseball-playing days are through.

"That would be ideal, head down and try to do law school," he said. "Other than that, I wouldn't be able to tell you what I'm going to be doing — that's a really good question I have to figure out — but definitely more school and go from there and see where it takes me. For now I'm just trying to enjoy the last two weeks."

Lau also lettered four years in bowling at Iolani, which he credits Emerson for getting him into. He reflected upon his time as a student-athlete in both high school and college as a time of growth — on and off of the field.

"I think the whole thing about being a student-athlete, especially at the college level, is being disciplined and staying on top of things," Lau said. "Being on my own and being a student-athlete, I'm really in charge of my own life and try to make my own decisions and it's just kind of that whole growing thing and being in different places — down in Auburn, down at San Diego, JuCo — it all helps you grow as a person, as a character, and that's what I found pretty cool about this whole journey also."

The Tritons and ‘Bows open their series Friday night. First pitch is scheduled for 6:35 p.m. They will play a doubleheader Saturday, beginning at 1:05 p.m. and wrap-up the weekend with a single game Sunday at 1:05 p.m.

All four games will be televised by Spectrum Sports and broadcasted on radio by ESPN Honolulu.

Attendance is limited to family and friends of student-athletes only, as allowed by NCAA rules. No tickets will be sold for these games.

Not long after the Spartans hoisted the state championship trophy last Thursday, they were quick to acknowledge...

Savanna Simons swatted a two-run home run that was part of a three-run top of the first inning for the...

Raiders seeking repeat after fending off Trojans in semis

The Spartans scored in six different innings and got 12 hits, including two home runs, to stun OIA champion...