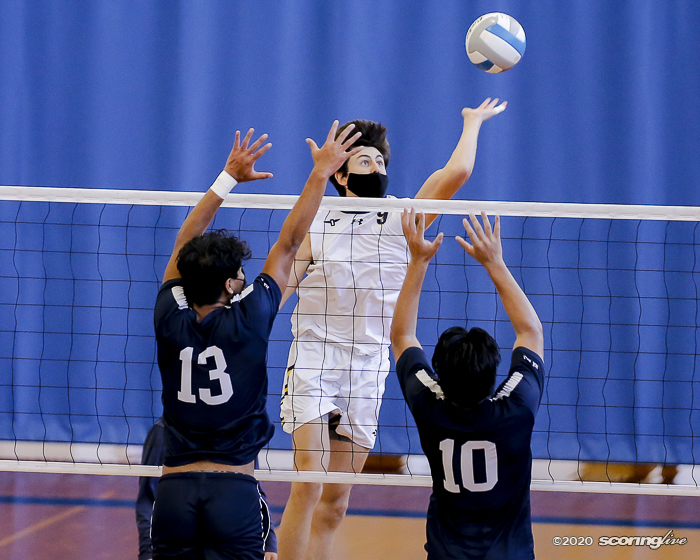 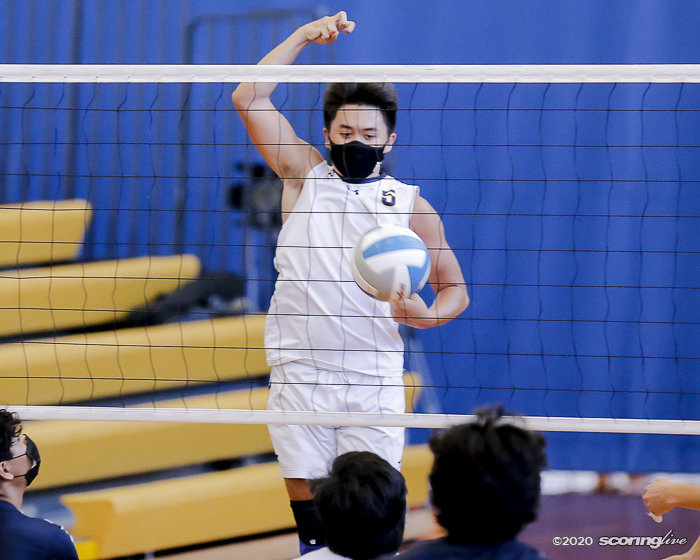 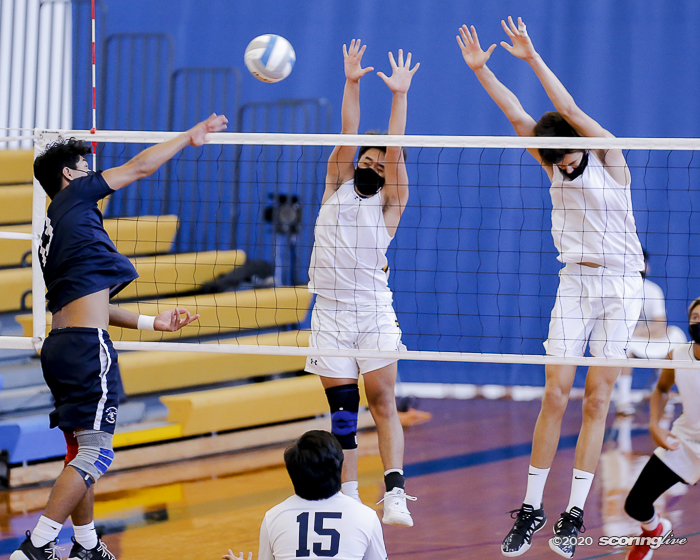 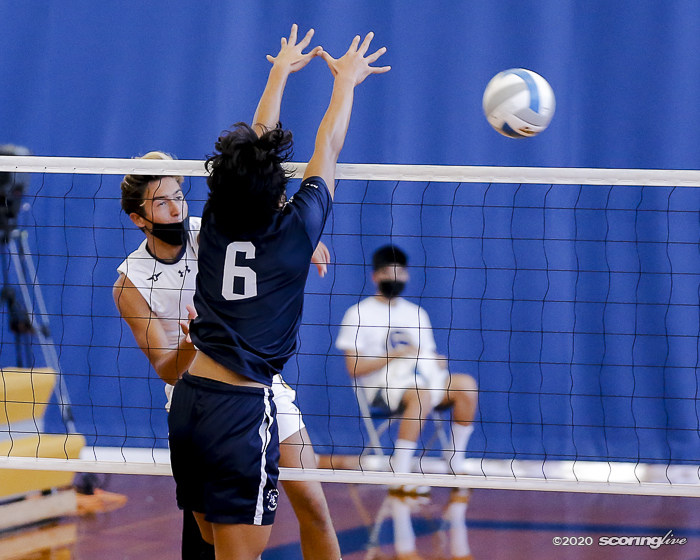 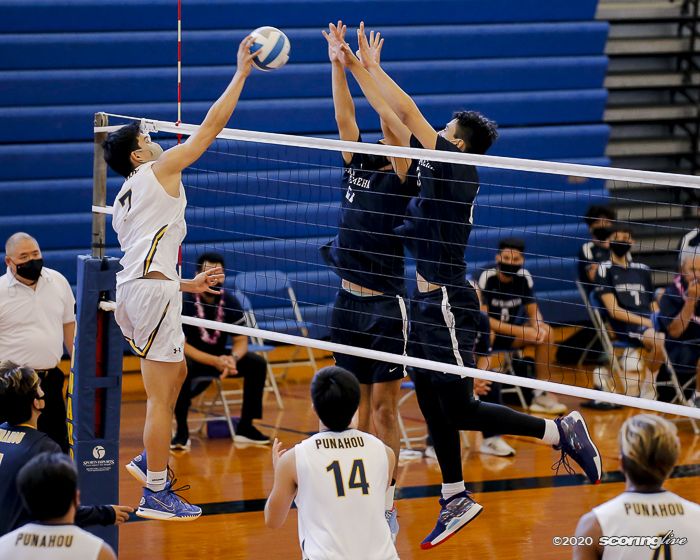 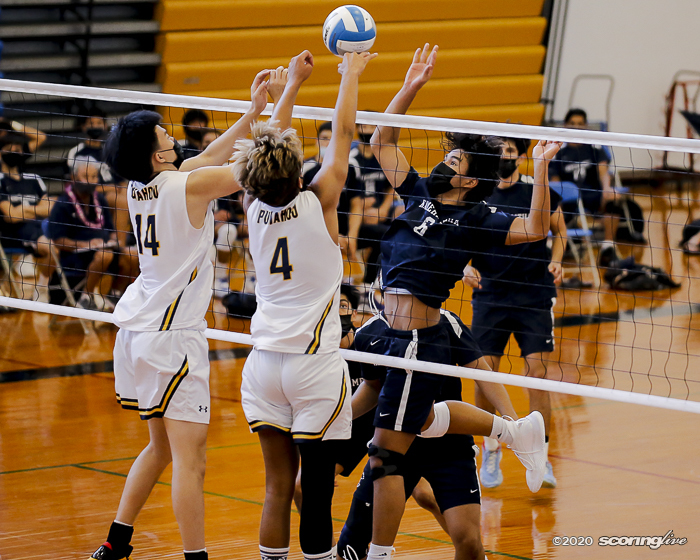 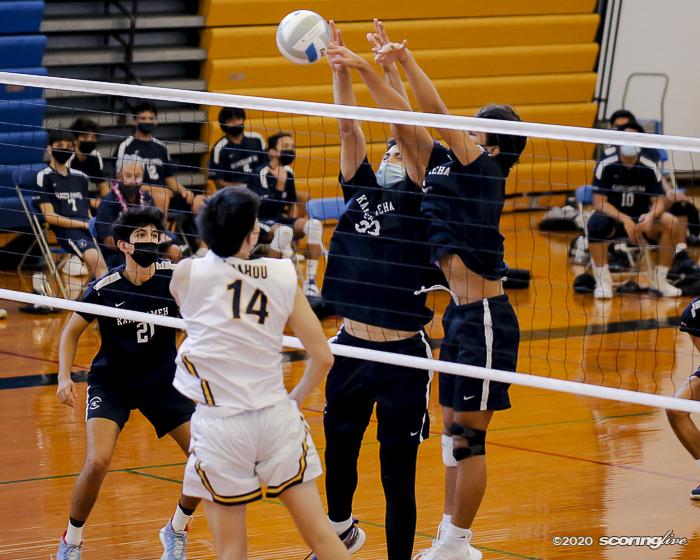 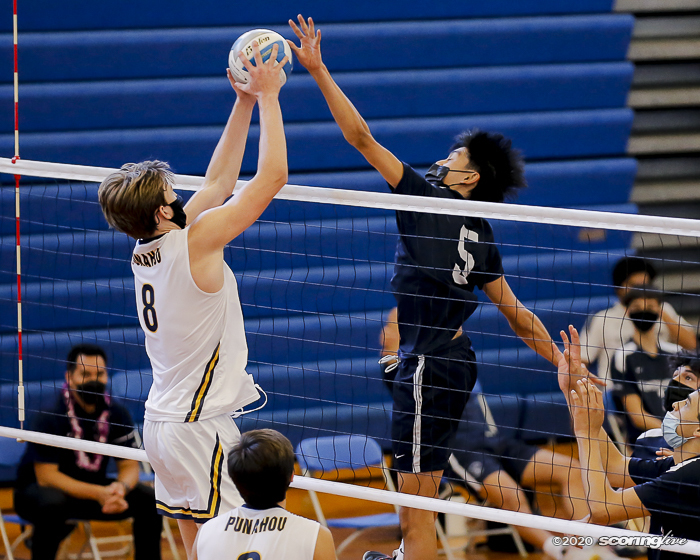 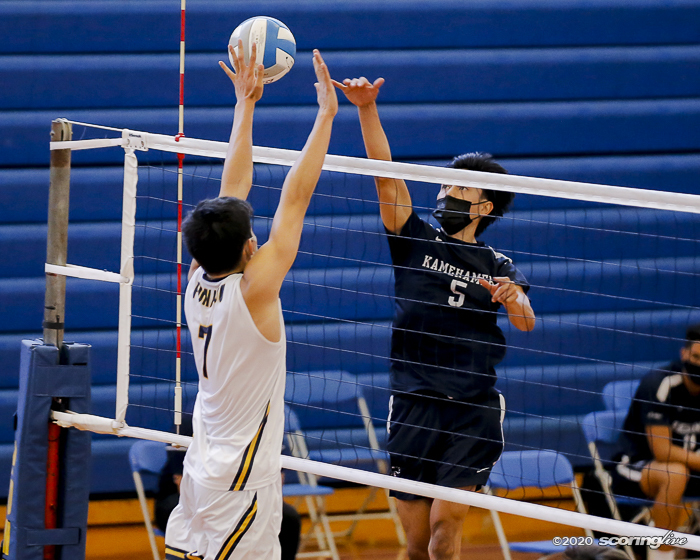 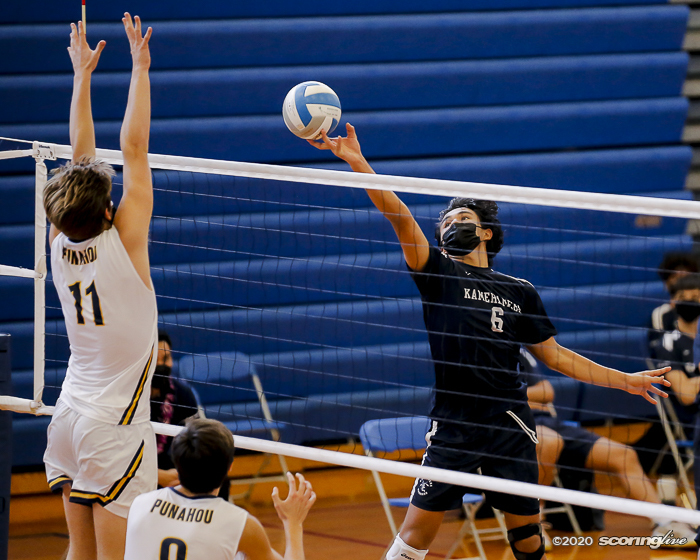 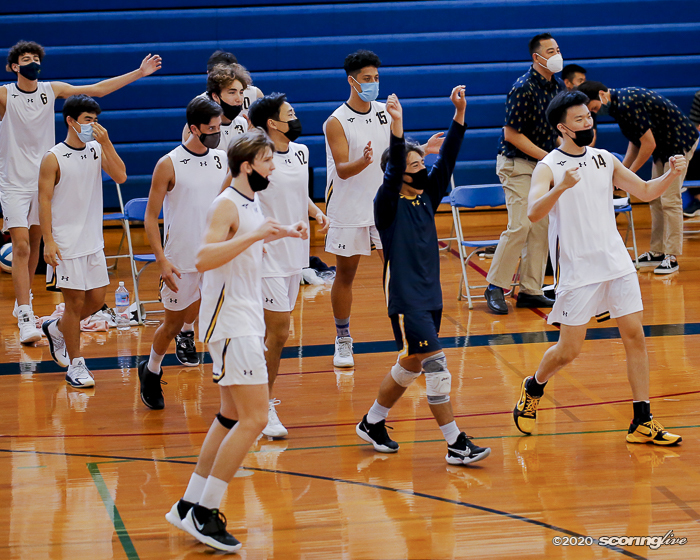 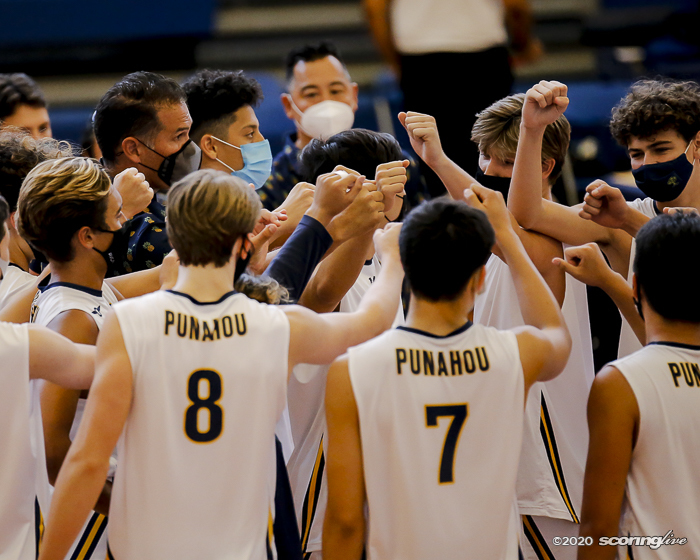 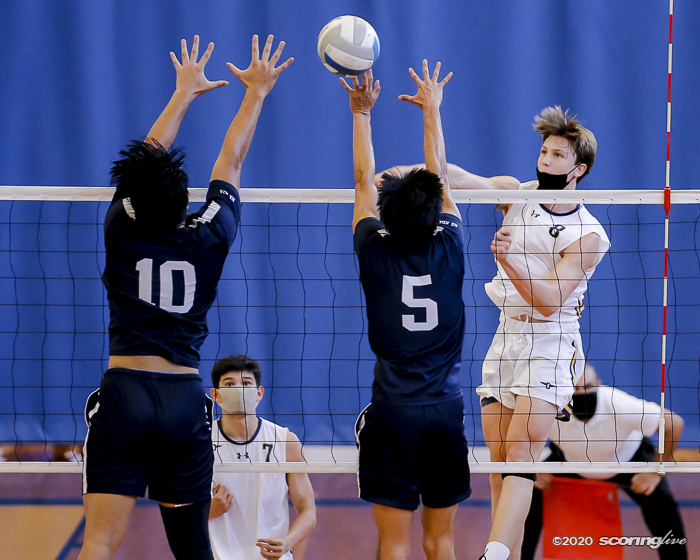 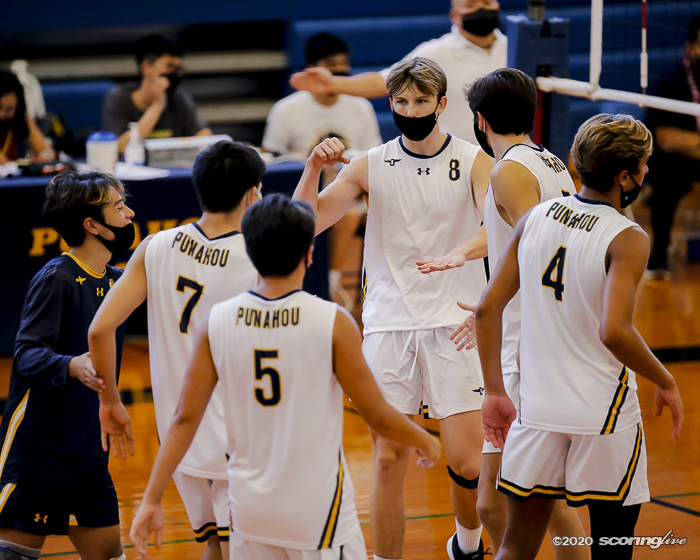 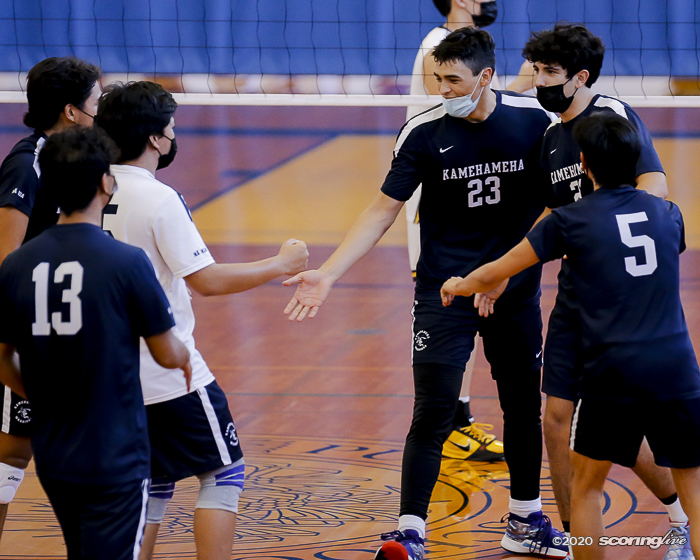 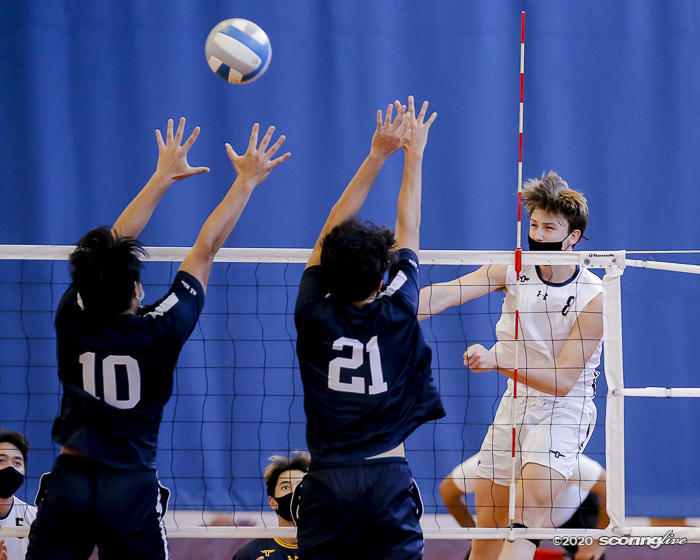 MAKIKI — While the past year has brought about its share of uncertainty, some things, it seems, never change.

The Buffanblu capped off an undefeated Interscholastic League of Honolulu season Tuesday with a two-set sweep of visiting Kamehameha, 25-17 and 25-11, in the Division I championship match at Christopher B. Hemmeter Fieldhouse.

Three different players recorded at least five kills to lead a balanced effort for Punahou (12-0), which has won 10 of the last 11 D1 state crowns, including each year it has been contested since 2012.

While there will be no state tournament this spring for Rick Tune's squad to try and make it nine straight titles, the longtime Buffanblu coach was grateful, more than anything else, that his team was able to complete a season in a pandemic — ILH championship aside.

After all, the memory of a somewhat-impromptu senior night on March 12, 2020 — which did, in fact, prove to be his team's final game of last season — still resonates with Tune.

"I don't know, I feel like I can't speak for the whole group, but my sense is that we're feeling relief, feeling relief and gratitude that we even had a season, feeling relief that we were able to play all of the matches that were scheduled," Tune expressed minutes after the final point of Tuesday's win, his team's third over Kamehameha (6-4) this year.

"I mean, a couple teams during the year lost matches because of COVID protocols, so I mean, I think the prevailing feeling over the last year is just unpredictability, so with the season now in the books we can kind of exhale a little bit," he added.

Opponents weren't provided much breathing room by Punahou, which dropped just one set all spring. That came in the very first match of this truncated schedule: March 20th at Mid-Pacific.

Since then the senior season for five Buffanblu — including Nate Loose and Noa Haine — has come and gone.

Both players played their final match for Punahou Tuesday.

"Gotta make it count when you can," said Haine, a reserve setter.

Loose said that the players ultimately decided to make the best of what they were given this season, instead of lament what could have been.

"We got to prepare all season for this moment and we really came out to shine tonight and came out to play our best game," said Loose, a middle blocker and opposite. "It's just awesome knowing that there was just a finality to it all, really a great feeling."

Keau Tavares-Thompson had seven kills, Loose tallied six and Riley Haine added five for the Buffanblu, who amassed 7.5 team blocks to just two for the Warriors.

"It's always a good time, you really can't beat it, especially because it was our last ILH game, I figured might as well enjoy it, make the most," Loose said.

In the opening set, Loose's first kill of the night capped a string of four straight points for Punahou after the score was tied at 4 early on. A few points later, he teamed with Au Yuen on a block to give their team a 12-5 lead. Loose's lone service ace of the match made it 14-6 and forced Kamehameha to burn its second timeout.

The Buffanblu led, 17-7, by the time they completed their 13-3 run. The Warriors pulled to within 18-13 after Cruse Aea muscled a kill from the left side through a triple block to culminate a 6-1 run, but never got closer.

Loose finished off game one with an assist from Noa Haine. The 6-foot-7 Loose went off of a double-block and out with his attack to give Punahou game one, 25-17.

While Aea racked up a half-dozen kills after the first set, he was held to just one more the rest of the way. It was that kind of a night for Kamehameha, which led early in game two, but eventually faded.

Following a Buffanblu net violation and an ace by Kamehameha's Austin Sanchez within the first few points of the second set, Tune took an early timeout with his team trailing 3-1.

"He just said that (the Warriors) came out a lot harder in the second set," Haine said of Tune. "I mean, a lot of teams do, especially when you lose that first one and we just weren't as prepared in the very beginning for that set set, but I think we quickly changed gears once we realized that we gotta take care of what we need to."

Kamehameha's lead was 5-2 when Punahou made its charge. It was ignited by a violent kill from Tavares-Thompson on a seam-shot from the right side. An overpass by the Warriors on the ensuing Xander Pink serve gifted Loose with an easy kill. On the very next play, Loose teamed with Riley Haine on a double block to tie the score at 5. Punahou pulled ahead, 6-5, on a Kamehameha attack error and later extended it to an 11-7 lead on a triple block by Loose, Au Yuen and Aidan Tune.

"It just took a little bit to click back into that and eventually we figured it out and we started taking care of business," Loose said. "It was all just show from there. Just once we got rolling we just couldn't stop."

Rick Tune said that the quick timeout was meant to inject some energy into his players.

"They were flat. Honestly, we were warming up over there, they were super flat, they knew it, the second team was kicking their (butt) and we just needed to celebrate more and be in the moment," coach Tune said.

"I mean, they're playing for a championship match and you know, sometimes when you haven't had guys that have been in this particular environment — in an ILH championship match — they have all kinds of different emotional reactions and this group, having coached them for a long time, some of their emotional reactions can be a little bit passive and it just comes from their comfort with each other. It's not a bad thing, but sometimes they need to be reminded that they need to amp up a little bit," he explained.

It seemed to do the trick.

Aidan Tune's ace gave Punahou an 18-10 lead and led to Kamehameha calling its second timeout of the set.

The stoppage worked out for the Warriors as Tune's serve out of the timeout sailed long and out, but it was too little, too late. The Buffanblu closed out the match with a 7-0 run, including a trio of kills by Noa Haine — who had slid over from his setter position to outside hitter.

"I'm not much of an outside," he laughed. "That's all beach right there."

Rick Tune, for one, is not buying it.

"Noa's one of the better all-around players in the state and Noa can play a bunch of positions," Tune countered. "He can play outside, he can set, he can play opposite, you can probably put him at libero, honestly, we might even be able to throw him in the middle."

Haine, despite being in an understudy role to Au Yuen for the Punahou team, is signed to play collegiately at BYU next year.

"He's going to do that at the next level and he's a really good setter, but I think over the course of the year, Keegan was just a little bit ahead of him, but we felt like we had two Division-I setters on the roster, so it's just about acknowledging how good of a player Noa is and getting him some validation with that," Tune added. "And Noa is one of our hardest workers."

Haine's thunderous kills drew among the loudest cheers from the team bench all night. Loose was among those who gave him a rousing ovation.

"It's always fun getting a good kill because, I mean, I don't play middle either usually, so getting to play a different  position with a whole different group of guys for school season is really just, it's awesome and to make a huge play like that, it's just always so much fun," Loose said.

Haine put down back-to-back kills to set-up match point and a Kamehameha attack error closed it out for the Buffanblu, 25-11.

In comparison to last year's final match, Haine was appreciative of the moment, for sure.

"I mean, last year was kind of a mess of a season with COVID and everything just kind of starting up, but getting the chance and knowing we had a concrete season ahead of us and being able to prepare fully and as much as we could for our last game — it was just a different feeling going into the match and especially after coming out and winning this one," Haine expressed.

Aidan Tune finished with three kills, Au Yuen notched a couple of kills and four block assists and Ryder Hsiung chipped in with one kill and was in on two blocks in the win.

Three of Kamehameha's four losses this season were against Punahou.