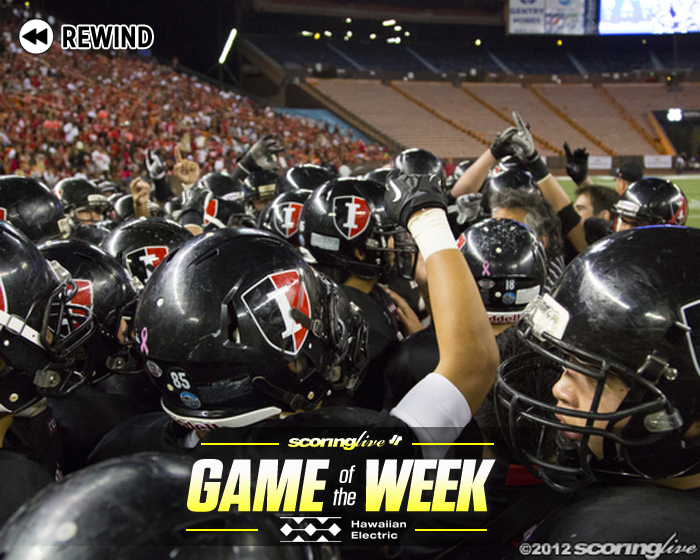 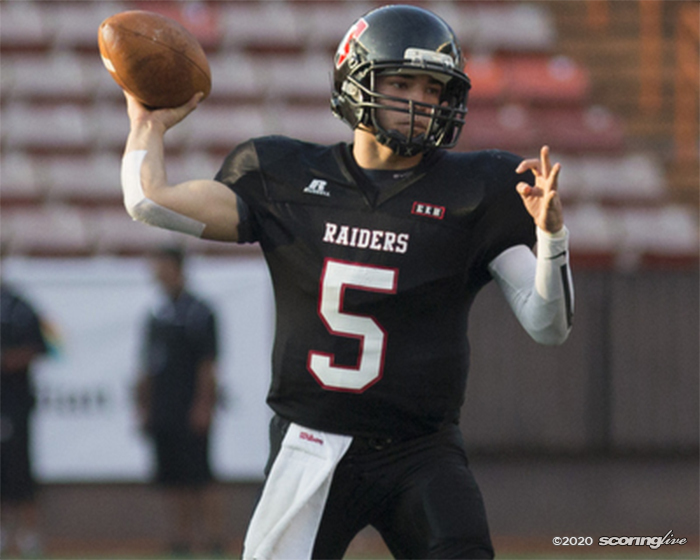 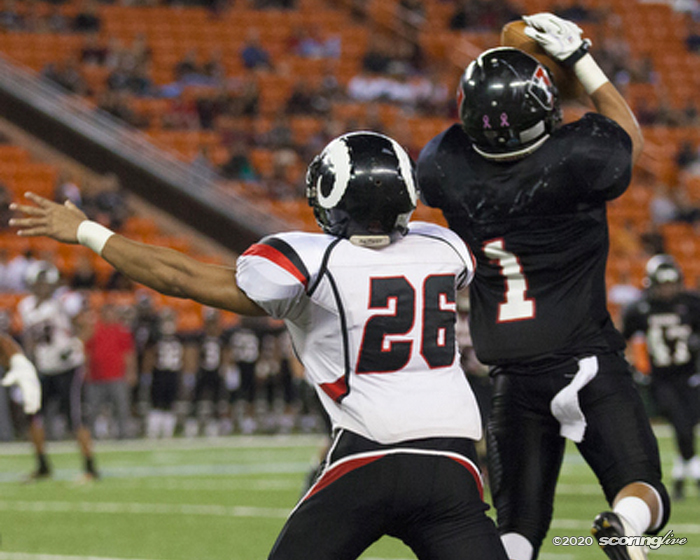 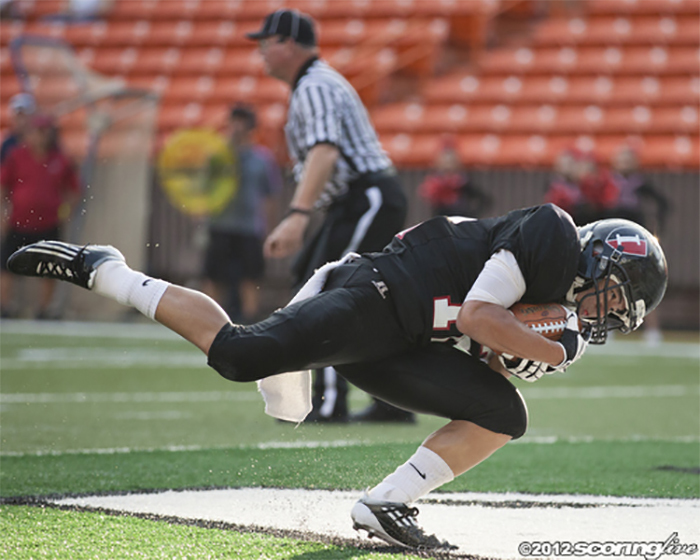 When the going got tough during the 2012 prep football season, the Raiders got going.

That would be the Iolani Raiders, who captured their sixth consecutive Division II state championship that year, which culminated with a 36-33 win over Lahainaluna in the title game.

In what was then his 22nd season as coach at his alma mater, Wendell Look's team finished with an overall record of 9-3. The Raiders posted come-from-behind wins in three early-season wins over Konawaena, Waipahu and PAC-5 and had to rally late to hold off the Lunas in the final game of the year.

"I think that kind of was the identity of this team," Look said. "That they always fought hard and never made things easy for themselves, but they always were able to pull through at the end."

Look elaborated on the importance of those tests his team faced in the first few weeks of the season — regardless of the fact that the contests against both Konawaena and Waipahu were non-league games.

"I mean, any time you have to work for wins and have that pressure and that mindset that every possession, every play is going to be a factor in the outcome, regardless if it's preseason or not, it's all practicing to be in that mindset, so yeah, each game was critical," Look explained.

He pointed to the 35-34 win at Waipahu in week 2, where his team had to score 21 fourth-quarter points to get past the then-D1 Marauders — and only after a successful two-point conversion following the tying score with 39 seconds left.

"I remember in our pre-game coaches meeting saying that if it came to that situation, that we would go for the win and practice that and hopefully down the road if we came across that situation again, these kids have already practiced it and so that was a good learning tool right there," Look said.

But the Raiders that year were already a senior-laden bunch, led by a three-year starter at quarterback in senior Reece Foy.

"He's just kind of a high-energy guy," Look said of the 5-foot-11, 173-pound Foy. "He's the guy that brought the juice, the energy every day and people fed off of that and he was able to back up that kind of juice with his play — I mean, he made plays. He made unreal plays."

Foy passed for 2,610 yards and 35 touchdowns that season on his way to Interscholastic League of Honolulu Offensive Player of Year honors. He completed 67.3 percent of his passes and was intercepted just six times on the year.

Iolani averaged nearly 35 points per game with its only losses coming against ILH D1 teams Saint Louis, Kamehameha and Punahou. Although his team gave up an average of 55 points in each of those contests, Look said it was about making the most of every opportunity.

"We look at it as, again, practicing to play against bigger and physical teams down the road and teams like Lahainaluna, so it was good preparation for us and that's how we looked at it," he said. "That's what we told the kids, that, ‘Hey, although we might not win this game, we want to know what it's like to play against bigger, more physical, more athletic teams and it's going to pay off for us down the road.' "

But with the veteran group that he had that year, Look knew that the ceiling was high. He just needed to make sure he got them there.

"I think scheme-wise we weren't going to change too much, but it's all the mindset of how they were going to come in now as a senior group and live up to the expectations and standards that have been set before them. They didn't want to be the team that broke the streak, so you have to find ways to motivate different teams and one of the motivations was that, I think they put some pressure on themselves to keep it going," Look explained.

As soon as the Raiders put the finishing touches on a 43-0 rout of Radford in the state semifinal round, Look got to work prepping his team for a highly-disciplined Lahainaluna team, which easily got past Nanakuli, 28-0, in the other semi.

The Lunas present a unique challenge to opposing defenses with their wing-T attack that utilizes lots of misdirection, a slew of ball carriers and just enough play-action passes to hurt teams over the top.

"We're always concerned with their offense because it's a very unique offense," Look said. "We don't see that a lot and so to prepare for it is tough to emulate that in practice and their versatility with all their offensive weapons, that was the scary part."

Look also noted that the Lunas were quite formidable defensively, led by future-Pac-12 Defensive Player of the Year, Hercules Mataafa.

"He was a beast. He was unstoppable," Look said of the future Washington State star and current member of the NFL's Minnesota Vikings.

"We always knew he was going to be good, but their defensive front, if I remember correctly, he was the smallest one — they had some big dudes up there and they were athletic, tough kids. So we were concerned if we could handle them up front and take care of the line of scrimmage," he said.

The Raiders held a 7-0 lead after the opening quarter. They recycled a JT Los Banos interception into a 26-yard touchdown pass from Foy to Tanner Nishioka four plays later and made it a 15-0 advantage after Max Look ran in the ensuing two-point conversion.

But the Lunas answered with touchdowns on back-to-back drives to pull within a point at 15-14 with 32 seconds left in the first half.

However, Iolani reclaimed the momentum going into the break when it drove 65 yards in just five plays, capped off by Foy's 2-yard TD pass to Chad Hanaoka with just three seconds on the clock.

The same pair hooked up at the 3:35 mark of the third quarter on an 18-yard scoring strike to give the Raiders a 29-20 advantage.

Lahainaluna cut into the lead with Tytus Lucas's 19-yard TD run late in the third quarter and pulled ahead with 7:21 to play on Kiko Kohler-Fonohema's TD run from two yards out. The PAT was no good, however, to keep the Lunas' lead at 33-29.

The teams exchanged punts on their next possessions before the Raiders got the ball back with four minutes to play at their own 44-yard line. Six plays into the drive, disaster nearly struck when Foy had his pass intercepted by Lahainaluna's Scott-Isaac Medeiros-Tangatailoa.

Look remembers the play all too well.

"Vividly," he remarked. "I remember thinking to myself, ‘Reece, why are you throwing this?,' because it was a scramble. He scrambled and was kind of trying to make a play and it was (second) down and he threw it and it got picked."

After the change of possession, however, Nishioka was keen enough to jar the ball loose from Medeiros-Tangatailoa's hands and offensive lineman Kamu Borden recovered the ball to give his team the ball back.

"We caught a break and I told Reece after the game, I said, ‘Reece, of all the things we didn't want your senior season to end like that and I think the football gods granted your wish, man, because we got lucky. That was totally luck,' and you can't fault the kid — that's what he's been doing for us or three years. He's like Brett Farve and made plays, so you can't fault the kid, but it would have been really sad and unfortunate if it had all ended that way," Look said.

But it was not to be.

On the very next play, Foy found Nishioka for a 26-yard touchdown pass.

"In my mind, I said, ‘Okay, screw this, we're not trying to run time off the clock, we're going for the score right now,' " Look recalled. "We called that play for Tanner and I told Reece, ‘Let's go, let's score.' And we almost left too much time on the clock."

That score, followed by Jordan Genovia's extra point, put Iolani ahead 36-33 with 1:53 left in the game.

Lahainaluna started its final drive from its own 30-yard line and ripped off gains of 27 and 16 yards on runs by Jeffrey Ancog and Lucas, respectively. It drove all the way to the Iolani 32-yard line, however, Filikitonga-Lukela's pass on second down was picked off by Los Banos, who recorded his third interception of the game with just 27 seconds to play.

"They were running it, running it, running it and I thought they would continue to run it, but it all comes down to the discipline that our defense showed and the poise," Look said. "You know, I think they were a little more poised than I was because I was getting a little worried that (the Lunas) were just gonna pound it and run it down our throats and win it at the end, but JT did his job. He did what he was supposed to do. He was supposed to play the pass and he did and when people do their jobs and have trust in each other, good things happen."

That discipline is a little harder to come by when Lahainaluna ran the ball on 53 of its 67 total plays. Furthermore, it averaged a gaudy 8.3 yards per rush and pounded out 441 rushing yards in all that day.

However, of the 14 times that Filikitonga-Lukela unleashed a pass, only five of them were completed.

"In years previous once they establish that run game, they would go to that play-action game, that roll-out game, so that has really hurt us before and was the emphasis that year when we played them, that everybody just had to do their job and not try to do too much. ‘Do you job first and then rally to the help,' because Lahainaluna is so disciplined in what they do offensively and once they establish something they have a curveball to come back and hurt you, so we didn't want that to happen again," Look said.

"This team went through a lot of things, not only on the field, but off the field. Kids have their ups and downs and their hurdles that they have to face and the make-up of this team and the resiliency that they showed was a testament to this senior group," Wendell Look said.

He added, "They really, I want to say ‘willed,' they willed this team to that championship and down the stretch, how they were able to win it, holding off Lahainaluna with that last-minute interception as they were driving, I think it was a very fitting way to end it."