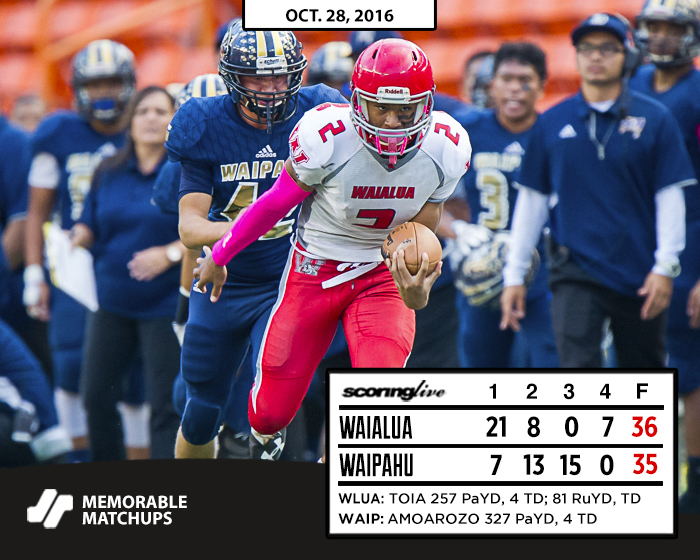 Quarterback Tevesi Toia had a hand in all of Waialua's scoring. He passed for 257 yards and four touchdowns and rushed for 81 yards and another TD for the No. 7 Bulldogs (7-2).

Waialua struck first when the Bulldogs moved 45 yards in seven plays with Toia scoring after rolling right and sprinting to the end zone make it 7-0.

Kymani Ayonon's interception return to the Marauders' 7 on Waipahu ensuing series set up Toia's 6-yd TD pass to Caleb Apau with 4:25 in the first period, but the PAT missed to keep it 13-0.

Waipahu, though, answered back on its next series with a 71-yard TD pass from Braden Amorozo to Isaac Yamashita on a slant to pull the Marauders to 13-7 with 2:59 in the first quarter.

Waialua reacted quickly, moving 80 yards in six plays with Toia's 14-yard TD pass to Lancen Kuni. Toia then hit Darin Valmoja-Khleang on a pass for the 2-point conversion to make it 20-7.

Waipahu started the second quarter with two TDs to pull to 21-20. Amorozo tossed a 25-yard TD pass to Cody Andres-Paguirigan before Centennial Kulikefu blocked a punt in the end zone that Jeremy Eda recovered for a TD to pull Waipahu to 21-20. But Matthan Hatchie squeezed his 6-foot-3, 250-pound body through Waipahu's line and blocked the PAT.

The Bulldogs added a score just before the half on Toia's 5-yard TD pass to Campbell with 1:22 left in the half to make it 29-20.

Waipahu erased a 29-20 halftime deficit with two quick TD passes by Amorozo, one from 30 yards out to Ezekiel Kapanui Reyes and the other a 55 yarder to Alika Ahsing, in the third period to put the Marauders up 35-29 entering the fourth quarter.

Waialua regained the lead with 11:34 left in the game on Toia's 8-yard TD pass to Risein Campbell. Dylan Hardin's PAT put the Bulldogs ahead by 1.

Interceptions by Julian Fely-Menor and Kuni denied the Marauders' next two series. Kuni also had a near pick on Waipahu's final series of the game.