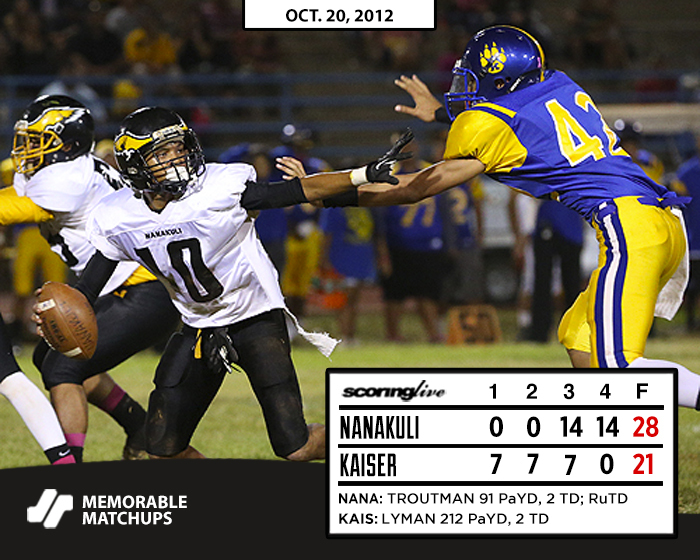 The Golden Hawks, posting a 4-29 record the past four seasons under coach John Lopes, rallied from a 21-point half-time deficit to stun Kaiser, 28-21, in an O'ahu Interscholastic Association White semifinal on Oct. 20, 2012.

The fourth-seed of the tournament will take on second-seeded Radford for the White championship Nov. 2 at Hawaiian Airlines Field at Aloha Stadium. Both teams have qualified for the Division II state tournament.

Trailing 21-20, quarterback Chazz Troutman's eight-yard touchdown pass to Joseph Shelton on a fade to the left side of the end zone with 27 seconds left and Troutman's 2-point conversion run capped 28 unanswered points by the Golden Hawks (6-3).

Kaiser won the coin toss and elected to receive. The Cougars were methodical in their 15-play, 80-yard drive that consumed 6:04 and ended with Lyman hitting Gonda on a swing pass for a 10-yard touchdown. Clapp's PAT gave Kaiser a 7-0 lead.

The Cougars' second score was set up when Shelton's punt was partially blocked and went for zero yards to the Nanakuli 39. The Cougars needed just five plays to score Lyman's eight-yard pass to Ikona Makaneole with 6:28 in the half to make it 14-0.

Kaiser appeared to still have control early in the third quarter. Nanakuli punted after its first series and Kaiser's 10-play, 69-yard drive ended with 6-2, 240-pound Fitou Fisiiahi scoring on a one-yard run with 5:52 on the clock to make it 21-0.

From there, Nanakuli began chipping away. Without Gonda, the Cougars had trouble sustaining drives. The Golden Hawks were able to string a nine-play, 61-yard scoring drive that ended with a 13-yard TD pass from Troutman to Lansen Liki with 14 seconds left in the third quarter to make it 21-14.

Kaiser's ensuing series was stopped when Jaryn Paris intercepted Makana Lyman's long pass and returned it to the Nanakuli 45. Nine plays later, Troutman sneaked in the from the 1 with 8:25 left in the game. But Shelton missed the PAT and Kaiser held a 21-20 lead.