Girls Volleyball
Crisostomo blazed her own path to UTEP 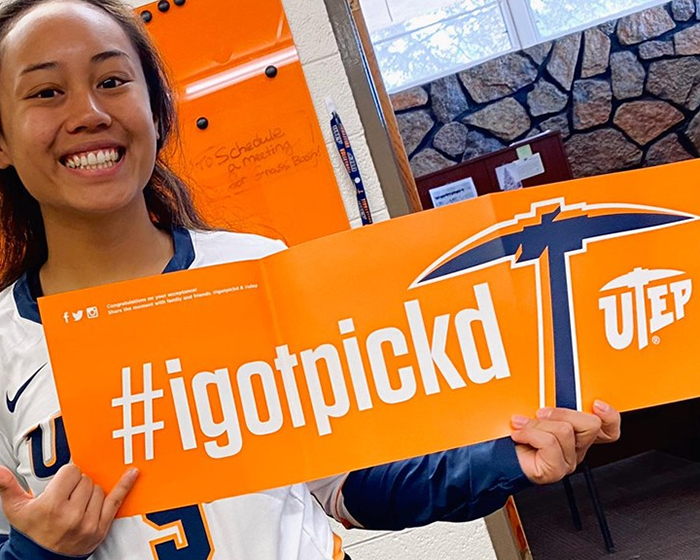 The two-time All-Hawaii volleyball selection has blazed a path all her own since graduating from Moanalua in the spring of 2018.

Her latest stop: West Texas. Specifically, the University of Texas at El Paso.

After two highly-successful seasons of junior college at the New Mexico Military Institute, Crisostomo, a junior libero/defensive specialist, has made an immediate impact on the court for the Miners.

Our floor general Ha'ahula CRIS-AWESOME-O has earned her teammates' trust quickly since arriving to the Sun City. The libero heads into play this weekend with 4️⃣2️⃣ digs over 9️⃣ sets ⭐️#HardHatHaven ✖️ #PicksUp ⛏ pic.twitter.com/Pl8upfobrR

Entering the weekend, UTEP had played two matches — both at Texas State — so far this season. Crisostomo recorded a match-high in digs both nights. She registered 20 digs in a five-set loss to the Bobcats on Sept. 11. In the rematch a day later, she posted 22 digs in a four-set Miners' victory.

Although the NCAA announced in September that its 2020 fall championships for seven sports would be moved to the spring of 2021 — including women's volleyball — UTEP is among 28 women's volleyball teams from seven varying conferences that have played at least one match to-date.

"First thing I can is that I'm just super grateful for the opportunity to play because I know a lot of teams in D1 and all of the NCAA aren't even practicing as a team, so I'm just super happy to be able to compete," said Crisostomo, who ranks 12th in Division I with 4.67 digs per set.

As a first-year player in the player, Crisostomo said that at first she hesitated to "come out of my shell and be the vocal person that I usually am," but that all changed after the first serve.

"When we played Texas State all the nerves went away and I think I kind of proved to myself and maybe others that I can lead the backcourt and control the backcourt," she said. "I have to talk with my hitters and tell them what I see on the other side of the net and give them feedback during the play and after the play, so it was hard for me at first, but now I'm getting used to it. Also, I had to get used to a new system — defensive system and offensive system — and coming from JC, going to D1, where the level of play is so much more competitive," Crisostomo explained.

The Miners were coming off of a 16-14 overall record a year ago, when they finished tied for seventh in the final Conference USA standings. Meanwhile, the Bobcats were tabbed to three-peat as Sun Belt Conference champions in a preseason coaches poll.

Furthermore, the loss to UTEP is Texas State's lone defeat this season and first home loss since Dec. 1, 2017. The Bobcats (8-1) are currently ranked 15th nationally in the AVCA Division I Coaches Poll.

"I think there's just this big drive for us to compete and win games. It's really funny because coach (Ben Wallis) talked about this today, that we are the underdog, but we're also expected to compete at a high level and beat top teams, because we know that we're capable of doing that," Crisostomo said. "When we beat Texas State, we came back (to practice) the very next day and we wanted it more."

Success has followed Crisostomo from Moanalua to El Paso, via Roswell, New Mexico. At each stop, she has shown progression. 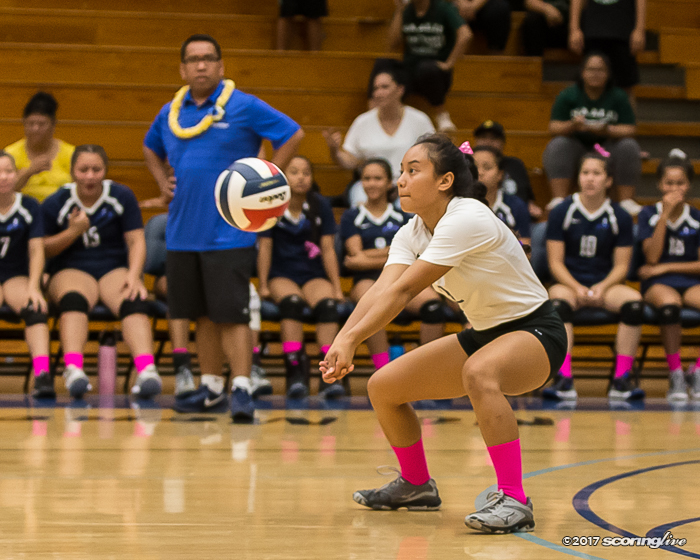 As a high school junior, Crisostomo earned All-Hawaii Second Team honors and helped Na Menehune to the OIA Division I title. The following season saw her earned First Team distinction as a senior.

"Honestly, I'm so grateful for all the coaches, all the teammates and the support system that I had through high school," said Crisostomo, who lettered in both volleyball and wrestling at Moanalua.

"I never thought I would go to college on a full ride and still be playing the sport I love for the next four years, so I'm really grateful for the entire high school opportunity, to be healthy and able to play sports and becoming the first person in my family to go to college on an athletic scholarship, that really proved something to myself, like finding my worth in sports and finding my sense of belonging being amongst teammates and being coached by amazing human beings who want me to be successful both on the court, on the mat and in life."

But as her prep career wound down and Crisostomo weighed her future options, she thought she'd try an unfamiliar path: Military school.

Crisostomo, who called Army-West Point was her dream school, credits Lee Lamb, her club coach with Ka Ulukoa, for sparking her interest during her sophomore year. It eventually led her to New Mexico Military Institute — arguably the second-most famous institution of Roswell.

"It's known for it's aliens, for sure," Crisostomo laughed.

She led the Lady Broncos in total digs in each of her two seasons there. As a freshman in 2018, Crisostomo earned All-Western Junior College Athletic Conference honors.

It was also during that season that Crisostomo made her first visit to El Paso.

"My freshman year, during the spring season, we played (at) UTEP and that's when I first saw coach Ben, but he wasn't recruiting me at the time," Crisostomo said.

Wallis was in his first season at UTEP after a successful run as an assistant at New Mexico State. He has a long-running friendship with longtime NMMI coach Shelby Forchtner.

"They're super close friends," Crisostomo noted. "I think it's really funny how they're best friends and I just switched schools and I now get to see my two favorite coaches in the world."

El Paso is located a little more than 200 miles southwest of Roswell — about three hours' drive.

"It's the same kind of atmosphere, same kind of weather: very dry heat and super hot," said Crisotomo, who led the NJCAA in digs and earned First Team All-American honors as a sophomore last year.

"Going to NMMI is probably one of the best things that's happened to me. When we came back from spring break and went into quarantine, not being able to go to back NMMI and be with my friends was heartbreaking for me because they were like my family there," Crisostomo said. "I met people from so many different cultural backgrounds and the relationships that I made there I hold so close to my heart and I'll never forget. I still talk to all the girls and I'm super close with the coaches that are at NMMI."

Crisostomo weighed a few other Division-I offers, but ultimately, a scholarship and the bond shared by Forchtner and Wallis that led her to UTEP.

"The people here and coach Ben and the rest of his staff made me feel more at home and the coaches are people that I really want to compete for, to play for. Some teams will have ‘off' days, (but) I don't want to have off days because I'm here to play for them. I want to show them the passion and love I have for volleyball," she said.

Of course, trying to do so in the midst of a pandemic has been interesting, to say the least.

"Over here we get screened by our athletic trainer every day. They'll test our oxygen levels and ask us if we have any symptoms of COVID and we have to wear a mask to enter any facility. We always use hand sanitizer before touching anything and when we do travel, we really try to keep our social distancing. Every week we have testing for COVID.," Crisostomo said.

She added that in the Texas State matches, the teams did not switch sides of the court between games.

"There was no high-fives like we would normally do, so it was kind of weird."

Crisotomo, who is majoring in psychology and minoring in criminal justice, is doing all of her classwork online, but noted that some of her teammates have in-person classes.

The threat of the coronavirus, however, was not enough to deter Crisostomo from competing this fall.

"I came here to play volleyball, I came here really for the coaching staff and when we first arrived on campus they really emphasized how important our safety was to them, so that made me feel comfortable and I know that if I do feel uneasy about them, I can tell them and they won't judge me for it," she said.

"We have a safe protocol for school and volleyball in place and there are strict guidelines and policies where we live, like we're not allowed to have guests, which it limits the amount of people you come in contact with, so I never thought about opting out; I came here to play and compete and get strong, build my body and build my volleyball IQ."

In a five-set win over North Texas Saturday morning, Crisostomo notched a match-high 20 digs. She registered a team-high 14 digs in a four-set loss to Stephen F. Austin later that day. Crisotomo also has four service aces on the season.

"We're still working hard and lifting to compete and train, but once next week comes around out season will shut down and we'll stop playing outside teams and instead really focus on getting stronger in the weight room and on our conditioning a lot, just trying to keep our bodies healthy and strong so when we roll into our actual season and come back in January, it's compete-mode all the way," Crisostomo said.

UTEP (2-2) plays North Texas again on Sunday, before wrapping up the fall season with a pair of exhibitions against Angelo State next Saturday.

"Again, we're super grateful to have these exhibitions matches because when we come back in the spring, when it's time to go, like actual season, we know what we do have to fix now and we're just going to grow and continue to get better as a team."