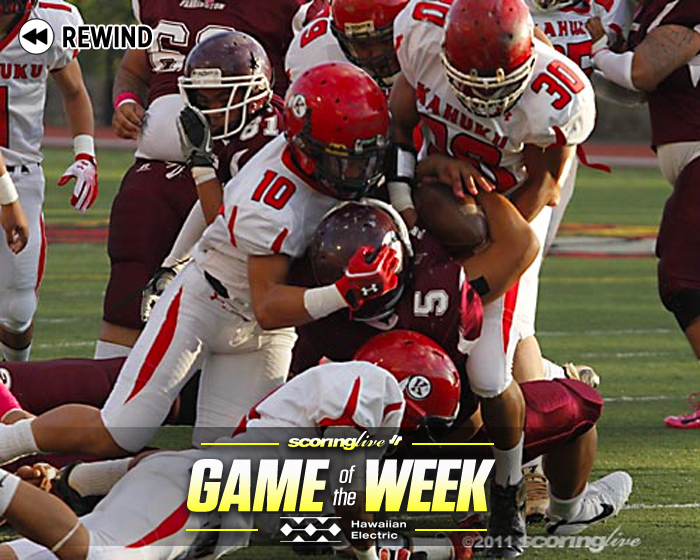 Coming off of the heartbreak and disappointment of a promising-turned devastating 2010 football season, the Kahuku Red Raiders had plenty to play for going into their 2011 campaign.

And that was evident with Big Red winning their first five games by an average of nearly 32 points per game — most of it without coach Reggie Torres.

Torres, who was in his sixth season at the helm of the Kahuku football program, was suspended just two weeks before the start of the season after failing to immediately inform the school administration about an incident involving a JV player bringing an illegal substance to team camp on campus.

He served what amounted to be a 33-day suspension and missed the Red Raiders' first three games of the season. This followed the abrupt end to their 2010 season that they experienced after self-reporting the use of an ineligible player that ultimately led to the forfeiture of six games.

"It was just a messed up situation, so coming into the (2011) season, it was kind of like a rebuilding season for us," Torres recalled. 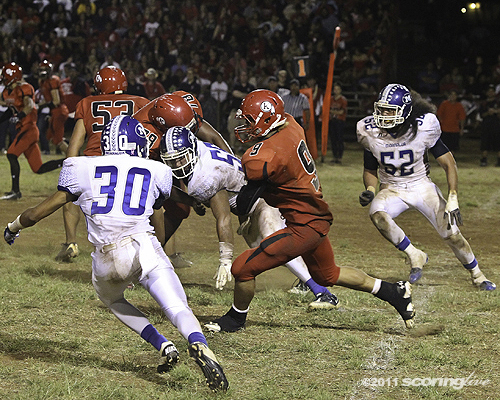 Kahuku eked out a 14-7 win over Moanalua to pick-up its third win since Torres returned to the team. The win helped the Red Raiders improved to 6-0 on the season and 4-0 in the OIA Red East going into their bye week, which was followed by a huge showdown against fellow-unbeaten Farrington.

Torres began to see complacency with his team, which was ranked atop the ScoringLive Power Rankings at the time; the Governors were ranked second.

"Our players were getting to the point where they thought they were good already," he noted.

The extra week of preparation ahead of the Farrington game came at an opportune time.

"When you play Farrington you know it's going to be a physical, tough battle and in those times we were kind of alike: both running programs — play-action pass, once in a while throw the ball, but we fed everything off of the run and so did they," Torres said.

"In the prior years to that we had a lot of close battles, so we knew going in that it was going to be a battle."

The game turned out to be a defensive struggle, with the teams combining for six turnovers — including three interceptions by the Govs' defense.

A takeaway by the Red Raiders resulted in the game's first score when defensive back Kawehena Johnson scored on a 92-yard interception return with just 58 seconds left in the first half.

Johnson's pick-6 gave Kahuku some momentum going into halftime, but with his offense limited to just 77 first-half yards, Torres knew the game was far from over.

"For me, any time we're leading it's something that we always gotta remind the kids, that it's still zero-zero and we cannot think we got the lead, but the sad thing about it is if you watched our second-half performance, it kind of looked like the kids thought we had the game, but honestly we struggled," Torres said.

Farrington tied it at 7-7 with 7:13 remaining in the third quarter on a short touchdown run by Tavale Masalosalo and took the lead one play into the fourth with Travis Tamapua's 28-yard TD pass to Toma Barrett, to pull ahead.

Kahuku pulled to within 14-13 on a 2-yard TD run by Johnson with 5:36 to play, but it failed to convert on the ensuing extra-point attempt due to a bad snap from center. It was in addition to a bad snap on a 32-yard field goal attempt late in the second quarter.

"I remember the missed PAT; it was kind of like somebody telling you that, ‘This is not your night.' You think you have a chance to tie the game and you miss it," Torres reminisced. "But the good thing for us — and we weren't gonna say it to the players as a staff — but it was a situation where if we could fix certain things, there's the possibility that we could beat them the next time, because this was a regular season game, so it was a lesson learned." 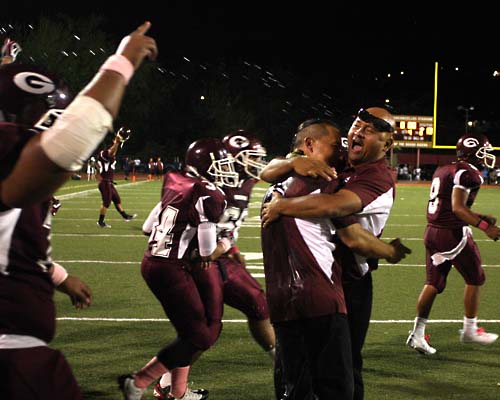 The one-point loss at the hands of the Govs gave Torres and the Red Raiders lots to work on going forward.

"It showed us that we're vulnerable and that anybody can be beaten, so when we went back to practice after the Farrington game, we could always go back to that game as a reminder and if practice was going bad, we'd stop and remind them straight up that, ‘We've already lost once and there's always the possibility that we can lose again,' " Torres said.

"We knew that if we didn't fix it then we couldn't go deep in the playoffs and we so we had improve our performance and our mentality. We had to get back to Earth, basically. But it was a good lesson for us because if a loss didn't happen then, it would have happened later and if it happened in the playoffs that would have been the ned of the season, so I firmly believe that loss got us back on track and helped us win that championship."

After the Farrington loss, Kahuku went on to win its final six games — including both the league and state Division I crowns — and finished with a record of 12-1.

Torres reaffirmed that none of it would have been possible without that slice of humble pie served by the Govs.

"It made us better as coaches because we felt that in those situations we weren't as prepared as we should have been, so what we did was spend more time on it and we were better for it. I mean, look at all our close games," he said, referencing come-from-behind playoff wins over Waianae (20-16) and Leilehua (13-10, OT).

And when Kahuku got its chance at redemption against Farrington, it took full advantage.

The Red Raiders pitched a 23-0 blanking of the Govs in the rematch, which also served as the OIA D1 title game.

"We felt better prepared and the things we did leading up to the game since that loss showed us getting better as a program," Torres said.

"The kids were a lot more composed and they worked their butts off, so again, that (first Farrington) game helped get us back on track as far as correcting ourselves in those situations and doing it right. We were able to build off of that and it was a reminder that, ‘Hey, if we can come back from this and win a championship, then that loss was worth it.' "

Kahuku capped off the year with a 30-24 win over Punahou for its first state championship in five seasons and its second of three total under Torres. 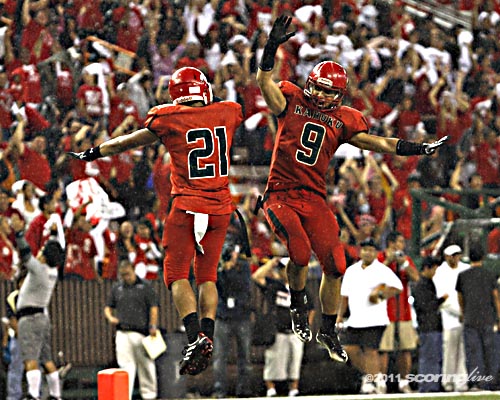 "It was a lot of adversity and for me it was a weight lifted off my shoulders. For the kids, it was a monkey off their backs because they all believed that we should have won the state championship the year before; we had a state-championship (caliber) team," Torres said.

The Red Raiders held on to both the OIA and state championships in 2012, when they finished with a perfect 12-0 mark.

The following year, however, Kahuku posted a 6-5 record and Torres was not retained over the offseason. He posted a 71-20 record in eight seasons, including five OIA championships and three state titles.

In the years that have passed, Torres — who continues to work on the Kahuku campus — has served as an assistant at Punahou, and more recently, back with the Red Raiders. Current Kahuku coach Sterling Carvalho was offensive coordinator under Torres in those state championship-winning years.

With no football practices to attend these days, Torres manages to keep busy with his 10 grandchildren — the youngest, a mere two-week old — but he's also gotten a little more serious about a longtime hobby.

"I'm trying to learn how to golf, so that keeps me busy," Torres laughed. "We would only do it on Super Bowl Sundays, but after a while we started playing more, so it was like, ‘We better be serious.' But you can't master it — it's too hard — but that's what's so good about it; that's why it's so challenging."