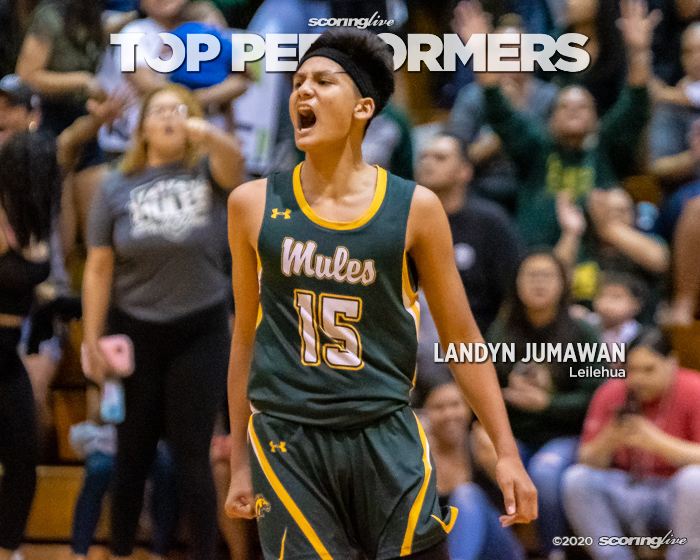 Count Leilehua boys basketball coach Chad Townsend among those not surprised by the season that Landyn Jumawan has put together.

The sophomore guard is averaging a team-best 14.9 points per game for the Mules (13-1), who are ranked sixth in this week's ScoringLive/Hawaiian Electric Power Rankings.

Although it is Jumawan's first season on the Leilehua varsity team, he has benefitted from a long-established familiarity with Townsend.

"During the offseason I help the dad (Josh) with the club he runs (Posse Basketball), so we train Landyn year-round," Townsend said. "Landyn's been to Vegas three, four times in the summer, so we kind of knew what to expect because going into this (high school) season he went again and played in the varsity level at the Bigfoot Hoops Tournament in Las Vegas."

Townsend describes Jumawan's game and style as "new school, but with a little old school mixed in.

"He's very good at shooting that mid-range jumpshot that a lot of people forgot about," Townsend said. "He's very versatile, he's good at the long ball, he can shoot the 3-ball and he can take it to the hoop, but it's nothing real flashy — just a pump fake, maybe a hesitation move and go. He can kill you anywhere from the long ball or at the rim, but he really shines when he shoots that mid-range."

Jumawan's skill set on offense can make for a tough matchup for opposing defenders, but his own defense is not to be overlooked.

"With that mid-range (shot), it makes him very tough to guard because he can pull up on a dime, whereas a lot of guys will have to gather themselves, but he's got a very quick release and that's a strength of his that he's put in a lot of work into and then defensively he's very long, he's got quick hands — maybe the best hands on the team — and he's very good at anticipating," Townsend said.

Those quick hands were on full display Monday night, when Jumawan recorded seven steals in Leilehua's 82-53 win at Waiakea in the first round of the Snapple/HHSAA Division I State Championships.

"That was big," said Townsend, whose team recorded 21 steals and forced 22 turnovers by the Warriors. "Any time a guy puts the ball within his reach, it's a threat to get stolen because his hands are very quick."

Jumawan hit three of his team's 10 3-pointers in the win and finished with 19 points, three rebounds and three assists.

In Leilehua's three games in the Oahu Interscholastic Association tournament, Jumawan averaged 14.7 points, including a game-high 17 points on 7-of-15 shooting from the field, with three assists, two rebounds and two steals in a last-second 59-58 semifinal loss to Kahuku.

"Going into that Kahuku game, our biggest worry about keeping him out of foul trouble because he tends to reach sometimes and be aggressive, but he played tough. He showed that he was able to get up there with some of the stronger and more experienced players that Kahuku has and that's what impressed me more," Townsend said. "I knew his offense would be there, but his defense has been really helping us as well."

Two nights later, Jumawan poured in 16 points with eight rebounds, two assists and one steal in a pivotal 63-50 win over Kalaheo to help the Mules secure a third-place finish.

Jumawan also brings versatility in his 6-foot, 1-inch, 170-pound frame, which has allowed Townsend to play him anywhere from his natural position at shooting guard, to the small forward and even power forward spots.

"We ask him to do a lot. On defense, sometimes he can be on a quick point guard and sometimes we will put him on one of their taller defenders and ask him to try matchup with him, so it's a wide range of who we ask him to guard sometimes," said Townsend, whose teams primarily relies on man-to-man defense.

While Jumawan's defense sometimes goes under the radar, his offensive production has put him in the limelight. He opened the preseason by draining a season-high five 3-pointers as part of 19 points against Mid-Pacific. He notched 22 points against Saint Louis two weeks after that and his regular-season best was a 20-point effort in a win over Kapolei in late January. Jumawan owns the fifth-highest per-game scoring average among all OIA D1 players.

"He's one of the guys that, even if our offense isn't going the way that we want, he can create his own shot. He can give us instant offense when we're in a drought sometimes and we really bank on that," Jumawan said. "He's been really consistent for us, but I think the biggest thing that surprises me about him as a sophomore is he doesn't shy away from big games, he actually gets up more for them. He doesn't shy away from the spotlight, he loves those games, that's what he really gets up for."

Jumawan, a 75-percent free-throw shooter, is a rare three-sport athlete. He is a member of the Mules' football team during the fall season and competes in volleyball in the spring.

"He always puts in work, but he's able to balance his school work. He's above a 3.0 (grade point average), so he puts in the work on and off the court, but it doesn't surprise me that he's excelling in basketball. After football practice he would come in the gym around 6:30 (p.m.) when we have club practice and he'll get a hundred shots up before he goes home, so he loves to play. He's one of those very few kids these days that instead of playing video games, he'd rather go to the park and shoot around."

Of the five OIA teams to qualify for this week's state tournament, Leilehua was the lone team out of the Western Division to do so.

Jumawan and the Mules will play top-seeded Kamehameha in Wednesday's quarterfinal round. Tip-off is scheduled for approximately 7 p.m. at McKinley's Student Council Gymnasium.

Quintan Akaka, Baldwin — Scored 17 points in a win over Lahainaluna

Oscar Cheng, Kahuku — Scored 16 points with 15 rebounds and four blocks in a win over Leilehua and scored 25 points with 17 rebounds, one steal and a block in a loss to Moanalua

Holden Ioanis, Baldwin — Scored 16 points in a win over Lahainaluna

Malino Jacinto, Lahainaluna — Scored 16 points in a win over Maui and scored 17 points in a loss to Baldwin

Andrew Jones, Kalaheo — Scored 18 points with 11 rebounds and one steal in a loss to Moanalua

Noah Omori, McKinley — Scored 25 points, including seven 3-pointers, with two rebounds, one assist and a steal in a loss to Roosevelt

Isaiah Richards, Baldwin — Scored 23 points in a win over Lahainaluna

Tre Rickard, Lahainaluna — Scored 18 points in a loss to Baldwin

Kuikana Ross, Baldwin — Scored 22 points in a win over Lahainaluna

Sage Tolentino, Maryknoll — Scored 18 points in a win over Damien

Drake Watanabe, Roosevelt — Scored 15 points with 12 rebounds, one assist and a block in a win over McKinley

Buddy Betts, Kamehameha-Hawaii — Scored the lone goal in a win over PAC-5

Johnnie Dodge, Punahou — Assisted on one goal and scored another in a win over Mililani

Jacob Moore, Punahou — Assisted on one goal and scored another in a win over Kalani