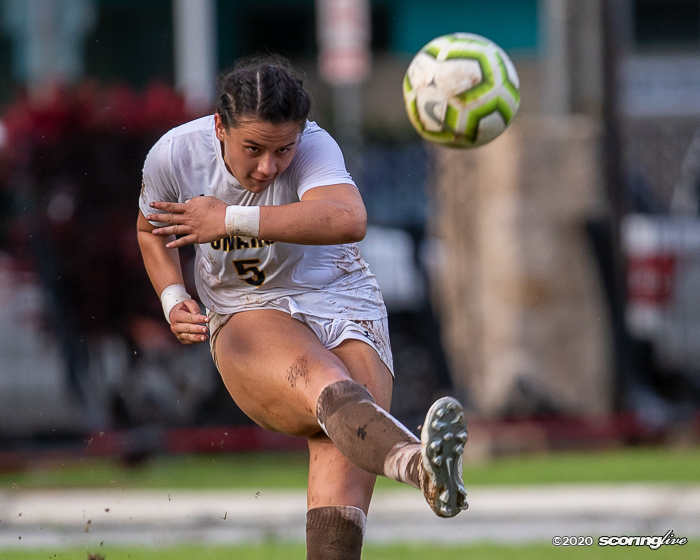 Punahou center back Jordan was a sentry for the Buffanblu Friday afternoon against Iolani. Michael Lasquero | SL 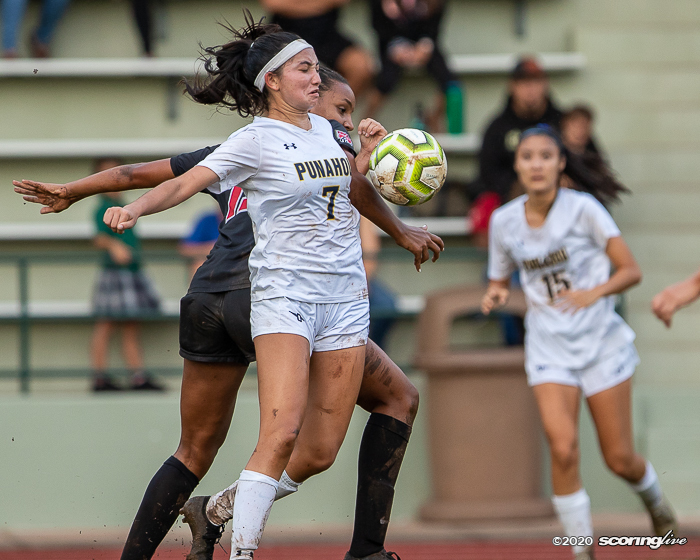 Punahou girls soccer coach Shelley Izuno can't help but gush over the depth of talent that she possesses this year. And it took just about all of that talent to help the top-ranked Buffanblu deny a pesky Iolani team Friday afternoon.

While it was Allie Lam's game-winning goal just mere seconds before the final whistle that got most of the attention following the hard-fought 2-1 win at Kozuki Stadium, there was no shortage of contributors for the visitors.

For starters, there was the opportunistic Paris Sellers, who gave Punahou an early lead when she put away a loose ball in front of the goal just six minutes into the contest.

Sellers, a senior forward, reminded herself what her father has told her so many times over the years.

She did just that that and capitalized on the ball that was mishandled by the Iolani goalkeeper. The result was Sellers' second goal of the season.

"It's a wet day today, super muddy and I saw the ball kind of slipped (through the goalie's hands) and I just kind of blacked out, went for it, drove myself," Sellers recalled.

Izuno said the scenario is one that the Buffanblu have spent much of their time on in practice.

"One thing we always try to emphasize is cleaning up a dropped ball and to me it was the right person in the right place at the right time and being able to find the net," Izuno said.

Not to be overlooked was Adriana Maroney and the work she put in on both offense and defense. Maroney, a 5-foot-6 junior, played attacker in the first half before dropping back to mark Iolani's 6-foot forward Sasha Asselbaye after the break.

"Adri can play everywhere," Izuno said. "Adri and Ellie Gusman, Allie Lam — the girl who scored the (game-winning) goal — I can literally put them anywhere on the field and that's something I kind of look for. I have multiple kids I can put anywhere and that shows because I can just move them wherever we need them to go."

Lam played the role of hero, but she passed much of the credit to her defensive teammates, specifically the back line of outside-backs Legacy Kalua and Taylor Matsubara, along with center-backs Jordan Lau and Taryn Kaneko.

"There was definitely pressure, more than we're used to, but our defense played really, really well. We were very organized back there and that's all the center-backs, they were really talking to our defense and it really helped," Lam said.

Lau, who is listed at 5-feet, 10 inches tall and as a midfielder on the team rosters, stood out but not just because of her height. The junior halted several Iolani scoring threats and often served as the last line of defense in front of goalkeeper Tiani Wayton.

"In a year's span she's grown so much just in terms of execution, playing smart, being better with the ball, her maturity," Izuno said of Lau. "Her ability to compose herself is huge and she's really been a big player for us and it shows every game."

Like any good defense, the Buffanblu backline played with cohesion and benefitted from strong communication. That was evident by both their play and their readiness to come to each other's aide.

When Kaneko went down with a leg cramp, Lau was there was stretch it out for her. Not long after that, an Iolani attacker appeared to get free for an open shot on goal after a throw-in, but Kalua pinched in from her spot out wide just in time to disrupt the shot attempt.

And then there was Wayton herself.

The 5-foot-4 junior is in her first season as the starting goalie and for much of the year she split time with sophomore Kylie Pascual.

Wayton turned in a stellar performance between the posts and made several hard-charging runs off of her line to beat Iolani attackers to long balls. Wayton made a couple of first-half saves in a span of a few minutes to protect her team's one-goal lead.

Early in the second half, Wayton got in the way of Ali Yoshida's header attempt, which went over the cross bar. About a minute later, Wayton swatted away an Iolani chance on the far post. That led to the Raiders' first corner kick of the game, which eventually found KK Uemoto. Uemoto fired a right-footed shot that was headed for the right side of the goal, but Wayton made a diving save on the play.

"Tiani had the game of her life. She saved our butt so many times," Lam said. "I'm so thankful that we had her in the goal."

Sellers said Wayton has earned the trust of her teammates, but it's her belief in herself that makes her special.

"Tiani is the most incredible keeper when it comes to free balls — I mean, she's off her line all the time, which is something you can't teach in a keeper, you know?," Sellers said. "It's something that they have to kind of learn on their own and Tiani really saves us a lot just feeling confident in herself to come off the line and I think our defense also has confidence in her, which is super good as well."

Izuno credited goalkeepers' coach Casey Nagatoshi for getting Wayton up to snuff.

"She's a softball player that's been playing keeper since seventh grade and Casey is her coach, he's the coach for the entire program and he puts his heart into teaching them and she does really well for a kid that plays goalkeeper three months out of the year," she said.

To be sure, the victory was the result of a collective effort. After all, it required the Buffanblu to overcome a situation it had not really come across this season.

"No, we've never been in a situation that tight, especially in the last couple of minutes," Lam said. "But I think that this whole week we've known that we are gonna play Iolani and they're a tough competition and so we've been training super hard at practice and it's unbelievable to win like that. This game was super important for us … and we got very, very fortunate on this one."

Just as the group prepared for the match in unison, they celebrated the win in much the same manner.

Izuno's couldn't hide the smile on her face as she gazed across the field as her players greeted their families and friends.

"I'm just super proud of them," she said. "I don't know, I'm kind of speechless. It's just so nice to see them just do it for each other."

The seniors turned in prolific scoring efforts for the Kapolei boys soccer and Kauai girls basketball...

The two teams will meet in the second match at Kapolei's field Thursday night.

Rough Riders trailed 19-10 after the first quarter, but scored 20 points in the next two periods.

Warriors, Buffanblu remain even in ILH race after tie

Punahou's Allison Little scored in the 21st minute, but Anuhea Aluli netted the equalizer for Kamehameha...

Alyssa Leong's goal in the fifth minute was the difference in a blustery match at Kaiser Stadium.

Hilo makes first appearance on the boys side while KS-Maui and Kauai join the Girls Top 10.