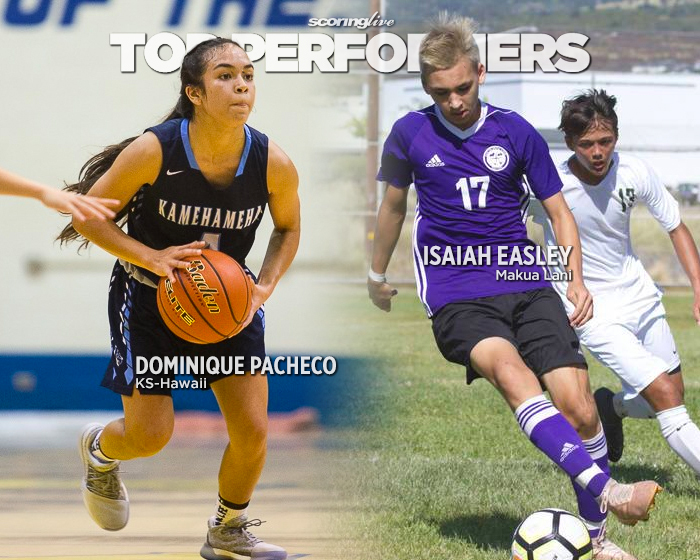 Female Athlete of the Week: Dominique Pacheco, Kamehameha-Hawaii basketball
Dominique Pacheco doesn't mind doing it all. In fact, at times she doesn't even realize that she is.

Such was the case last Friday, when the Kamehameha-Hawaii senior scored a career-high 40 points to rally the Warriors to a 59-53 win at Honokaa. The 5-foot-2 guard shot 17 of 24 from the free-throw line and helped her team rally from an early 11-0 deficit for their fourth straight win to the regular season.

"She was shocked," Warriors second-year coach Dominic Pacheco said of informing his daughter that she had reached the 40-point plateau. "She just didn't know. She just kept playing until it was over."

The host Dragons built an early lead and held a slim edge after the opening quarter.

"They had a great game plan and they jumped on us. I remember at one point they were up 7-0 and then it was 11-0 and 11-1 and it kind of flustered the girls and I could see ‘Nique kind of frustrated and I remember one of our coaches telling her that ‘you gotta step up, you gotta take over,' " Pacheco said. "When the score was 11-1, I think she realized, ‘OK, it's gotta be me, I gotta do everything,' so that's when you started to see her take over and it was really something to see that she was playing on both ends of the floor."

Dominique manufactured a handful of her points off of steals and fast break transitions. Sometimes she pulled up for jump shots and others she got the to basket was able to either finish at the rim or draw a foul to get to the free-throw line.

"She had a lot of steals, she hit a few 3s in the game, I played her in the high post, she hit some elbow shots, she attacked the basket, she did everything she had to do," Dominic Pacheco said. "At one point in the second half she scored a quick eight points within 30 seconds — we were trapping and she just took over at that point."

The younger Pacheco began to cramp in her calves at one point in the second half.

"She played to exhaustion. I had to call a timeout to keep her in the game just to shoot free throws, so you just could see a different mission she was on to make sure she wasn't gonna lose the game," her father said.

Whereas Dominique played a complementary role to former standouts Jordyn Mantz and two-time All-BIIF D2 player of the year Saydee Aganus in years past, she has assumed the role of go-to player for the Warriors this year.

"With the team that she played on for the last years, she could just play her normal position (point guard) and there were enough scorers on those teams where she didn't have to really come out and shoot the ball and attack the basket. She was a distributor because they had a lot more talent scoring-wise on those teams with Jordyn and Saydee, where all you had to do is give them the ball, so it was a lot easier for her," Dominic Pacheco said.

The 2018-19 season got off to a promising start for Dominique, but a severe ankle sprain largely derailed her junior campaign and a shot at league player of the year honors.

"We were undefeated in D2 with her, but in the playoffs she was playing at about 60, 70 percent and it wasn't good enough. We still got to the state tournament, but she wasn't 100 percent," Dominic Pacheco said.

Kamehameha-Hawaii lost in the semifinals of the BIIF playoffs and went two-and-out in the state tournament. That experience of falling short one year after helping the Warriors capture the D2 state crown in 2018 has motivated Dominique for her senior season.

Dominic Pacheco, who played for legendary coach Jim Alegre at Radford, said his daughter had hoped to perform well for their many relatives on Oahu, but her ankle simply did not cooperate.

The father and daughter have been coach and player on Dominic's Hoop Dreams travel team for most of Dominique's life.

"As she gets older she kind of sees things differently on the court and I see her telling me, ‘no, this is open, we should run this,' and that daddy-daughter kind of stuff you butt heads, but I kind of leave it up to the assistants to talk to her more," Dominic laughed.

Pacheco previously served as coach of the Warriors' boys team, but is relishing the chance of coaching Dominique in high school.

"It's an awesome opportunity. I thank Kamehameha Schools for giving me that opportunity to coach my daughter; what a blessing it is. I do it during the summer, but to coach her during her junior and senior years of high school is just a blessing," he said.

Dominique and the Warriors (4-0) sit in first place in the BIIF D2 standings. They
continue league play Saturday afternoon, when they visit Kau, before hosting No. 8 Hilo Tuesday night.

The junior striker on the boys soccer team ranks second in the state with 11 goals scored on the season and has the Lions (5-2, 15 points) well-positioned atop the Big Island Interscholastic Federation's Division II standings.

Easley, a 5-foot-10, 145-pound striker, has found the back of the net in six of his team's seven games and is coming off of his most prolific performance, when he scored a hat trick in a come-from-behind 3-1 win over Kamehameha-Hawaii Saturday.

"He was quite the handful for them," Makua Lani first-year coach Teva Beatty said.

The Warriors took the lead about 15 minutes into the game — in spectacular fashion.

Beatty said he adjusted his team's formation after halftime to better defend the Warriors' wide attacks.

"We were starting to find a lot of success defensively and then Isaiah just kind of broke through and took over and we dominated the second half," Beatty said.

Easley scored his second and third goals on breakaway runs. The first game around the 55th minute and gave Makua Lani the lead for good. He added an insurance goal about 10 minutes later of finish out the scoring.

"He was able to get behind their line and create opportunities and finish and capitalize on it, but just being able to creak down the back line on runs and then distributing the ball, too," Beatty added.

Beatty served as an assistant prior to taking over the team this season. He noted that Easley, a third-year starter, possesses a diverse set of skills in addition to a competitive nature that may not always come through in his play on the pitch.

"He's a very crafty player. He's got great speed, great ball control, he's got a great strike, but he's real playful," Beatty said. "It's not that he fools around so much, but he just has a lot of fun on the ball and he's real crafty with his shot selection. He's very calm when he's in front of the goal, he doesn't get roused and he has really quick feet and a great touch."

Just as Easley's game has evolved over the years, so has his role for the Lions.

"He's definitely more of a leader this year versus the years past. As a junior he's not the captain of the team — we have a senior captain — I imagine next year he'll be the captain of the team, but definitely he's a leader and he's also been mentoring a lot of the younger players because we have a lot of sophomores this year, so he's kind of a mentor, especially to the attacks, my forwards."

The win over the two-time defending BIIF D2 champion Warriors helped the Lions rebound from a 1-0 loss to Waiakea, but more importantly vaulted them into sole possession of first place in the league standings.

"That was huge, we celebrated. We saw on the field as long as we could just to soak it up, because to be able to beat Kamehameha at home, on their turf was a big accomplishment. It helps us in our ranking, but more so honestly, just to be able to beat a big school for us being a small school is exciting," Beatty said.

Makua Lani, a small private school on the slopes of Hualalai volcano, was founded in 1992. It has an enrollment of 137 students in the eighth through 12th grades.

The Lions, who play their home games at the Old Kona Airport Park reached the D2 state tournament on Oahu last February, but lost in the quarterfinals — one round short of playing in the main stadium at the Waipio Peninsula Soccer Complex. They went on to win their next two matches in the consolation bracket and finished fifth.

"The idea of representing Makua Lani at states energizes Isaiah and the team as a whole to practice and play with the intensity necessary to make it into the stadium. The team wants it and I believe we have the tools to get there. Isaiah is a big part of that equation and like all top strikers know, he needs to score when it matters the most," Beatty said.

Easley and the Lions continue league play with a trio of games next week. They will visit Hilo Tuesday before hosting Keaau Thursday and Pahoa Saturday.

Elijah Blankenship, Waiakea — Scored 19 points in a win over Konawaena

Kaipo Burnett, Nanakuli — Scored 17 points in a loss to Radford

Oscar Cheng, Kahuku — Scored 20 points in a loss to Kailua

Brandon Chung, Kalani — Scored 19 points in a loss to Roosevelt

Elijah Kahue-Parker, Mid-Pacific — Scored 18 points in a win over Nogales

Landyn Jumawan, Leilehua — Scored 17 points with six rebounds in a win over Aiea

Kamana Lapina, Mid-Pacific — Scored 21 points in a win over Nogales

Kordel Ng, Kamehameha — Scored 27 points with seven steals, two assists, two blocks and a rebound in a win over Canyon

Nathaniel Okamoto, Aiea — Scored 23 points in a loss to Leilehua

Rayson Padilla, Hilo — Scored 17 points, including three 3-pointers, in a win over Hanalani

Luke Pardini, Kalaheo — Scored 18 points in a win over Kaiser

Tre Rickard, Lahainaluna — Scored 18 points in a loss to Baldwin

Keegan Scanlan, Waiakea — Scored 20 points in a win over Konawaena

Andrew Toney, Radford — Scored 18 points in a win over Nanakuli

Drake Watanabe, Roosevelt — Scored 19 points, including three 3-pointers, in a win over Kalani

Carson Yoshida, Kekaulike — Scored 18 points in a loss to Maui

Chloe Clemons, Kalaheo — Scored 29 points, including three 3-pointers, in a win over Farrington

Sid Dominguez, Kalaheo — Scored 16 points, including three 3-pointers, in a win over Farrington

Caiyle Kaupu, Konawaena — Scored 28 points in a win over Keaau

Jordyn McCutcheon, Molokai — Scored 15 points in a loss to Lanai

Lilehina Oyama, Kalani — Scored 18 points in a win over Farrington

TC Pahukoa, Kekaulike — Scored 17 points in a loss to Maui

Julien Parado, Campbell — Scored 14 points in a loss to Kapolei

MJ Peralta, Farrington — Scored 23 points in a loss to Kalaheo

Holly Quirit, Castle — Scored 14 points in a win over Kaimuki

Kylenna Rieta, Maui — Scored 30 points in a win over Kekaulike

Kaliana Salazar-Harrell, Konawaena — Scored 25 points in a win over Keaau

Kapena Tagani, Honokaa — Scored 25 points in a loss to Kamehameha-Hawaii

Taylor Tateyama, Roosevelt — Scored 17 points, including five 3-pointers, two assists, two steals and a rebound in a win over Anuenue

Gwendolyn Villanueva, Kailua — Scored 18 points in a loss to Kahuku

Kohl Nakamura, Waipahu — Scored the lone goal in a win over Leilehua