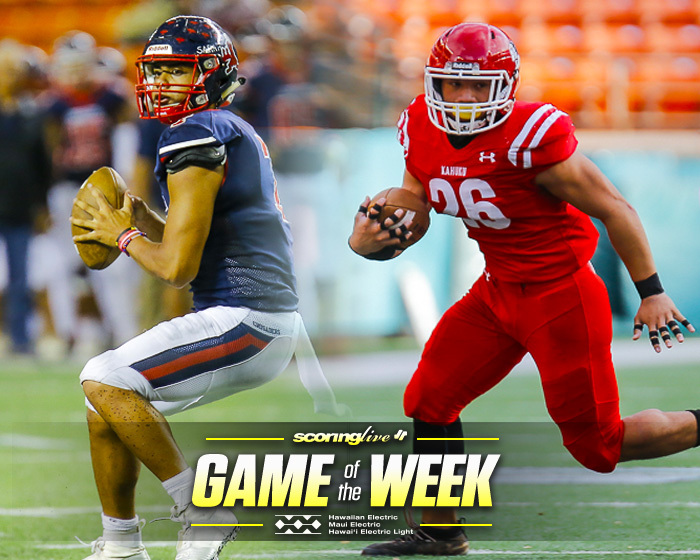 Friday night's championship game will mark the 13th time Saint Louis and Kahuku will face-off with a state title or Prep Bowl on the line. ScoringLive photo illustration

Big Red versus The Brotherhood.

The Pride of the North Shore against Kalaepohaku.

No matter which way you slice it, Kahuku-Saint Louis always makes for a big game — especially when its for all the marbles.

The Red Raiders (9-3) and Crusaders (11-0) will renew their long-running rivalry Friday night, when they face-off in the 7 p.m. title game of the First Hawaiian Bank/HHSAA Open Division State Championships.

The showdown will be the nightcap of a triple header of titles games at Aloha Stadium. Kapaa and Lahainaluna will play in the D2 final at 1 p.m. and be followed by Iolani and Hilo in the D1 championship at approximately 4 p.m.

Friday's game will mark the 13th time that Kahuku and Saint Louis will play in either the state championship game or the Oahu Prep Bowl. The Crusaders hold a 7-5 advantage in those games, including wins in the 2016 and '17 state finals, but the Red Raiders took five straight meetings prior to that.

"It's a rivalry game for us," said Crusaders assistant Gerald Welch, who has one of the more unique perspectives on the rivalry.

Welch was an all-state slotback at Saint Louis in the late '90s and helped the program capture the final Prep Bowl in 1998 and the first-ever state championship in 1999 — both times at the expense of Kahuku — before going on to a productive collegiate career at the University of Hawaii.

Prior to his current role as receivers coach at his alma mater, Welch served in the same role as a Kahuku assistant under then-coach Vavae Tata for the 2015 season — when the Red Raiders last captured the state title with a 39-14 win over, well, Saint Louis, of course.

"It's going on since the early ‘90s; every time they play us it's a dogfight," Welch said of the rivalry. "For some reason, when it's the state championship game they take it to another level and we're quite looking forward to that; we find that exciting."

While the Crusaders — who have been ranked in the top 10 nationally for much of the season — were expected to make a return to the state final, the Red Raiders have been, and continue to be, a work in progress, second-year coach Sterling Carvalho said.

"At the beginning of the season a lot of people didn't think that we would be in this position, so the resiliency of our team to be playing at this time, against a Goliath of a team in Saint Louis is such an accomplishment right now and we just need to finish," Carvalho said. "Finish what we started."

Kahuku ascent this season has been a steady one since it was shut out at Mililani back on Aug. 16, 32-0. Carvalho pointed to a 20-point win on the mainland a few weeks after the Mililani loss as a big step in his team's growth.

"It's a gradual development, but that Timpview game — when we had the boys 24/7 every day — it was a great moment, a great bonding experience, great turnaround, so coming from that our season started to get better," Carvalho said.

Kahuku's other losses this season came against the Crusaders on Sept. 14 and Punahou on Oct. 5.

The game against Saint Louis was called at halftime by mutual agreement of the coaches due to non-functioning lights at Aloha Stadium. The score went down as a 28-0 win for the Crusaders.

But Saint Louis isn't using that game as an indicator of what to expect in Friday's rematch.

"We know that they're a different team now than when we played them the first time," Welch said. "Their defense is playing vintage Kahuku defense, their offense is starting to run the ball successfully, so they present a great challenge for us and as far as coaches, we always talk about challenges and meeting it head-on and we look forward to this challenge."

The Crusaders' biggest challenge when the Red Raiders have the ball will be to slow down workhorse back Zealand Matagi. The 5-foot-10, 200-pound junior leads the Open Division with 1,420 rushing yards and 17 touchdowns. Matagi has recorded 220 carries and is averaging 6.5 yards per rush on the season.

Welch said Matagi reminds him of Jason Keo, a standout back for Kahuku in the mid-to-late ‘90s.

"He's kind of a big guy, can run, great balance. Kahuku has had a stable of running backs over the years and this guy is another one. He's only a junior right now but at 200 pounds, being able to run like he does and shift like he does and cut, I mean, he can either run past you or run you over," Welch said. "That kid is good and our defense knows a lot about him now and they're looking forward to the challenge of being able to stop him and we'll see how it goes."

Saint Louis has held opponents to just 28.1 rushing yards per game. Only twice has a team eclipsed the century mark against the Crusaders (Campbell 137 rushing yards, Bishop Gorman 146). On three occasions they have allowed negative rushing yards.

"I think coach Cal (Lee) challenging them week-in and week-out — every game he sees how they can improve and he tries to do that the very next week; I think our defense has been hungry," Welch said of the unit, which has allowed just three rushing touchdowns all season.

"Some teams moved the ball on us earlier in the season, but I think this last game kind of solidified what this defense is capable of and they shut Mililani down, got some good pass rush, good coverage and I think they played a great team defense and I hope to see that continue this week. I think our defense stepped up tremendous this last game and they helped us out a lot," Welch said.

The Crusader offense has been prolific all season, averaging 37.7 points and 414.2 yards per game. Washington State-commit Jayden de Laura has completed 72.4 percent of his passes this season and thrown for an Open Division-best 3,162 yards with 28 touchdowns against eight interceptions.

While Kahuku's defense has held opponents to 11.9 points and 170.6 yards per game, Carvalho acknowledged that his team will need some help to slow down the speedy receiving corps.

"Rain. A lot of rain, a slippery ball," Carvalho said. "You know, we cannot stop them, we just gotta make sure we'll be able to contain them at some time. Hopefully they'll make some mistakes, which they probably don't do, but we need divine intervention — luck, if you want to call it (that) — because Saint Louis is such a great team, but we just need to execute and play mistake-free football. We know that they basically run the same ‘Crusader right, Crusader left, cat right, cat left' — but they run it to such precision that we gotta make sure that we're on our cues and just hone in on our assignments."

The Red Raiders' confidence, however, might be at a high point in the season after winning their last four games, including a 7-3 win over Mililani in the Oahu Interscholastic Association championship game in late October.

"They're really starting to believe now. They know that in close games they're able to pull it off and when the going gets tough, they get closer together, so that's the kind of chemistry we want going into the state finals," said Carvalho, whose team held off Campbell in a down-to-the-wire 21-19 semifinal win last Friday.

Now it's about making the most of a golden opportunity.

"As I told our team, we know that this is the Thanksgiving week. We said, ‘first of all, be thankful that we're able to play football at this point. We're the only OIA school representing our conference at this time in all three divisions, so just be very grateful that we have this opportunity,' " Carvalho said. "Playing football you want to play the best. Saint Louis is the best right now and so what an opportunity we have. It's such a great experience and excitement that we have at practice, knowing the rivalry, knowing what's at stake."

A win for the Crusaders would extend their winning streak to 38 games and cap a third consecutive undefeated season. A fourth straight state title, however, isn't being taken for granted.

Not by a long shot.

"These kids come in and put the work in every day and they understand that if you're not the best guy out there, you're not gonna be out there, so being able to keep that edge with the competition (within) our own team, I think it keeps everybody focused, it keeps them working hard and it makes us a better team," Welch said. "The success we've had, I mean, it goes with a lot of hard work."