Chase for the Championship
Sabers, Trojans must be 'perfect' in hopes of upsets 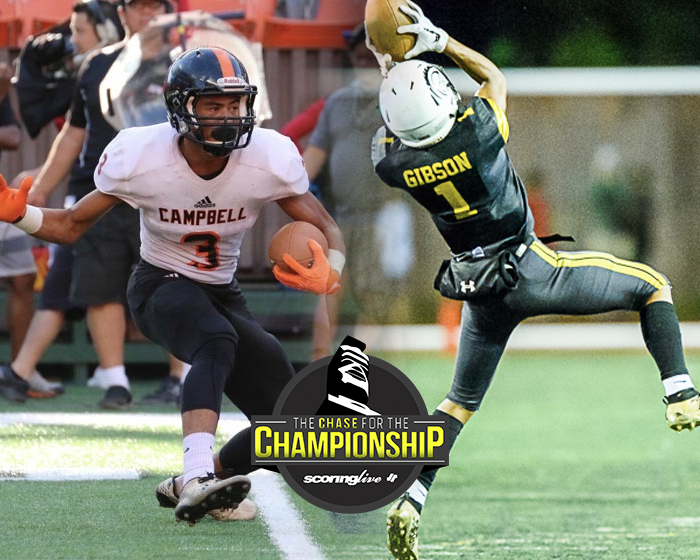 Pokii Adkins-Kupukaa and the Sabers face off against the Red Raiders for the third time this season, while Kanoa Gibson and the Trojans look to pull he upset of the top-ranked Crusaders. ScoringLive photo illustration

Anything less than a perfect game will not be good enough for the Campbell and Mililani football teams. Not this weekend.

The Sabers and Trojans will be decided underdogs when they take to the turf at Aloha Stadium Friday in the semifinals of the First Hawaiian Bank/HHSAA Open Division State Championships.

Campbell (6-5) will play Oahu Interscholastic Association champion and No. 2 seed Kahuku (8-3) at 4 p.m. Mililani (8-4) will take on Interscholastic League of Honolulu winner and top seed Saint Louis (10-0) in the 7 p.m. nightcap.

Trojans coach Rod York said it will require much the same from his team to have a shot at toppling the nationally-ranked Crusaders.

"We know that they're the champs and we know they're good defensively — I mean, in all three phases," York said. "We're going to have to play a perfect game."

The same four teams made up the 2018 state tournament field. Mililani beat Campbell and Saint Louis topped Kahuku in the semifinals, before the Crusaders captured their third straight Open Division title with a 38-17 win over the Trojans in the final.

The winners of Friday's games will advance to the championship game on Nov. 29 at Aloha Stadium.

Here's a look at both semifinal match-ups:

Friday's game will be the third meeting between the teams this season and the fifth in the last two years. Kahuku has won the last three times they have played, including a 35-7 regular-season win on Aug. 31 and a 46-0 rout in the OIA semifinals on Oct. 19 — both of them at Carleton E. Weimer Field.

But Johnson isn't reflecting much on those games at this juncture of the year.

"We had guys out for that last game and so we kind of throw it out the door. We're trying to look forward to what we're going to do this game and we focus on that," said the third-year Campbell coach.

The lengthy four-week layoff since a 28-14 win over Farrington to claim the OIA's third and final state berth has served the Sabers well.

"It was a good month. We kind of got everybody healthy — it's a good thing — and we're trying to get everybody back so we could play good football," Johnson said. "In our conference you just take your beatings and we're not a big, physical team. We're a little bit smaller team that just puts out on the field, so it takes its toll on the kids."

One Campbell player who Johnson hopes is finding his stride just in time for a playoff push is senior two-way standout Pokii Adkins-Kupukaa, a first team All-Hawaii performer each of the last two seasons. The 6-foot-1, 175-pound wide receiver/defensive back/kick returner missed the first eight games of the before making his 2019 debut in a win over Kamehameha on Oct. 12.

"He broke his foot right before we opened up the season, but we're hoping that he's back to form and we hope that he provides good leadership and he performs as an athlete," Johnson said.

No matter who's on the field for the Sabers defensively Friday night, it will come down to stopping Kahuku's vaunted rushing attack that averaged 361.0 yards in the two meetings this season.

"We know them, they know us, we just gotta be able to stop them," Johnson said. "They're gonna come at you and we're young in places that we wish we were a little bit bigger and older, but we're not — we're young."

The Red Raiders have allowed just nine points in their last three games. They are seeking their third trip to the Open Division final in four years.

After winning their first six games of the season to open 2019, the Trojans have been on the losing end of four of their last six contests, including a 7-3 loss to Kahuku in the OIA title game nearly four weeks ago.

York said the Oct. 26 defeat at the hands of the Red Raiders — who his team shut out 32-0 in the regular season — has fueled Mililani's drive since then.

"We lost the big game and the way we lost it — but at the same time, we're not going to let four points define us," said the 10th-year Mililani coach.

While the break has mostly been a good thing for the Trojans, York said it was tough to plan for nearly a month between games.

York said that much of the time in practices were focused on fixing the team's recent offensive woes. In addition to being held to just a field goal by Kahuku in the OIA championship game, Mililani failed to get on the scoreboard in its regular-season finale, a 3-0 loss to Punahou.

"We got a lot of things worked out and we're gonna keep it simpler for our kids and then schematically we're able to game plan it a lot more because we've got so much time (between games), but definitely the offense needs to get clicking and that's what we focused on a lot," York said.

The Saint Louis defense has been a stingy one all season, as opponents are averaging just 14.6 points and 196.9 yards of total offense per game.

Their most recent meeting took place at Aloha Stadium on Sept. 27. Saint Louis won the regular-season game, 54-21, behind Jayden de Laura's five pass TDs and 380 yards through the air.

"We'll need to get our offense going, we need to score and definitely move the chains (because) we can't leave our defense out there the entire game," York said. "We feel like we got the best defense, but we're going against the best offense, for sure, and last time they scored at will, so we made some changes and hopefully it'll work."

Saint Louis has won the last four meetings against Mililani. The Trojans' last win over the Crusaders came on Aug. 16, 2014, in a 63-47 shootout. The non-league game at John Kauinana Stadium saw quarterbacks Tua Tagovailoa and McKenzie Milton combine to account for 12 of the 16 total TDs scored in the game.