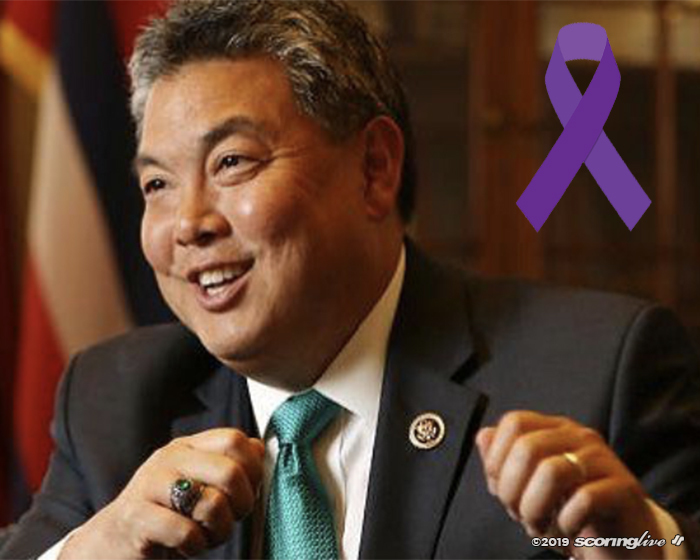 Saturday's walk begins at 8 a.m. from the K. Mark Takai Veterans Memorial Aquatic Center, which was renamed in honor of the late U.S. Representative and Hawaii Army National Guard lieutenant colonel on July 1, 2017 — what would have been the 1985 Pearl City graduate's 50th birthday.

A life of service would be an apt way of describing the life of the late K. Mark Takai.

The 1985 graduate of Pearl City High School served his constituents for more than 20 years, right up until his passing in July of 2016. Takai's legacy, however, lives on through his foundation — and his family.

Takai's daughter, Kaila, is making sure of that.

Kaila, a junior at Pearl City, is serving as student chairperson of the inaugural K. Mark Takai Walk For Hope, which takes place this Saturday at Patsy T. Mink/Central Oahu Regional Park.

The event will raise funds for the K. Mark Takai Foundation to promote awareness of pancreatic cancer, which took the life of the longtime state representative and United States congressman at the age of 49 — just nine months after he received the diagnosis.

"I think pancreatic cancer is one of those that is kind of hard to detect. When my dad had it, he had stomach pain and went to the doctor, but they said everything was fine, but he had a gut feeling that something was wrong," Kaila said. "It took them a while to find the cancer and a lot of people who find the cancer find it too late and they're unable to survive from that and that's why I think we need to promote awareness of it more."

Saturday's walk starts from the Veterans Memorial Aquatic Center, which was renamed in Takai's honor approximately a year after his passing — on what would have been his 50th birthday.

Takai achieved the rank of lieutenant colonel in the Hawaii Army National Guard and received numerous awards for distinguished service. Before going on to a decorated military career, Takai was a four-time state champion swimmer at Pearl City and a two-time high school All-American in the 100-yard breaststroke, as well as a 1985 inductee into the Hawaii High School Hall of Honor. He also won a conference championship while swimming for the University of Hawaii, where he served as both editor-in-chief of the student newspaper, Ka Leo O Hawaii, and president of the Associated Students of UH.

"My family, we wanted to continue his legacy because he cared so much about the people and making a difference, so we felt that it was appropriate to have it during the month of November and at the Veterans Memorial Aquatic Center, which is named after him, so it all kind of connects," Kaila said.

The walk is being sponsored by the City and County of Honolulu and Pearl City High School's Culinary Arts, Health, Science and Leadership Academy (CAHSL). Nikki Takai, sister of the late politician and a CAHSL counselor, has played a key role alongside her niece in planning Saturday's event.

"The walk is to continue his legacy through his foundation and raise money and awareness for pancreatic cancer research, but also for scholarships because he did scholarships for students in the Pearl City and Aiea area for twenty years, so we wanted to continue that legacy for him as well," Nikki Takai said.

Students from CAHSL, as well as some of Kaila's teammates on the Chargers' girls soccer team, are among the 100-or-so volunteers expected to assist with Saturday's walk.

"Kaila didn't want to make it about her and go asking her teammates like to come out, but I told her that people want to help her," said Daphne Okunaga, an assistant coach on the team and math teacher at the school. "If they're not able to go to the walk itself, they want to help her in other ways, whether it's been posting on social media to help promote it, but they definitely want to help."

Longtime Pearl City coach Frank Baumholtz III has nothing but good things to say about Kaila, a midfielder/forward who has started on the varsity team since her freshman season.

"The principle of the thing is very good; Her dad obviously was a good person and she's an outstanding young lady herself — always has been — I can't say anything else other than I love her. She's a a great kid all-around and a good student," Baumholtz said.

Kaila, however, is quick to navigate the discussion back to the cause.

"The walk is named for my dad, in his honor, but it's more about the pancreatic cancer research and the funds we're raising for that. We just want as many people as we can get to show up Saturday; our goal is to raise as much money as possible," Kaila said. "I think it's going to be a good environment and hopefully everyone will be happy to be there, happy to be walking for a good cause."

For more information on the Walk For Hope or the K. Mark Takai Foundation, visit kmarktakai.com.

The seniors were paramount in wins for the Kailua boys' and HBA girls' hoops teams.