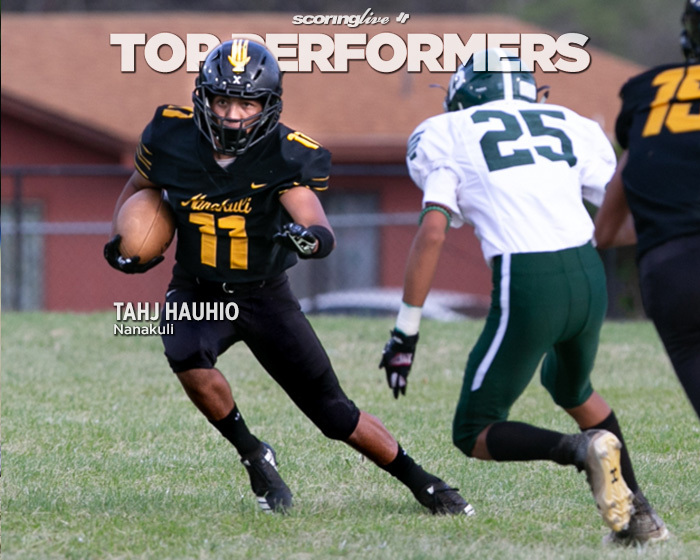 Hauhio, a junior slotback/running back and first-year varsity player, turned in a yeoman-like effort in the Golden Hawks' 28-21 win over visiting Kalani Friday night with 159 rushing yards on 31 carries. He also scored on a 5-yard touchdown run in the fourth quarter.

"Offensively, it was a good glimpse of what we're capable of," Nanakuli coach Kili Watson said.

The Golden Hawks pounded out 314 rushing yards on 64 attempts, an average of 4.8 yards per carry.

"We kind of switched it up to keep it more on the ground this week, as opposed to the prior weeks (when) we were going to the air," said Watson, whose team posted 260 and 225 passing yards against Molokai and Waialua, respectively, to open the season.

Hauhio had just one carry — for two yards — prior to the Kalani game, but proved his versatility Friday night.

"He was playing the running back position in the backfield, (but) I think at the same time, supplementing that game was the great blocking from the o-line. I think it was a good game for them," Watson said. "It means they're finally clicking and building that chemistry with one another because on the line there's only two returnees, so the other three guys are trying to get caught up and it was a pretty good game for them. You could see the chemistry being built and them working together."

Despite finishing with nearly 300 more yards from scrimmage than the Falcons, Nanakuli stumbled out of the gates. It fell behind 13-0 after Nathaniel Balangitao found the end zone with first-quarter TD runs of 9 and 4 yards. However, quarterback Sedric Crawford got the Golden Hawks on the board with a 1-yard TD run to cut it to a six-point deficit after the opening stanza.

"It was a slow start, we were down 13-7 in the first quarter, but I think after that when our three units were able to start clicking and build a rhythm, it was a definitely a game that opened up the boys' eyes as to what can be done if they execute their assignments," Watson said.

In the second quarter, Crawford tied the score at 13-all with his second 1-yard TD run of the game and after the Keola Bright PAT gave Nanakuli its first lead, the score grew to 21-13 with a 4-yard Crawford TD run.

"The defense definitely went out there and made stops and the offense was able to build off of it, but I think what helped build the ground game was those (short) nickel and dime passes to our wide receivers, Nainoa Paz and Kekoa Torres, on some short hitches that spread out the defense and after that we were able to run the ball a little more effectively," Watson said.

However, the Falcons got to within 21-19 after three quarters with Logan Lim's 4-yard TD run and evened the score at 21-all with his pass to Noah Ah Sam on the ensuing two-point conversion.

Hauhio's 5-yard TD run in the fourth quarter reclaimed the lead for the Golden Hawks and proved to be the game-winning score.

"The good thing with Tahj is he's a well-rounded athlete," Watson said of the 5-foot-6, 150-pound Hauhio, who also caught four passes for 37 yards Friday.

"Even if he's small in stature, he's quick and agile, but at the same time he's tough and he's not afraid to put his shoulder down and fight for those extra yards. He serves our offense as like that utility player and he's very dependable. If we need to, we can put him in the backfield and run a power/counter scheme, or we can also put him out in (at slotback) in the spread (formation) and get him out there in some passing routes," Watson said.

Watson describes Hauhio, who also runs track for the Golden Hawks, as a "downhill runner."

"He's got that mentality where he sees a crease and he just wants to attack it already. He won't necessarily try to make moves, but he's got that attacking mentality and it's the same out of the slot," Watson said. "If we throw a bubble screen out to him and a safety comes up on him, 90 percent of the time he's gonna dip his shoulder."

Watson praised Hauhio for his vision, something that offensive coordinator Edmound Ybarra has emphasized for the running backs.

"I was impressed with Tahj finding the initial creases," Watson said. "He missed a few secondary creases where he could have broke it off for a longer run, but we're just happy that he was able to find those initial creases on the line of scrimmage."

For the season, Hauhio has recorded 292 yards from scrimmage and two touchdowns. He is averaging 10.9 yards per reception and 5.0 yards per rush attempt.

Nanakuli avoided back-to-back losses for the first time this season with Friday's win, which served as a bounce-back of sorts after a 24-point loss at Waialua to kickoff the regular season back on Aug. 10.

"After the Waialua game, we were sitting in the locker room that night and we kind of expressed to each other that we got punched in the mouth that night and we didn't do anything about it," Watson said. "It just looked like Waialua wanted it more than us that night, so the theme for last week was that we gotta have that want, we gotta be proactive and make sure we execute our assignments and that way we can rebound from that loss and that Friday night was a good showing of want and we kind of accomplished our goal for the week."

The Golden Hawks (2-1 overall, 1-1 OIA Division II) return to the gridiron this weekend, when they host PAC-5 Saturday. Kickoff is scheduled for 6 p.m.

FOOTBALL
Cy Acohido, Leilehua — Recovered a fumble in the end zone for a touchdown and intercepted a pass in a win over Waipahu

Nuusegi Afoa, Pearl City — Had one sack, forced a fumble and recovered a fumble in a win over McKinley

Kaeo Akana, Roosevelt — Had six tackles, including three tackles for losses and two sacks in a win over Waialua

Naomas Asuega-Fualaau, Kaimuki — Rushed 12 times for 90 yards and three touchdowns in a win over Kalaheo

Titus Atimalala, Campbell — Caught seven passes for 98 yards with two touchdowns and had six tackles, one sack, a forced fumble and a fumble recovery in a win over Farrington

Nathaniel Balangitao, Kalani — Rushed 19 times for 99 yards and two touchdowns in a loss to Nanakuli

Jesse Canda, Konawaena — Caught seven passes for 65 yards and two touchdowns in a win over Kealakehe

Makanaokalani Canyon, Pearl City — Threw for 219 yards and two touchdowns on 14-of-23 passing in a win over McKinley

Kaihulali Casco, Lahainaluna — Had 11 tackles, including 2 1/2 for losses and one-half sack in a win over Kapaa

Zavier Ceruti, Campbell — Caught six passes for 164 yards and two touchdowns in a win over Farrington

Scott Chung, Roosevelt — Caught four passes for 83 yards and two touchdowns in a win over Waialua

Sedric Crawford, Nanakuli — Rushed 19 times for 85 yards and three touchdowns in a win over Kalani

Kahanu Davis, Kapaa — Rushed 24 times for 160 yards and two touchdowns in a loss to Lahainaluna

Jayden de Laura, Saint Louis — Threw for 276 yards and two touchdowns on 12-of-13 passing and ran for another score in a win over Kapolei

Kyler Dicion, Waialua — Had 12 tackles and one sack in a loss to Roosevelt

Koa Eldredge, Punahou — Caught four passes for 62 yards and two touchdowns in a win over Kamehameha

Kaipo Enos-Ho, Campbell — Scored on a 38-yard interception return in a win over Farrington

Lokana Enos, Kahuku — Had two sacks in a loss to Mililani

Alfred Failauga, Waipahu — Rushed 39 times for 182 yards and a touchdown in a loss to Leilehua

Dre Falls, Kaiser — Caught a touchdown pass and intercepted a pass in a win over PAC-5

Keneke Gusman, Roosevelt — Had five tackles, including three sacks, in a win over Waialua

Kyler Halvorsen, Kaiser — Made a 53-yard field goal and was 3 for 3 on extra point attempts in a win over PAC-5

Jaku Hanohano-Baptista, Leilehua — Had one sack and recovered a fumble in a win over Waipahu

Blaine Hipa, Campbell — Threw for 311 yards and four touchdowns on 23-of-39 passing in a win over Farrington

Jake Holtz, Damien — Threw for 247 yards and three touchdowns on 11-of-21 passing and rushed nine times for 70 yards and another score in a win over Radford

Wynden Hoohuli, Mililani — Had six tackles, including three for losses, two sacks and forced a fumble in a win over Kahuku

Cole Ichikawa, Iolani — Caught four passes for 82 yards with a touchdown and scored on a 40-yard punt return in a win over Aiea

Kainoa Jones, Konawaena — Threw for 189 yards and two touchdowns on 23-of-31 passing with one interception and also ran in another score in a win over Kealakehe

Kamryn Kahoonei, Kailua — Caught three passes for 86 yards and two touchdowns in a loss to Moanalua

Kainalu Lewis, Hilo — Had two interceptions in a win over Kamehameha-Hawaii

Caleb Matagi, Farrington — Had 4 1/2 tackles, three for losses, including one sack and forced a fumble in a loss to Campbell

Koby Moananu, Kaimuki — Caught four passes for 45 yards with a touchdown and intercepted a pass in a win over Kalaheo

Aalona Monteilh, Roosevelt — Scored on a 52-yard punt return in a win over Waialua

Jarvis Natividad, Damien — Caught three passes for 161 yards and two touchdowns in a win over Radford

Kaulana Navares, Mililani — Made field goals of 30, 35 and 38 yards and converted all three of his extra point attempts in a win over Kahuku

Guyson Ogata, Hilo — Scored on a 77-yard kickoff return in a win over Kamehameha-Hawaii

Sky Ogata, Roosevelt — Threw for 233 yards and three touchdowns on 15-of-24 passing in a win over Waialua

Kiaka Pio, Leilehua — Had two sacks and a forced fumble in a win over Waipahu

Devon Sa-Chisolm, Lahainaluna — Scored on a 98-yard kickoff return in a win over Kapaa

Jacob Saole-Sue, Kapolei — Had three sacks, forced a fumble and recovered a fumble in a loss to Saint Louis

Fuafiva Tulafale, Waipahu — Scored on a 19-yard interception return in a loss to Waipahu

Kainalu Tumpap, Saint Louis — Rushed for two touchdowns in a win over Kapolei

Jansen York, Moanalua — Caught nine passes for 154 yards and a touchdown in a win over Kailua

Mason Yoshino, Kaiser — Caught six passes for 140 yards and two touchdowns in a win over PAC-5