Press Pass
Mules' defense put to the test by Marauders 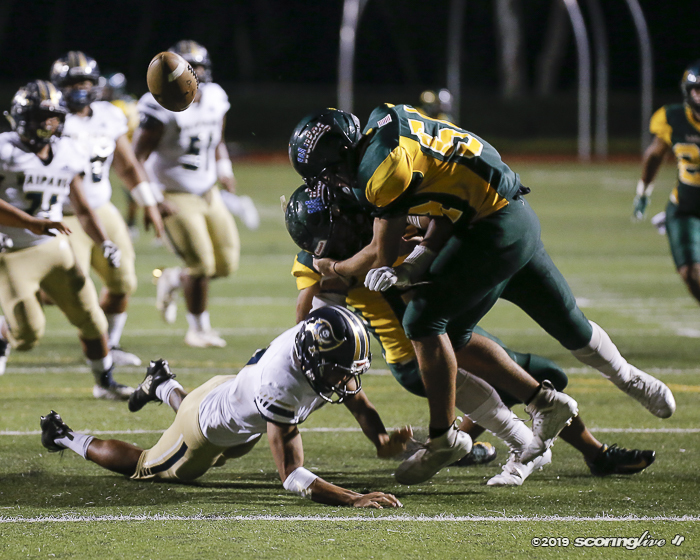 Kiaka Pio forced a fumble on one of his two sacks against Waipahu last Saturday night. CJ Caraang | SL

If there were any questions about the quality of Leilehua's defense — despite back-to-back shutouts to open the season — those should have been put to bed by the third quarter of the Mules' 23-13 win over defending state and league champion Waipahu Friday night.

It's not that the first half wasn't impressive — the Mules kept the Marauders off the scoreboard and limited them to just 67 yards of total offense at the break — but the third quarter was a true test of their mettle; one they passed with flying colors.

Waipahu received the kickoff to start the second half ran 19 plays before Leilehua got its first snap on offense with 6:30 left in the third.

Included in the long Waipahu drive was a quirky play where quarterback Cody Marques was stripped by Leilehua's Narwin Luther. One of Luther's teammates recovered it and was in the midst of returning it the other way when he was stripped before a Waipahu offensive line ultimately covered up the loose football. However, because there was a change of possession, the chains were reset to first-and-10.

Although the Marauders penetrated to as deep as the Leilehua 22-yard line on the long possession, they came up empty as they were backed up to the 45 before having to punt away. The Mules were able to overcome a pair of 15-yard penalties on the drive.

However, the Leilehua went three-and-out on offense and punted away from its own 12-yard line. The Marauders took over at the Leilehua 44, but turned it over two plays in when Cy Acohido made a sliding interception of a Marques' pass.

The ensuing Mules' offensive possession was doomed by an eight-yard loss on first down and ultimately resulted in another three-and-out and punt. The defense returned the favor though — thanks, in part, to Kalani Atwood's sack of Marques for a loss of seven yards on third-and-12 — and got the ball back.

Still Leilehua's offensive struggles continued. A false start penalty and an incompletion on first down, Kalei Akagi was intercepted by Waipahu's Fuafiva Tulafale, who scored on the 19-yard pick-6, one play later.

It was the first points allowed by Leilehua this season — albeit, not by its defense.

"I don't even know how long we were out there," said Mules coach and defensive coordinator Mark Kurisu. "It seemed like we were out there the whole quarter — it was our fault though — we had a turnover and (an interception return) and then (after the fumble recovery) we got stripped and they got the ball back, so it's something to learn from because if we had the ball right there, that just changes the momentum of the game and they did a great job.

"I don't know who made the play, but that guy just hustled and not just tackled the guy, but got the strip," Kurisu said. "Definitely that third quarter was huge to hold them to zero in that one."

In all, Waipahu ran 25 offensive plays in the third quarter to Leilehua's 10.

Junior defensive end Kiaka Pio said the Mules were up for the task.

"I think we were on the field almost the whole third quarter. It was pretty tricky, but I know we condition hard enough and a lot, so half of our players were in shape and ready to roll the whole quarter if we had to," said Pio, who had two of his team's five sacks and also forced a fumble in the win.

It didn't end in the third quarter; Waipahu managed just one first down in its first two drives of the fourth stanza and punted away both times. It wasn't until the game's final minute that the Marauders' offense found the end zone with Alfred Failauga's 22-yard touchdown run.

It was the first points allowed by the Mules' defense this season.

"It doesn't really mean anything, but to us, our mindset is to not let anybody score, so it was kind of hard, but our offense kind of slipped a little so we had to catch their back and finish it off to them," Pio said.

Leilehua's front seven defenders brought heavy pressure on Marques for much of the night, with Pio doing much of the harassment.

Kurisu said it's more than just the physical ability that makes the 6-foot-1, 235-pound Pio special.

"Just his maturity. He is a talent and he works really hard, for him he actually dropped a lot of weight — I think he dropped about 30 pounds — so he can stay in the game longer, he can move like how a normal d-end should be at, a high level d-end, so it's good to see him do well because everybody's going to look, he's a big guy, but he's fighting through adversity each day, especially on that football field," Kurisu said. "He doesn't have that same range of motion like everybody else, but he has great heart and I give all the credit to his parents."

Pio, who has recorded at least one sack in each game this season and has totaled 4 1/2 on the year, said that the offense's struggles are the team's struggles.

"There's no ‘I' in team, so if the offense falls the defense got their back and if the defense falls our offense got our back, so it's a team thing and overall it's about who's got each other's back," Pio stated with conviction.

Ultimately, the Mules allowed a total of just 120 yards Friday night, including a stingy 18 passing yards as Marques was held to 5-of-20 passing. Through three games, opponents are averaging only 4.3 points and 156.3 yards per game.

"It was good to see growth," said Kurisu, whose team avenged a season-ending loss to the Marauders in the semifinals of the OIA Division I tournament last fall. "I like to see the grind that they go through, pushing themselves, so it was a good turnout for us."

Leilehua, one of three teams in the state that are 3-0 (Punahou, Kaiser), will get another test this week when it visits unbeaten Moanalua (2-0) Friday night. Kickoff is scheduled for approximately 7:30 p.m.

The Spartans avenged three losses to the Warriors in ILH play to capture their second straight championship.

Spartans, Warriors will square off for D1 state hoops crown

Maryknoll turned back Damien, while Kamehameha rallied past Kahuku in Thursday's semifinals.

The Monarchs and Spartans will face off for a fourth time this season in Thursday's state semis.