Hawaiian Electric Game of the Week
No. 1 Crusaders to open with No. 7 Hurricanes 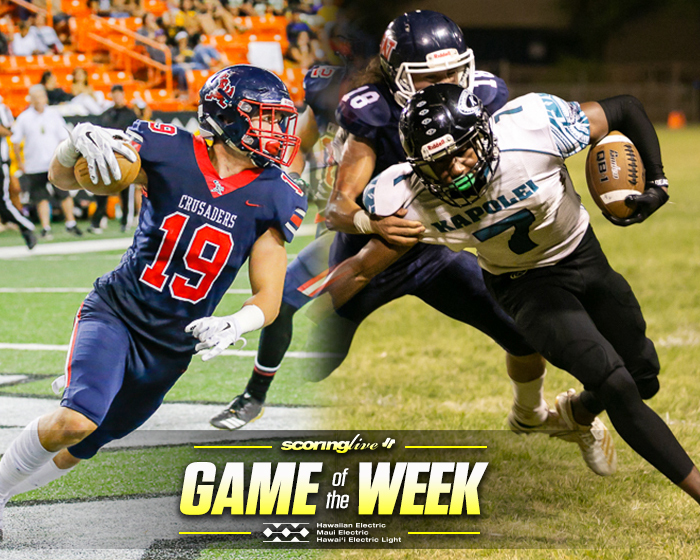 It's not that the Saint Louis football team is channeling its inner Allen Iverson, but the Crusaders are just about tired of all the practice.

After watching the first two weeks of the season come and go, Cal Lee's squad won't have to wait until the weekend to hit the gridiron. Saint Louis, the reigning three-time Open Division state champion and No. 1 team in the ScoringLive/Hawaiian Electric Power Rankings, will open defense of their title against seventh-ranked Kapolei Thursday night at the Alvin Nagasako Athletic Complex.

Lee said the feeling of anticipation is palpable at practice this week.

The Crusaders are ranked 11th and 12th nationally by MaxPreps and USA Today, respectively, and have won 26 consecutive games — not that they're counting.

"All you can do is practice and make sure that the players understand that this is a whole new season, whole new ball game and what happened in the past is way behind you so you try to make sure you do the things you have to do and try to get better, that's what we stress, don't be satisfied," Lee said.

Saint Louis returns a bevy of talent on both sides of the football.

Moanalua making moves in the @HwnElectric Football Power Rankings with its first appearance of the year in the Top 15. pic.twitter.com/bbLFcA7xU0

"Saint Louis is amazing, the best team in the state four years running," Kapolei coach Darren Hernandez said. "They have unreal talent, great coaching and a long tradition of excellence. We are pumped to be able to play against such a powerhouse. It will be a great experience for our team."

Despite the slew of studs on his side, it's always a big trepidatious when it comes to season openers, Lee said.

"I think anybody — I mean, it doesn't matter who it is — your first game is kind of a gauge of what you need to do because it's the first game. After ten games you probably know what you have to do, but to start off, I think there's a lot of questions: ‘Can you run the ball? Can you pass the ball? Can you play defense? How's the special teams?,' " Lee said. "Being that it's our first game, we'll see what we gotta do to get better, because you can try to simulate a game but it's never like that."

Lee noted that the Hurricanes (2-0) are no pushover, either. When the teams met last season, Saint Louis built a 23-point lead before holding on for a 30-22 victory. de Laura did not play in that game while nursing some bumps and bruises.

"Last year it was kind of a battle," Lee said. "They're well coached, they've got a good team — they've won two games, they're 2-0 — we just gotta go out there and do the things we do and hope that we can get the job done, but you gotta expect a good game because they're not 2-0 for nothing."

Both of Kapolei's wins this season — a 16-point victory over D1-Castle on opening weekend and an eight-point triumph over Waianae last Friday — have come on the road.

"Winning on the road is a big deal and it's not easy to do, so I'm proud of my coaches and especially the team," Hernandez said.

A key factor in both games has been the play of junior quarterback Noa Bailey. He went 20 for 37 passing for 306 yards with three touchdowns against the Knights and followed that up with a 20-of-28 effort for 245 yards and four TDs against the Seariders. Bailey has been intercepted just once in 65 pass attempts this season.

Bailey's favorite target has been 6-foot-2, 190-pound wide receiver De'Zhaun Stribling. The senior, a second team All-Hawaii pick last year, carries a scholarship offer from the University of Hawaii. Had 10 receptions in week 1 and 13 last weekend and finished with 134 receiving yards and two TDs in each game.

"Stribling is a real hard working kid and he deserves all the accolades coming to him because he's an unselfish team player willing to do whatever it takes for the team," Hernandez said.

Defensively, the ‘Canes are led by Oregon-commit and 6-foot-5, 270-pound defensive end Macael Afaese, 6-foot-3, 225-pound linebacker Kahoolewa Emmsley and 6-foot, 210-pound free safety Isaiah Mareko. Junior linebacker Jacob Saole-Sue has also had a solid start to the season. He came away with a 26-yard pick-6 in the Castle game and then notched a game-high 11 tackles against Waianae, including four tackles for losses and two sacks.

"They're really good, so it's going to take all 11 players, not just one, two, or three guys," Lee said. "It's gonna take all 11 knowing their assignments and doing what they need to do to be successful.

Kickoff between the Crusaders and Hurricanes Thursday is scheduled for 7:30 p.m.