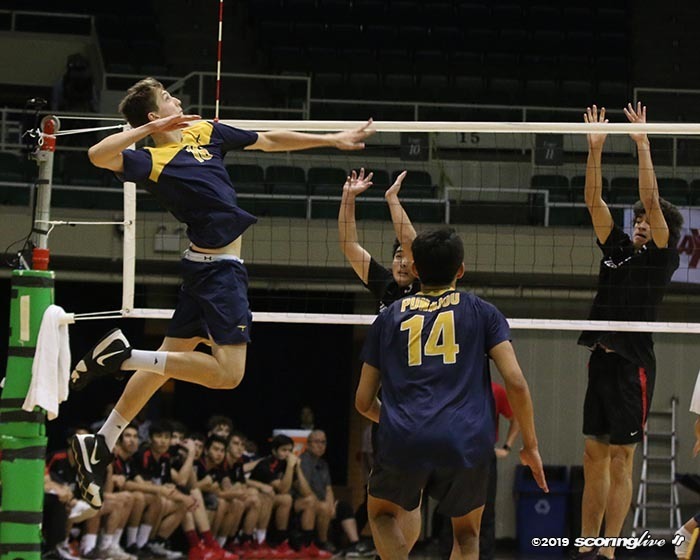 Punahou boys volleyball coach Rick Tune often talks about setbacks as lessons and matches as opportunities. His Buffanblu team did its share of learning over the course of the 2019 season, but in the end, it aced the final exam.

With its four-set win over Iolani Saturday night in the finals of the New City Nissan Division I State Championships, Punahou captured its 37th state title in the history of the storied program, but this time it did so as the underdog.

After seeing its string of 14 consecutive ILH championships come to an end at the hands of the Raiders less than two weeks prior, the Buffanblu used a complete team effort to reverse their fortunes in the state final.

Left-side hitters Jack Deuchar and Kawai Hong took an even 35 swings apiece and produced 17 and 10 kills, respectively, while right-side hitters Jakob Kimura and Claudio Clini added eight kills each, both on 19 swings. Out of the middle, Robert Allen put down seven kills and had 4 1/2 blocks, while Braxdon Simmons added four digs, three blocks, one kill and an ace.

The team grew by leaps and bounds over the course of the year, according to Deuchar, a third-year varsity member but first-year starter.

"We lost a lot of seniors last year, almost our whole starting lineup and it was tough," Deuchar said. "We had a bunch of young guys without game experience so we kind of struggled early on in the season and we've been blowing through teams for the past few years like it's nothing, so when we really got in close matches this year we didn't really know how to respond at the beginning of the season and our whole goal towards the middle and end of the season was to work through those tough sets, the close sets, and I think we were able to do that latter in the season, which was why we were able to win the state championship."

The boys in blue — plus Suzumoto in his white libero jersey — had lots of fun Saturday night, especially at the net. Punahou built a wall on Iolani's left-side hitters and held the ILH champs to a minus-.007 kill percentage.

The Buffanblu had nine blocks in game 4 alone and finished with 15 1/2 in all.

"That made things very difficult for our attackers," Iolani coach Jordan Inafuku said. "There's a big difference from when we're on the net and we're five feet off the net. It may look like good passes, but a lot of what we do requires us to be on the net. They served really well and once we're off the net they have a very, very good block."

While Punahou was playing its fourth match in six days, Iolani was coming off a pair of sweeps after a first-round bye Monday. Fatigue was surely a factor Saturday, but at that point it was mind over matter, Deuchar said.

"I was definitely tired after last night; I got a lot of swings. My legs were tight, but I think it was just the adrenaline and the crowd, it just — I couldn't even feel it — it didn't even matter," said the 6-foot-7 junior and USC-commit.

One player with fresh legs against the Raiders was Kim, a reserve setter who had seen limited court time behind starters McInerny and Au Yuen in the Buffanblu's two-setter rotation.

Kim was inserted in the lineup midway through game 3 and had an immediate impact. He served four straight points — including an ace — to help turn a 16-14 deficit into an 18-16 lead.

"That was unbelievable," Deuchar said. "That's one of the toughest things to do. To not be a starter all season long and come in in the state championship game and play amazing — he had a few aces, he had some great sets, great digs — it was just unreal."

Tune said the move to Kim — and consequently sit Au Yuen — is not indicative of the latter's ability, but rather a case of freshman nerves.

"You know, Keegan did a great job, he's been doing a great job for us all season long. I just thought at the end of that second set the lights got a little bright and he got a little bit flustered, which is normal, I mean, the kid is a freshman. I mean, he's in the state championship match as a freshman as a setter," Tune said.

Au Yuen is just the third freshman starting setter over the course of Tune's tenure, which now includes 10 state championships.

"Micah Maa and Riley McKibbin. Those are the other two," Tune said.

Maa, who graduated in 2015 before going on to UCLA, was named an AVCA First-Team All-American last week. McKibbin, a 2007 graduate, was a three-year starting setter at USC before going on to play professionally in both the indoor and beach games.

"So that tells you how much I think of (Kim), but he was just a little bit wobbly — and he knew it — but you know what, what I love about Keegan is he was the first guy to support Jackson when he came in and Jackson came in and did a great job and Jackson's lesson throughout the season was that he had to learn to play in those big-pressure moments. I mean, we've been talking about that since tryouts, so what you just saw was a culmination of a long journey for Jackson, so a lot of good life lessons both individually and as a team. I'm just really proud of so many of these guys," Tune said.

Deuchar credited both Kim for stepping up when his number was called, as well as Au Yuen for handling the lineup change in the best way possible.

"It really shows our team culture. I mean, we really support each other no matter what. We had to work on that throughout the season, but I think towards the end we've really grown close together no matter what," Deuchar said. "It doesn't matter if the guy takes you out, whatever."

Across the net, the Raiders also held their heads high after a highly-successful season that saw them reach the state final for the first time since 2008.

"It's probably the most awesome job that I've been a part of," said Inafuku, who just completed his third year leading the program. "They got absolutely everything that they could possibly get out of themselves and I mean, to get to the state championship was very difficult, to get to this stage was very difficult and all of the things that they did, they should just be so proud. We're all very proud of them and they had so much support and they carried good feelings around the school for a long time."

SL reporter Kalani Takase touches upon a few players to keep an eye on during the 2020 football season.