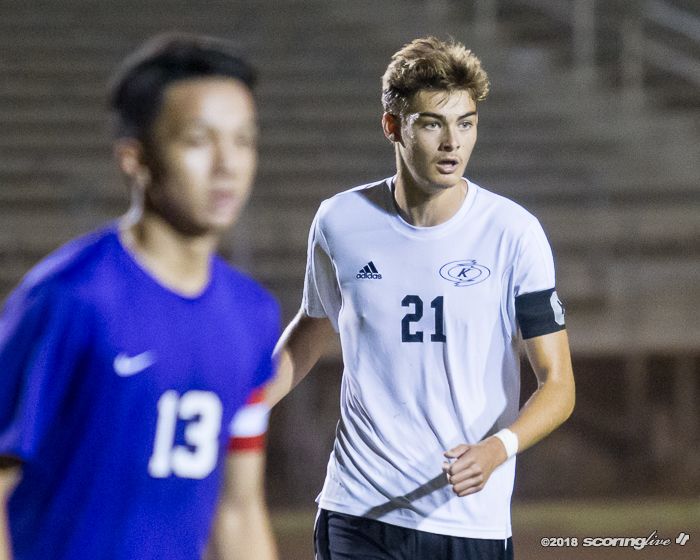 Kapolei's Sam Wren (21) moves without the ball in the first half against Pearl City Friday night. Michael Lasquero | SL 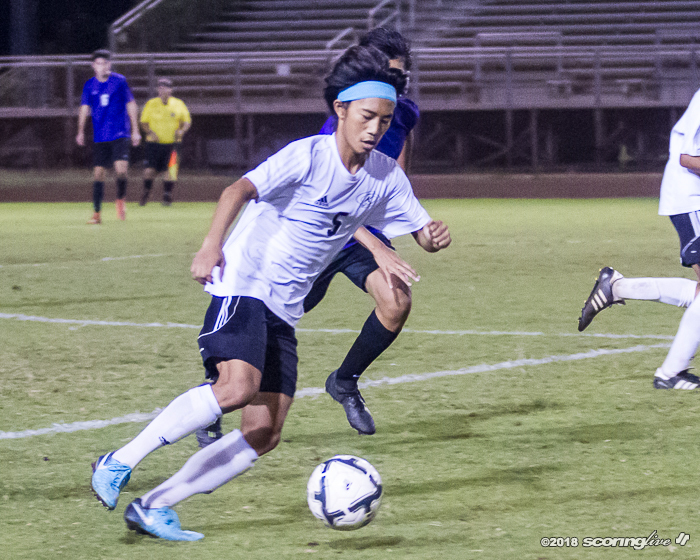 The duo of Sam Wren and Kieran Raquedan didn't score any of Kapolei's four goals in Friday's pivotal win over Pearl City, but to be sure, the junior midfielders were key contributors to the result.

The victory was the fourth straight for the Hurricanes, who improved to 7-1 on the season, and the first time the Chargers (6-2) allowed a goal in six games.

Since his return from an injury that forced him to miss the first five games of the Oahu Interscholastic Association season, Wren has been a galvanizing force in the middle third of the pitch.

Wren drew lots of attention from Pearl City, which helped free up his teammates Thomas Mascaro-Keahi and Sean Yoshida to net a couple of goals each Friday.

"Sam really does impact out of the center," Mascaro-Keahi said. "With Sam, he knows how to move the ball, he keeps us all motivated and stuck together. He's the glue. He's more of the guy you want to go through. He's the one that lets you know where you need to be and he kind of just gives us the power that we need."

Wren's improved health, along with the steady play of Raquedan — who was crucial to halting several Pearl City counterattacks — has solidified the midfield for the ‘Canes.

"You can see a big difference in the team now. We're a little bit more attentive to the details and having Sam and Kieran back tighter has been a big reason for that," Kapolei co-coach Ryan Lau said.

Wren and Raquedan are club teammates in the high school offseason, which only helps their on-field communication, Lau said.

"They play year-round together and you can see that connection between them. They both have high soccer IQ and awareness on the field and they're very composed on the ball. They're good two-way players and they just offer so much in the middle that they give teams so much trouble, and with that it helps so much because we can have a guy like a Sean Yoshida, or an Eric Aquino and a Tommy Mascaro, we can keep them high knowing that our central midfield is well taken care of."

Mascaro-Keahi has emerged as the team's second leading scorer behind Yoshida with six goals on the season, four of them coming in Kapolei's last three games.

"Tommy is a sophomore and he's a good, young player," Lau said. "He has a lot of offensive traits that you can't teach: he has a good awareness and sense of where to be, he has a good first touch and he can be dynamic."

While the midfield has turned in some solid play as of late, the back line has gotten the job done all season. All seven of the Hurricanes' wins this season have come by shut out. In fact, they have surrendered only one goal on defense this year.

Outside backs Noah Kolona and Cypress Navarro-Acio, along with center backs Andrew Ines and Branden Wong were the main defenders Friday. Wong, a First Team All-Hawaii selection last year, is among the elite fullbacks in the state, while senior Jason Catron brings a wealth of experience between the posts.

Catron posted a huge save in the 25th minute against the Chargers — just about eight minutes after the Hurricanes took the lead. He denied a solid shot on goal from about 25 yards out by Justice Gomes, whom Lau identified in the days leading up to the match as a dangerous left-footed weapon for Pearl City.

"Usually in the first five minutes after a goal is when you can become vulnerable and he made a big save. The timing of that was big," Lau said.

Catron, a third-year starter in goal, said he was set on keeping the Chargers and their prolific offense at bay after falling behind 1-0 the last time the teams met.

"That was very important," Catron said. "We trained everyday for this game and I think we executed well what our coaches were telling us throughout the week. We know that we're not the kind of team to play down first. We can't let it go in and we just executed today."

While the Hurricanes, who are ranked sixth in the latest ScoringLive/Hawaiian Electric Boys Soccer Power Rankings, largely returned the same personnel from last year's OIA championship-winning team, it took some time to fine-tune the production.

Lau said a 2-1 loss to Mililani on Dec. 19 — the lone blemish on Kapolei's record — proved to be the turning point.

"I think that loss was good for us. On this team we've got six guys that started two years ago for us in the state final and then we've got eight guys that started on last year's OIA championship team, so we only lost three guys, and I think what comes with that is sometimes because you've been successful and the expectations are high, you kind of start looking down the road and visualizing a little bit too much," Lau said.

"What we did after that loss was talk about the process, that we can't skip steps and we've still got to take it day in and day out. Just because we've been there before and we have a lot of guys back, it doesn't mean anything if we don't put in the work."

With just two games remaining in the regular season, Kapolei appears primed for a deep postseason run once again. It currently sits in second place in the OIA Division I West standings and should that hold after this week, it will have a first-round bye in the league tournament.

"Honestly, we knew what we were capable of and we've been playing this well in the run of play, but we just weren't finishing, but the opportunities were very similar to (Friday)," said Lau, whose team put 14 of its 23 shots on goal against Pearl City.

The Hurricanes will visit Waipahu (3-4-1) Tuesday before hosting Nanakuli (0-8) Friday to wrap up Western Division play.

Hot start fueled Warriors to a win over the Golden Hawks in an HHSAA D2 tournament opener on Nov. 8,...

Driven by its defense, Kauai nearly won it all in 2013

The Red Raiders won their first 10 games of the season en route to an appearance in the D2 state final.