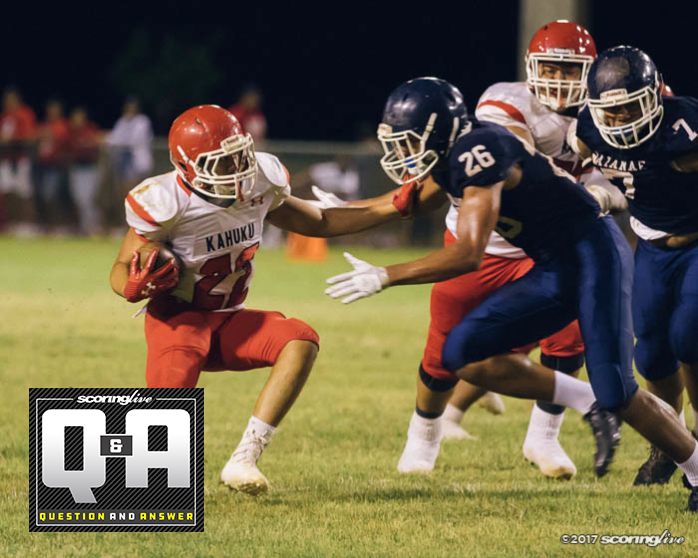 Nearly three months ago, two of the state's regal prep football programs faced off in an early-season duel in what played out as a one-sided blowout.

Fast forward to the present and the paths of the Kahuku and Waianae football teams will cross once more, this time in the semifinals of the First Hawaiian Bank/HHSAA Division I-Open State Fotball Championships.

The Red Raiders (10-1), No. 2 in the ScoringLive/Hawaiian Electric Power Rankings, are coming off a thrilling 35-31 win over third-ranked Mililani in last week's Oahu Interscholastic Association title game. It was their third consecutive league crown and 26th overall.

The sixth-ranked Seariders (7-4) rallied to a 29-21 overtime win over No. 7 Campbell in the OIA third-place game to claim the league's final spot in the four-team state tournament

Kahuku cruised to a 37-0 road win over Waianae back on Aug. 18 behind two passing touchdowns from quarterback Sol-Jay Maiava and a pair of rushing scores by running back Enoch Nawahine.

The Seariders were limited to a mere 16 yards of total offense in the loss, but played without starting quarterback Justin Tacgere (injury), which forced star running back Rico Rosario into quarterbacking duties.

Red Raiders first-year coach Makoa Freitas took some time to chat about his team as well as the Seariders.

ScoringLive: Your team required a fourth-quarter rally and late score to win last week. Does that give you some momentum going into this Friday?
Freitas:

"I think it does, but I also think that our players are still ready mentally to play and avoid the falloff."

ScoringLive: Which game this season, win or loss, was most beneficial for your team?
Freitas:
"I think it was our Bingham game. They kind of showed us where we we're at on a national scale. It showed us what we need to work on and then it was a good lesson for our players, and I think we used those lessons to help us in the Mililani game as well."

ScoringLive: Who has been an under-the-radar performer for your team?
Freitas:
"I would say Samson Siilata. Most of the guys know about Samson Reed, one of our d-linemen, but Samson Sillata is also a D1 guy. He has size, he has athleticism, he has the work ethic to make it to the next level, he's a great leader and he does a lot of stuff that people don't really see. He'll take on a double team to free up somebody else, he'll get pressure to make the quarterback step up and allow someone else to get a sack, so he does a lot of stuff. I think he'd be a great fit at UH."

ScoringLive: What are your thoughts on this week's opponent?
Freitas:
"They're a good team. Every year Waianae is always in contention and you can't take them lightly. They have a lot of pride and they're going to show up ready to play and they're going to be physical."

ScoringLive: What did you learn about your team from the first meeting?
Freitas:
"For us, I think it was the second game of the season that we played them. We had just played Leilehua and the first time we played Waianae I wanted to see how our team would respond to playing a physical opponent, how they would respond to a pounding, and I wanted to see how we would do. I think in that first game we responded pretty well."

ScoringLive: What will be the key matchup in Friday's game?
Freitas:
"Offensively, we have to stop the run and defensively, we need to control the line of scrimmage and always be aware of where (linebacker) Kanai Mauga is."

Kahuku is seeking its third straight appearance in a state final, while Waianae is trying to return to the championship game for the first time since 2010, when it lost to Saint Louis, 36-13.

Waianae coach Walter Young did not respond to multiple requests for comment.

Kickoff Friday between the Seariders and Red Raiders is scheduled for 4:30 p.m. at HawaiianTel FCU Field at Aloha Stadium.

The game will be followed by the other D1-Open semifinal between No. 3 Mililani (10-1) and top-ranked Saint Louis (8-0).