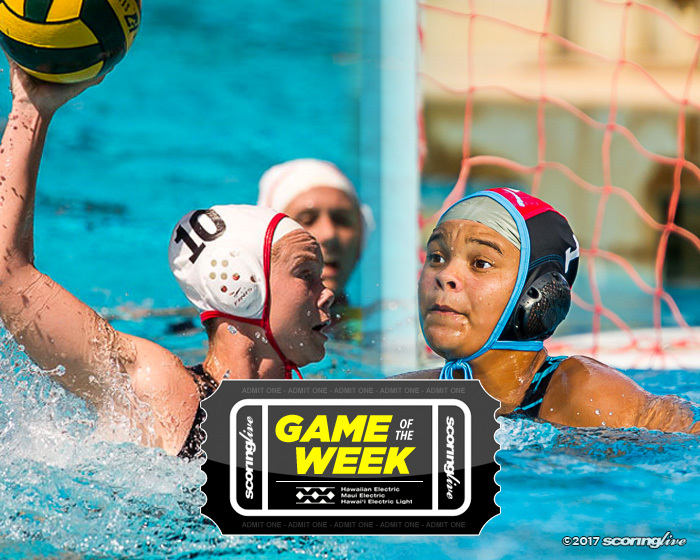 Kahuku will put its undefeated record on the line when its faces one-loss Kapolei in the first game of an OIA tripleheader Saturday at the Veterans Memorial Aquatics Center in Central Oahu. ScoringLive photo illustration

The road to the Oahu Interscholastic Association girls water polo championship has almost exclusively gone through Kahuku in the 14 years that the league has sanctioned the sport.

The Red Raiders have 13 OIA titles to their name in program history and once again are a heavy favorite to take another league crown back to the north shore this season.

Kahuku (8-0) will face its toughest test to date Saturday afternoon, in the form of Kapolei (8-1), which is riding a three-match win streak into the 2 p.m. showdown at the Veterans Memorial Aquatics Center at Patsy T. Mink Central Oahu Regional Park.

"Kahuku is always the top dog in the OIA usually and that's based off of them always having good speed for counter attacks, great press defense which frustrates other teams and leads to those counter attack goals and they have a really deep bench.

Through their first eight games of the season, the Red Raiders have scored a total of 148 goals (18.5 per game) and allowed just 19 (2.4 per game). They have scored double-digit goals in every game and posted a season-high 28 goals in a win over McKinley two weeks ago.

Kapolei features the state's leading scorer in Mailani Wendt, who has found the back of the net 43 times this season. She has scored at least three goals in every game and as many as seven on two separate occasions, including the Hurricanes' 14-8 win over Leilehua last Saturday.

"She has speed for counter attack goals, she plays great press defense and she's able to steal the ball for counter attack goals," Hagi said. "She also just has good mechanics for shooting and she's able to leg up, turn her shoulders and follow through on her shots. She has very good placement and has great speed on her shots."

"Our four seniors this year are all great leaders. They lead by example. We have them lead all of our drills and plays and they're good at explaining to our new kids," Hagi said.

The foursome got their first exposure to the Hurricanes' program as eighth graders and over the years have become invaluable assets to the team.

"They've come a long way. Our upperclassmen have more leadership qualities now, but there's always room for improvement and we always tell them that," Hagi said.

Hagi said that she expects Slattery, Goeas and Wendt to have to play all 32 minutes Saturday to match up with the Red Raiders' defensive pressure.

"I think if we can stop their counter attacks and have clean passing and capitalize on our opportunities we will be able to complete with Kahuku," Hagi said.