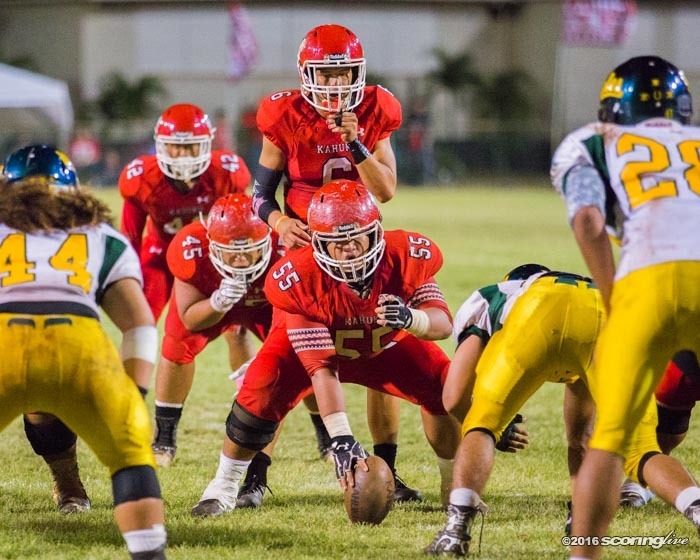 The Red Raiders line up in an I-Formation set on offense against Leilehua in a OIA Division I quarterfinal game last Friday. CJ Caraang | SL

The elephant in the room — or the North Shore to be exact — is evolving.

The mammoth-like, wildcat offense that Kahuku rode all the way to its 24th Oahu Interscholastic Association title and eight state championship a year ago was no where to be seen in the Red Raiders' latest victory.

As effective as the formation was against opposing defenses, it was based purely on brute strength. Pound the rock and run it down the other team's throat. If you can't stop it, too bad.

Last Friday was a different story. The Red Raiders utilized personnel needed for a pro-style offense to great success as they racked up 427 yards of total offense and never punted in their 63-0 quarterfinal win over visiting Leilehua.

Unlike the spread offense, which is gaining in popularity across the country, Kahuku had a fullback, a tight end and an X and Z receiver, also known as a split end and a flanker. The personnel gave the Red Raiders a more balanced approach as they were able to take advantage of what the defense was giving them.

"We're just trying to use all of our sources and bring out all of the formations that we've been practicing for the past few weeks," said running back Elvis Vakapuna.

The mentality on offense is still to ground-and-pound, but the Red Raiders can go to a multitude of ball carriers, a luxury that most teams across the state don't have. Nine players ran the ball against the Mules, but no one totaled more than seven carries. The end result was rushing touchdowns by six different players and 278 total yards on the ground.

The Red Raiders even had a shotgun set in the mix, but still utilized the same personnel that the standard I-formation set calls for.

"We're just trying to spread out the field a little bit more and give our backs more room to run," said Lombard. "Hopefully we can continue to improve."

While a strong running game by Kahuku is almost a given, many question if the Red Raiders can pass if they need to. Against the Mules, the potential is there, but it's still a work in progress.

The strongest aspect about Kahuku's passing game is its tight ends. Pua Falemalu and Sekope Latu found big gains crossing across the field on play-action passes and combined for four receptions for 85 yards and a score, great numbers for a small sample size.

Freshman quarterback Sol-Jay Maiava spoke highly of Falemalu and Latu after the game.

"My tight ends, they're really big targets and easy to hit," he said. "They get a pretty good read off of me and what I do."

The throws to the outside receivers were a different story. Royce Pao and Sitaleki Tongi, who stand at 5-foot-7 and 5-foot-8 respectively, combined for just three receptions for 34 yards. The route running and ability to get open is there, but the timing and hand skills aren't quite there yet. Maiava would either over throw his outside receivers, or they would end up dropping his passes, one of which was tipped on a slant pattern and recycled into an interception.

It remains to be seen if the connection to the outside receivers can be established before the Red Raiders start playing the elite teams in the state, but the seed is definitely planted. If it's any consolation, Kahuku could just sub in cornerbacks Stokes Nihipali-Botelho and Kekaula Kaniho on offense if it really needed to.

Maiava, who already has an offer from the University of Michigan, may be young, but he definitely is talented. He was able to keep several plays alive with his feet and even scored on a triple-option keeper around right end.

"He's just an athlete all-around," Lombard said of Maiava. "If I don't get the ball and I suck up the defense, then I know he'll make a play and take it up field."

The option plays that the Red Raiders used against Leilehua was something that the offense has been fine-tuning for the past couple of weeks, Lombard said.

"We've had it in our back pocket for a while. We're just now getting it into our own offense. Hopefully we'll see more if it in the playoffs."

Kahuku continues its postseason run when it takes on Waianae Saturday night in the first semifinal at Hawaiian Tel Federal Credit Union Field at Aloha Stadium.

The sophomore quarterback threw for 234 yards and seven touchdowns on a perfect 16-for-16 passing in...