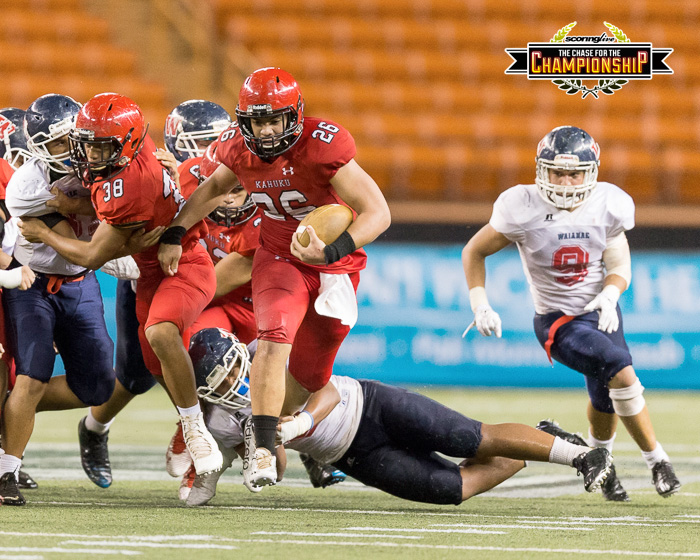 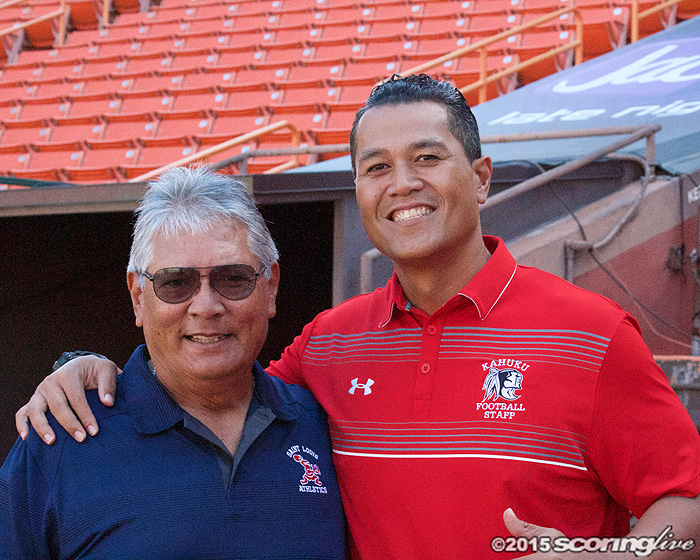 Kahuku first-year coach Vavae Tata will face his former coach Cal Lee when the Red Raiders take on the Crusaders in the Division I championship game. Michael Lasquero | SL

More than once in his life, Vavae Tata ran out one of the Aloha Stadium locker room tunnels with his then-coach Cal Lee.

Friday night, each will exit opposite tunnels as peers.

Tata, who played for Lee on Saint Louis' perennial Prep Bowl title teams – including in 1993 when the Crusaders beat Kahuku – will lead the Red Raiders out of one tunnel to play for the 17th First Hawaiian Bank Division I state football championship at Hawaiian Airlines Field at Aloha Stadium. Kickoff is 7:30 p.m.

"It's awesome," Tata said of coaching against his former coach. "A week ago I said it's going to be quite an experience. I keep hearing teacher versus student."

To Tata, it's not about him or his former coach.

Tata, the third Kahuku coach in as many seasons, will try to bring the most successful Division I state tournament team its eighth crown, by far the most of any other team. The closest team in D1 state titles is Saint Louis with three.

As a player for the Crusaders – a two-time All-State defensive lineman – Tata recalled as Saint Louis was about to leave the tunnel for the field, the players knew they were going to win. It was because they were prepared.

Kahuku (12-0) will be as prepared as it can be against Saint Louis (9-1). The Red Raiders are seeking their first championship since 2012, which by North Shore standards is two years too long.

Offensively, Kahuku pretty much tells the opponent what's coming. The only question is if it can stop it.

For the most part, Kahuku will come out in a double tight-end formation with two halfbacks just behind the line and in front of the wildcat, usually Kesi Ah-Hoy, with Harmon Brown spotting him in the role. The 6-foot, 215-pound Ah-Hoy, a junior, combines power and speed, as he rolled up a team-leading 1,170 yards rushing and 15 touchdowns.

On rare occasions, the ground game gets stalled, as it did against Waianae in last week's 13-0 win in the semifinals. Tata was well prepared for that, bringing in seldom-used Cameron Renaud, a true quarterback. Statistically, what he did seemed pedestrian, complete 2 of 6 passes for 49 yards, forcing the Seariders to play honest. From Kahuku's 46, Renaud's first pass was for 34 yards – the longest play of the game, including Keala Santiago's 32-yard interception return – to Kaula Kaniho, a starting defensive back. Two plays later, he completed a 15-yard pass to Royce Pao, a wide receiver, to give Kahuku the ball at the Waianae 5. The series ended with a 22-yard field goal by Kekoa Sasaoka just before the half to break the scoreless deadlock. It was the boost Kahuku needed, as the defense took over the rest of the game and the offense reverted back to the wildcat.

"We're just going to give and take," Tata said of Renaud's usage against Saint Louis. "We're going to see what the defense gives us, we're going to try and adjust. If they put eight, nine in the box because they're worried about the run, we'll flip the script on it, we'll throw our passing game. But this is for all the marbles. We're going to stick to what we do. Our DNA is, obviously, ground and pound offense, establish the ground game so we can open the passing game."

Defensively, it does not get any easier for opponents. Kahuku has shut out half its opponents and only once allowed double-digit scoring (56-10 win against Kapolei). The Red Raiders have allowed a measly 125.6 yards per game.

"We just have to do our assignments because he can hurt you not only with legs, but he can hurt you with his arm," Tata said of Tagovailoa. "He's a versatile player. We're looking forward to the challenge."

The Red Raiders have tight secondary with Kaniho, Stokes Botelho, Joseph Purcell and Louis Keala Santiago, a third-generation all-star (all by the same name) has six interceptions in postseason, including the TD against Waianae.

Kahuku's special teams cannot be overlooked. Kaniho, Botelho and Santiago share the return duties and all are dangerous. Kicker/punter Sasaoka can put opponents deep in their territory and kicks field goals consistently well.

The 2011 Punahou graduate is in his second season leading the Missouri Tigers women's volleyball program.

Kaimuki won three games by a single point that season, including a 14-13 victory over Pearl City in the...

Fontes nears end of long road back from ACL tear

The 2019 Pearl City graduate hopes to make her collegiate debut for the UCLA Bruins in February.