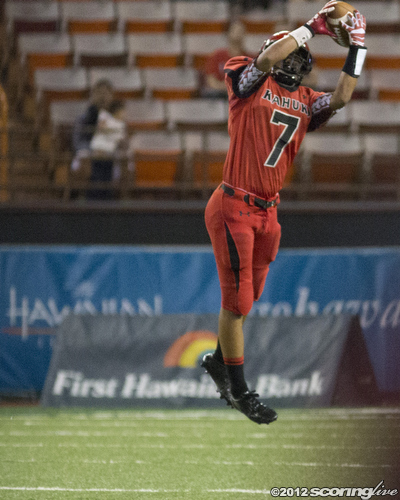 As he had done all season long for the Kahuku Red Raiders, Kawehena Johnson made his presence felt on both sides of the ball once again, this time on the state's biggest stage, playing for the HHSAA Division I football championship.

The senior defensive back/quarterback/wide receiver was all over the place against the Buffanblu defensively, recording three tackles and two interceptions. He also was instrumental in limiting Punahou's top receiving threat, sophomore Kanawai Noa, to just 6 catches for 82 yards and no scores.

"Coach has been telling us about number 9 (Punahou's Noa), get over the top of number 9." said Johnson. "I just listen to what the coaches tell me and came out on top."

He also made an impact on offense, adding 5 rushes for 30 yards, and scoring on from 53 yards out on a lateral following an 11 yard completion to Will Cravens from Lasi Livai.

Kawe did make the catch and raced past the Punahou secondary along the left sideline for the touchdown with just seconds left before halftime to stretch the lead to 21-0.

"They all did their job, so I came out successful. Well, we all did." said Johnson.

When asked about his reaction to the win, Kawe paused, then looked briefly in the direction of his teammates.

"Just look at them, they celebrating. It just puts a smile on my face that's my reaction," said a beaming Johnson.

Lahainaluna QB Makoa Filikitonga Lukela, Jr. rushed for 103 yards and 2 TDs and passed for 77 yards and another score against Iolani.

Iolani WR Chad Hanaoka had 6 receptions for 50 yards and 3 TDs against Lahainaluna.

Kahuku DB/WR Kawehena Johnson recorded 3 tackles and 2 interceptions, rushed for 30 yards, and ran a lateral 53 yards for a TD against Punahou.

Iolani WR Tanner Nishioka had 8 receptions for 134 yards and 2 TDs against Lahainaluna.

Kahuku DB/WR Lasselle Thompson recorded 6 tackles and an interception and added 2 receptions for 49 yards and a TD.