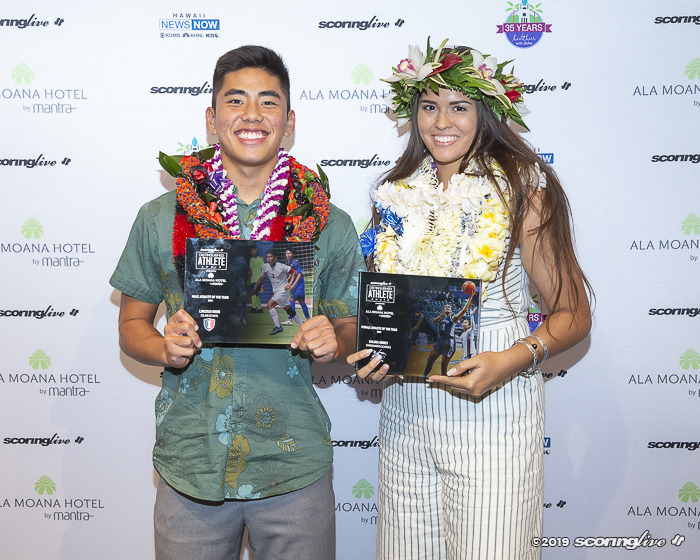 The pair were honored as ScoringLive's Distinguished Athlete Award winners at the annual dinner banquet held on June 9 at the Ala Moana Hotel. The award is given annually to the top overall athlete in a single sport during the past school year.

Kamehameha's Pua Straight, who was also among those honored at the banquet as the reigning All-Hawaii girls basketball Coach of the Year, reflected upon Obrey's prolific season season.

"I think it's obvious that she had an amazing year," Straight said. "It's interesting because I coached the JV for five to six years, but she skipped me at JV, so before I coached her I always just watched her during the (varsity) game and I mean, she was always very dominant in the post, but it wasn't until I actually got to coach her that I got to realize how much she pushes others around her and how smart she is. She saw the court so much better than I had realized her freshman to junior year years."

Obrey's court sense wasn't the only thing that impressed Straight early on.

"In those first practices we had the summer before last year, I noticed that her perimeter game is a lot stronger than I had thought. That's something she worked on and all of those things were huge, but her leadership I would say is probably her biggest thing," Straight said of Obrey, who averaged a state-best 19 points per game.

"She pretty much averaged a double-double, but the biggest thing we'll miss and have to have other girls step up with (next year) is that leadership role. She's so confident that I feel any girl on our team could just look to her and gain confidence," Straight said. "I think she had a successful year because she's a smart player and she worked hard to be able to do it all — back to the basket, being able to face up, pass, bring the ball up court — she worked really hard to develop all of those skills."

The development of those skills was a process, to be sure. Obrey's work ethic was evident not only in games, but also in daily practices.

"She's probably one of the most competitive players that I've ever seen play, whether I played with them or coached them. She brought that to our practices and just that high level of competition — we just started summer practices — and I can see that legacy carrying on in these girls and I know that they learned that competitiveness from her; that's definitely one of the biggest things that she brought to our team," Straight said.

The 5-foot-10 forward/center set a state tournament, single-game record with 38 points to go along with 17 rebounds in a semifinal win over Kalani. Obrey led the Warriors to an 18-7 overall record and their first state finals appearance in six seasons. She was selected as league MVP by the Interscholastic League of Honolulu and Hawaii State Player of the Year by Gatorade.

"I think I definitely left a legacy that I will be proud of, that my family is going to be proud of and when I look back at it hopefully I can share with my kids, my grandkids that they know that their mom or their grandma accomplished all that and did it and that it's not easy, but anyone can do it if you put in the hard work and if you just put your mind to it," said Obrey, who will play for San Jose State University next year.

Straight said that while her team will certainly miss the on-the-court production of the three-time first team all-ILH selection, Obrey's overall impact on the program is sure to be a lasting one.

"Sometimes I would have my girls do little assignments in their notebook and one of the things she wrote in her notebook — I think it was one of the very last things she wrote — was something along the lines of, ‘if I believe I can pass along my passion and heart to my teammates, nothing can stop them next year,' " Straight said. "She's such an amazing leader. She gained the respect of all of her teammates because she works harder than everyone else and because she cares about the team. It takes 30 seconds to realize she really was the heart of our team and she was able to pass along that heart and that passion and that's a huge reason why we made it to where we did."

Oishi's value to the Iolani boys soccer team last season was very much in line with Obrey's to the Warriors.

The center-back and captain helped the Raiders steadily improve over the course of the season while serving as the last line of defense in front of a freshman goalkeeper. Oishi was pivotal in Iolani's nine shutout wins, but he saved his best for the state tournament, when he scored five goals in three games.

"The thing about Lincoln is he's a leader by example and you saw it in the state tournament," Iolani coach Chris Lee said of Oishi. "To me, he was a big inspiration for his teammates with his never-say-die attitude and for him to do what he did in that state tournament — to score five out of our eight goals in the tournament coming from the back, where those guys don't usually score that many goals — but he wasn't the only reason (for our success) and he knows that and that's the reason he's receiving an award like this, because of his teammates, but he's humble in that way and he's most definitely a team player."

Among those who previously spoke positively about Oishi's sportsmanship was Punahou coach David Trifonovitch — despite some heated battles between the Buffanblu and Raiders over the years.

"He's a player that just plays hard and gives it his all every time he steps on the field. He's not dirty about the way he plays, he just plays real hard and I think that's what opponents and other coaches recognize him for, is that he can play that hard and be that competitive and still be a good sport on the field," said Lee, who has coached at Iolani for 27 seasons, the last 14 as head coach.

Despite suffering a fractured hand early in the state title match, Oishi returned to the pitch for the rest of a hard-fought overtime loss to Punahou. He earned all-ILH first team honors for a second straight season and led Iolani to a 13-3-1 record and its first state finals appearance since 2014.

"Lincoln is a guy that was a leader that was able to bring together all of his teammates and sometimes he was the only guy that people would look up to," Lee said. "The guy trains through broken wrists and he broke his finger in they state final game. He's just a really, really tough player, but a very good family-oriented kid off the field."

Unlike Obrey, however, Oishi wasn't always playing on the top team at his school. In fact, he was cut from varsity tryouts as a freshman.

"It's very humbling because ever since I came up from the ninth grade and even before that when I played intermediate, I mean, I didn't make the best (intermediate) team when I was in the seventh grade, so it just teaches you hard work, to keep at it," Oishi said. "Eventually I made that black team and then after ninth grade I made it (to varsity) my sophomore year, so it just shows you that you can do anything with the right amount of work and effort and good support behind your back."

Lee talked about Oishi's intestinal fortitude and willingness to work for what he wanted.

"I think the thing about Lincoln is his mental toughness and his competitiveness, I think those are the things that stand out to me — a guy willing to work hard and improve each season. He didn't make it his freshman year and didn't get discouraged by it and just came out and every year that he's been with us has gotten progressively better and better and he got recognized every year with higher accolades because of his work ethic," Lee said.

Oishi will continue his playing career at Whitworth University (Spokane, Washington) next year. He reflected upon his time at Iolani with modesty.

"I don't know if I'll leave behind a legacy, but I hope that people from Iolani won't remember me from how I played or my talent, but my leadership and I impacted the team and, you know, the idea that winning isn't everything," Oishi said. "After the season I felt very humbled. Even though we didn't win, I felt like I got something greater, because me and my teammates grew as brothers and I've got 30 new friends, so I hope I leave that behind."

Although boys soccer and girls basketball run concurrently as winter season sports, Lee did say that he was able to catch a few of Obrey's games that were televised and couldn't help but notice a commonality with Oishi.

"I did see her play and in a sense, you look at the two athletes and they're just clutch players; You know you can count on them to give it their all to the very end," Lee said.

For both Obrey and Oishi, their individual hard work most certainly paid off and in addition to their respective programs and teammates, it was all of us prep sports fans who were treated to the fruits of their labor.