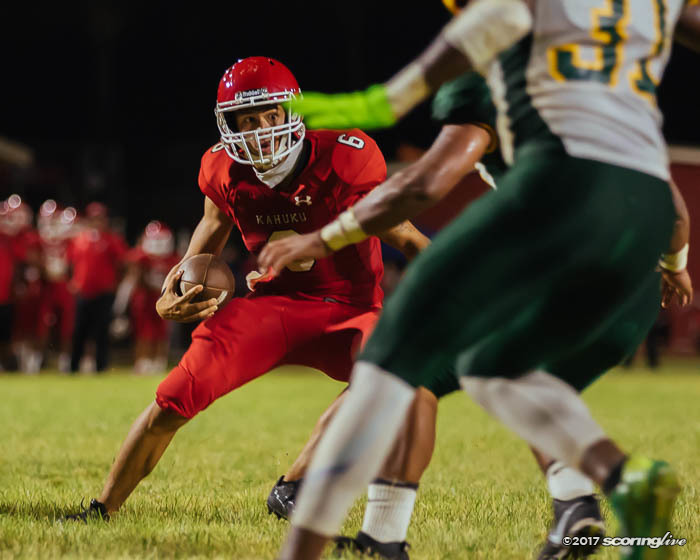 Kahuku quarterback Sol-Jay Maiava (left) status is up in the air for Saturday's game in Las Vegas after sustaining an apparent non-throwing shoulder injury against Aiea. CJ Caraang | SL

It will be a battle of No. 1 teams from their respective states when Kahuku takes on defending Utah 5A state champion Bingham on Saturday, 5 p.m. Hawaii time in the nightcap of the inaugural Polynesian Football Classic at Sam Boyd Stadium in Las Vegas, home of the University of Nevada Las Vegas Rebels football team.

But the Red Raiders are awaiting a diagnosis of an apparent (non-throwing) shoulder injury to right-handed quarterback Sol-Jay Maiava from the Aiea game.

Thorton Alapa finished the game at QB with a statline of 3-for-12 passing for 99 yards, two touchdowns and one interception. Kahuku coach Makoa Freitas said Maiava will still make the trip even if he is unable to play. Alapa would be the starter if Maiava can't play.

Bingham (South Jordan, Utah) is 3-0 and competing in 6A this season. The Miners are ranked No. 1 in Utah by the Deseret News and Salt Lake Tribune.

Kahuku, No. 1 in the Hawaiian Electric/ScoringLive Division I Football Power Rankings, is 4-0 and coming off a 51-7 win against Aiea.

The defending OIA D1 champs are also ranked No. 23 in the latest MaxPreps Xcellent 25 High School Football rankings with the Miners taking the No. 16 spot.

In the first game of the Classic, Alta (Sandy, Utah) will play Liberty (Henderson, Nevada). A concert by musician Fiji is scheduled between games.