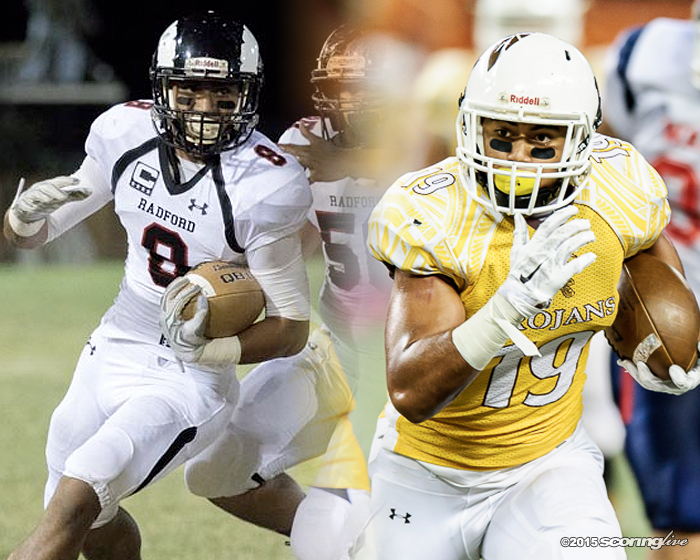 As predicted, Punahou and Saint Louis came down to the wire, but unfortunately didn't swing the way of either myself or the Buffanblu. I'll take solace in picking both Mililani and Kahuku, I suppose.

So in Week 12, Crystal ball-Ing ruminates on the winners in the upcoming OIA Division I and DIvision II title games. So let's get right to it...

There might not be a hotter team in all of Division II football than the Bulldogs. Winners of six straight, including a miracle win over Nanakuli in the OIA Division II semifinals, Kaimuki has averaged 29 points a game while allowing just 16 during the streak. At 6 foot, 2 inches, running back Billy Masima has been huge, literally, toting the rock for the Bulldogs. Since Sept. 12 against Pearl City, his first start at running back, the junior has carried the ball 95 times for 717 yards and three touchdowns, averaging a gaudy 7.5 yards per carry. Quarterback Keanu Pratt has been steady at the controls of the offense (nine touchdowns to just two interceptions over his last five games) and all-purpose Andrew Neves is a home run-threat out wide (five receiving touchdowns, 19.3 yards per reception average).

Top-ranked and undefeated Radford has got to be the odds-on favorite to not only lay claim the OIA Division II throne, but win the state title as well. The Rams have coasted through the regular season, allowing just one team to score in double-digits all year (Pearl City, 14) while scoring an average of 40.4 points per outing. The backfield duo of Ace Faumui and Kodi Ongory-Mathias has racked up 1802 rushing yards and 26 scores, and all-purpose Blaise Manabe leads the team in receiving (311 yards, six touchdowns) and has two touchdowns on special teams to boot.

Radford has a stout defense to back up what is a weapon-rich offense that opponents have not found a way to keep out of the endzone this year. Kaimuki would be well served to play ball control via the power run game and hope to cash in on deep balls thrown out of play action on offense. The Bulldogs aren't particularly high-powered, cracking the 30-point mark this year just three times with a high of 34, while the Rams have only scored under 35 twice this year. Kaimuki has showed it is of state tournament caliber, but Radford just seems to be on a different level.

The battle between the high-octane Trojans and the smash-mouth Red Raiders for the OIA Division I title is anticipated to say the least. Much ado has been made about Kahuku's defense and deservedly so, but despite the insanely-low averages allowed across the board, the honest truth is that Mililani is ultimately the first true 'elite' opponent to face off against Big Red. As for Kahuku's offense, the ground-centric philosophy has found little resistance thus far, carving up opposing defenses for 267.6 yards per contest. The play of Kesi Ah-Hoy over the last three contests (527 rush yards, seven touchdowns) has been phenomenal, but as Kahuku showed against Farrington, it could be any number of guys behind center with equivalent success.

I don't expect for a minute that the defending champs will sway from their current game plan despite what Kahuku brings to the table, even with freshman Dillon Gabriel at the controls. Gabriel seemed to have gain some level of comfort throwing the ball against Waianae, and it certainly helps to have a bevy of talented pass catchers at one's disposal, in particular, Kalakaua Timoteo, who recorded eight grabs for 199 yards and two scores. A balanced attack could be the key to scaling the wall that is the Red Raiders' defense, and the Trojans will likely feed Vavae Malepeai early and often. The senior running back has logged no less than 15 carries in all but one game all year, and has 20-plus touches in three of his last four contests. He's broken the century mark in yardage in all but two contests, and cracked the 200-yard mark twice (both against Moanalua).

Will the Trojans become just the second team to score in double digits against the Red Raiders? I think so, and then some. WIll Kahuku match its 46 points per game average on the Mililani defense? I'm not sure they will match the season average, but into the 30s seems likely.

What will be the deciding factor? To me, it will come down to which team can dictate tempo.

If Mililani can build an early lead, find some success through the air, all the while sustaining drives through some semblance of balance to keep its defense as rested as possible, it will pay dividends down the stretch. The Trojans can, and likely will, score points on the Red Raiders' defense. The question is, can they make enough stops defensively? If the Trojans can hold a margin late, Malepeai hitting the 30-plus touch mark as his number gets called to close the game out seems like a recipe for a three-peat.

For Kahuku, I think its all about execution. Minimizing penalties, finishing off runs strong, ball security, and keeping both its defense fresh and the Mililani offense on the sidelines should all be keys to success. Big Red has never faced a deficit of any consequence this year, but I can certainly see that being the case come Friday. While there is no shortage of offensive talent for Kahuku, a comeback from say a three-score deficit in the latter stages might be a bit daunting. But should all hold to form as it has for Kahuku all year thus far, I could certainly make a case for a signature win, with scoring in the high 20s and just a single score for Mililani.

This time though, I see the unstoppable force ultimately moving the immoveable object. Not by much, mind you.