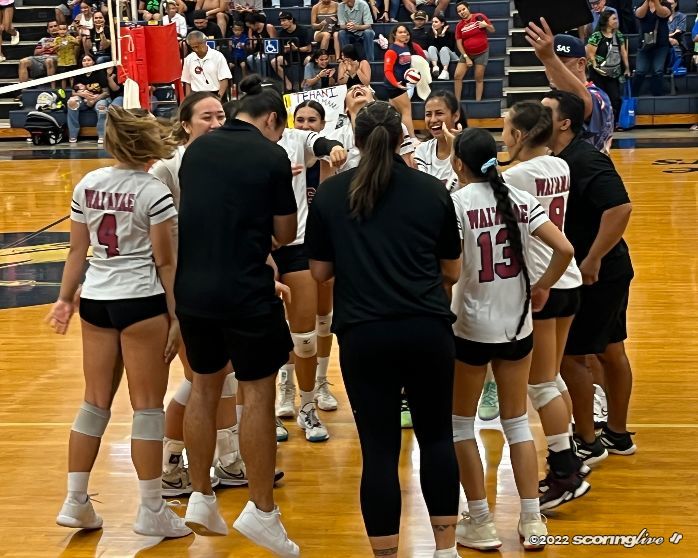 WAIANAE - Haiti Tautuaa, Larryn-Alexis Joseph-Rodriguez and Leleapaoo Krug combined for 34 kills and host Waianae stunned No. 10 Mililani, 27-25, 15-25, 25-16 and 25-21, Thursday night to pull into a share for first place in the Oahu Interscholastic Association West with the Trojans in girls' volleyball.

Kapolei (6-2), which beat Waianae, but lost to Mililani, lost to Leilehua (7-2) Thursday night. The Mules own sole possession of third place, while the Hurricanes dropped into a tie for fourth with Campbell (6-2) in a

crowded division where fives teams are separated by one game in the standings. The Kapolei loss puts Waianae in the driver's seat for the division's top seed. The Seariders need towin its final two regular season games

(at Radford on Oct. 4 and Leilehua on Oct. 6. The top two seeds of each division draw first-round byes in the OIA tournament.

Tautuaa led the Seariders with 13 kills, with Joseph-Rodriguez following with 10 and Krug adding 10.

Tautuaa, the sole setter last season, had seven assists, but now shares setting duties with sophomore Tehani Fa'asuamanu, who had 15 assists, in the Seariders' 6-2 formation.

In other crucial matches next week, Mililani has Campbell and Radford; while Kapolei has road games at Nanakuli and Campbell. Leilehua's only match is with Waianae. Campbell, winners of six in a row since starting 0-2, play Mililani and Kapolei.