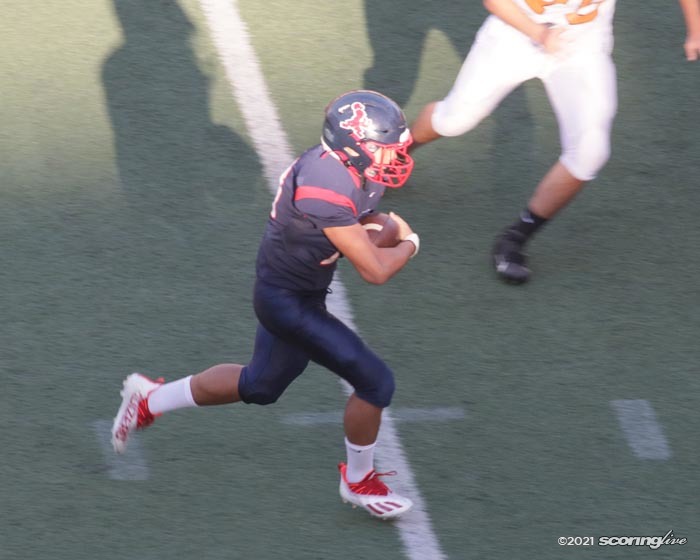 Chevas Gregory, Jr. had touchdown runs of 56 and 40 yards and finished with 182 rushing yards to lead the Crusaders. Greg Yamamoto | SL

HALAWA— Saint Louis II scored early and often to rout PAC-5, 48-22 in the first game of an Interscholastic League of Honolulu doubleheader at Aloha Stadium.

Chevas Gregory Jr. rushed for three scores and Jaron-Keawe Sagapolutele added four more in the air as the Crusaders put up 48 points again in their second-consecutive win to improve to 3-1 overall.

TJ Setik recorded two interceptions and his first pick set up a 17-yard touchdown pass from Sagapolutele to Kache Kaio.

Saint Louis poured it on as Gregory, Jr. punched in a 1-yard touchdown and following a PAC-5 punt, Sagapolutele threw a 32-yard touchdown pass to Diesel Pacheco. Gregory ripped off a 56-yard touchdown run and finished with 182 rushing yards on 15 attempts.

Kaio caught five passes for 147 yards and hauled in a 30-yard touchdown for a 35-0 first-half lead.

Joshua Arcayena scooped up Aizek Kaanoi's fumble and returned it 54 yards to the house and Rodrigues' two-point run brought PAC-5 within 21, 35-14.

Sagapolutele threw his final touchdown pass of the evening to Kaeo Apduhan to make it, 42-14 and finished with 309 yards on 18-of-22 passing and no picks.

Iwaki caught a team-high three passes for 163 yards and caught a 55-yard touchdown three minutes into the fourth quarter and Rodrigues completed a pass to Arcayena for two.

Gregory, Jr. scored on a 40-yard run for the game's final score.

Saint Louis II wraps up their season with a home game against Kamehameha II on Oct. 22. The Crusaders won the first matchup, 48-35 the previous week.

The Wolfpack end their ILH season with a 1-5 overall record.