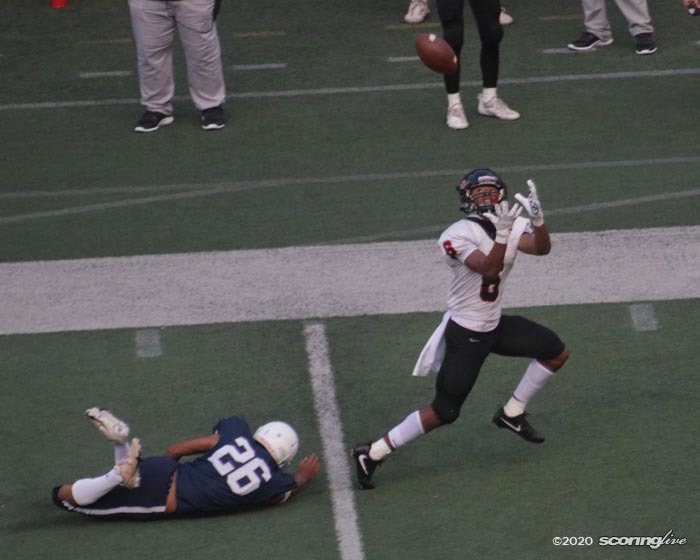 Kai Preusser hauls in a 67-yard touchdown from Micah Hoomanawanui that gave the Raiders a 21-14 lead in the second quarter. Greg Yamamoto | SL

HALAWA—No. 12 Iolani overcame a slow first half to defeat Kamehameha II, 35-20, in an Interscholastic League of Honolulu contest at Aloha Stadium Friday.

The Raiders improve to 3-0 overall while the Warriors (0-2 overall), who fell to Damien, 25-20 the previous week, drop their second-straight game against a Division I opponent.

Brody Bantolina has been averaging 7.0 yards per carry finished with 163 all-purpose yards—154 yards on 22 carries, three scores, and one catch for nine yards.

A bad snap to the punter gifted Iolani great field position and the Raiders cashed it in on Brody Bantolina's 21-yard touchdown run, to trail, 7-8.

Bantolina added his second rushing touchdown from 16 yards out to reclaim the lead for the Raiders, 13-8.

Noah Spencer scrambled on a fourth-and-6 and dove in for a 8-yard touchdown, but the pass failed as the Warriors took back the lead, 14-13.

Micah Hoomanawanui threw a 67-yard touchdown pass to Kai Preusser (139 all-purpose yards) and Preusser caught the two-point conversion from Hoomanawanui in traffic to put Iolani up, 21-14.

Kamehameha II prevented Iolani from scoring before the end of the half after Waiamau-Galindo forced the ball out of Hoomanawanui's hands and Palama recovered the fumble.

Nela Taliauli took a screen pass 38 yards to the end zone to pad the lead by two scores early in the fourth quarter. He went 9 of 24 for 156 passing yards.

Spencer launched a 58-yard touchdown pass to Ty Perkins, but the run failed as the Warriors trailed, 28-20. Spencer finished with 202 yards on 16-of-24 passing and Perkins caught five passes for 121 yards.

Bantolina rushed for his third touchdown of the night and Jacob Gaudi's interception on the ensuing Warriors' offensive drive put the game away.

Sakashita amassed 12 tackles, a sack and 2 1/2 tackle for losses, and Gaudi (4 1/2 tackles) had two interceptions to lead Iolani's defense.

Iolani is scheduled to take on PAC-5 in the nightcap of a double header on Sept. 17 following Damien and Saint Louis II. The Raiders won the first match up, 46-7 on Sept. 3. The Warriors have a bye and take on the Wolfpack on Sept. 24.