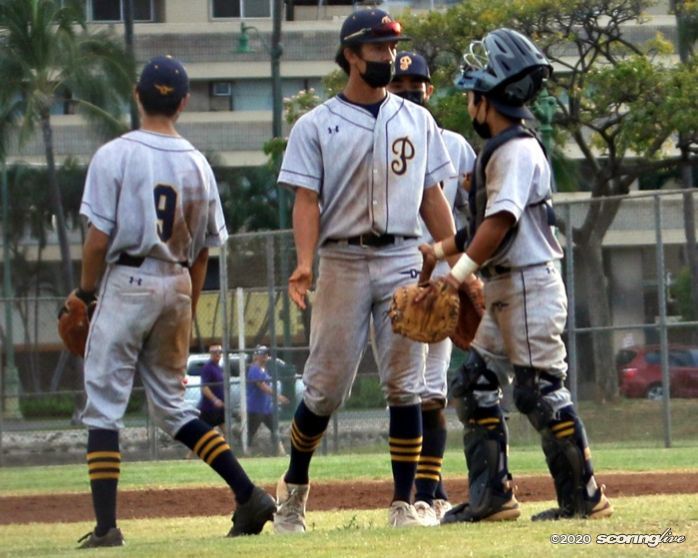 ALA WAI—Punahou jumped out to an early lead in the first inning and held off a Saint Louis rally to win, 6-4, to wrap up the Interscholastic League of Honolulu regular season at Ala Wai Community Park Tuesday afternoon.

The Buffanblu conclude the regular season with a three-game winning streak and improved to 4-2-1.

"It feels great. The team is playing great ball right now. Hats off to our pitching staff for keeping us in games all season. The bats are coming around now and the whole team is sticking to a great approach. We're seeing the outcome come the way we want it to. That's a really good sign," junior catcher Justin Tsukada said.

The single-elimination tournament starts on Saturday, May 8 with seeding to be determined.

"We have a saying in our program, ‘We're grateful for everything, and are entitled to nothing'. We are grateful we are out here. The boys still have to work hard. We are happy for the seniors, that they get some competition before they ride out into the sunset. Our boys have been conscience of trying to provide a good couple weeks for their buddies who are going to leave them. That's what it's about ultimately," Punahou coach Keenan Sue said.

"It gives us momentum and morale. We won the last three in a row. The bats are getting hot and the pitching is keeping us in games and doing their jobs. We're jelling at the right time," Tsukada said.

Tsukada drew a leadoff walk in the first inning and advanced to third on Nolan Souza's single. Kila Kaniho came in as a courtesy runner for Tsukada and Kikaha Nakamura brought him home with a hit to left field.

"It's huge," Tsukada said. "It's always great when we can get out their, especially as a visiting team to give our pitchers support. It helps them pound the zone, get guys out, and get ahead of the count. Good things happen when you're ahead of the count."

Jacob Ornellas (2 for 4) followed up with a pop fly to left and Patrick Munley brought in Souza and Ornellas with a crushing triple to centerfield for a 4-0 lead.

"Anytime you catch a lead early in the game, it sets the tone for the rest of the game. It gives the boys confidence. On the flip side, they (Saint Louis) stayed in the game and they came back it was a testament to their grit and resilience," Sue said.

The Crusaders made a pitching change in the second inning with Reo Goya taking the mound for Jacob Villacourte and got the first two outs before Kaikea Harrison drove in another run for a 5-0 Buffanblu lead.

"One thing we have been doing well is we've been making routine plays. That's all we can ask for the guys. They're making the plays they need to make. That keeps us in the game. We let them back in by walking a few guys. That never helps," Sue said.

Makamae Dupont reached on an error, Ryson Waalani drew a walk and Cody Antone singled to load the bases for Saint Louis. The Crusaders scored their first run of the game on Hunter Hirayama's sacrifice fly and Nuu Contrades added another run with a hard grounder to left field as Saint Louis trailed, 5-2 after two complete innings.

The Crusaders trimmed the deficit down to a run as Aiva Arquette drew a lead-off walk then moved to second on Xander Sielken's single to right. Tama Mataafa-Alferos doubled on a line drive that brought in Arquette and Sielken giving Saint Louis life.

Tsukada, who finished 2 for 3, drove in the final run of the game in the top of the sixth with a double to centerfield that scored CJ Oshiro.

Rustin Katsura came in the fourth inning and pitched two shut-out innings to pick up the win while Cade Terada-Herzer closed out the final two innings to get the save.

"He's been steady all year along with Rustin. I have to give props to the younger guys too. Rylan (Burigsay) did a good job keeping us in the game. Landon (Chun), I was proud of him for bouncing back for walking a few guys. Laa (Salvani) has been out, he's a soccer guy, to see him come back and do a decent job. It's a team effort all year, " Sue said, giving credit to the pitchers.

"Hats off to the pitchers," Tsukada added. "They have been keeping it under control. The defense has been playing lights out. Saint Louis is a good ball club. They can hit and pitch. It's good to see our team peaking at the end of the season going into the ILH tournament."

Villacourte pitched 1/3 of the first inning with 22 pitches was tagged with the loss. Arquette went 1 for 2, Sielken was 1 for 3, and Mataafa-Alferos was 1 for 3.