Tafua, a 2015 Kamehameha graduate and junior defensive end for the University of Utah football team, will lead the Utes against Arizona in their long-awaited season opener.

Saturday's game, which is scheduled for an 11 a.m. kickoff Hawaii time and will be televised live on ESPNU, will be Utah's first game since Dec. 31 of last year, when it lost to Texas, 38-10, in the Valero Alamo Bowl.

"We're for sure excited to go against someone else, another team, instead of going against ourselves, but at the same time it's kind of been like every season coming out of fall camp," said Tafua, a 6-foot-3, 250-pound Laie native. 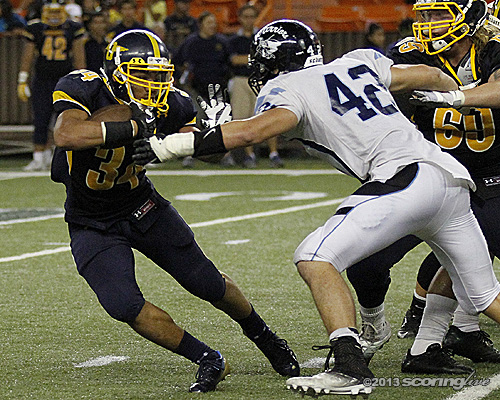 Tafua, a two-time All-Hawaii selection and the Interscholastic League of Honolulu co-Defensive Player of the Year in 2014, has earned the respect of his Utah teammates, who voted him as one of four team captains for the upcoming season. Tafua is also a member of the team's 14-member leadership council.

"There's two defensive captains and two offensive captains and I mean, it's just kind of an honor. It's what my teammates think of me, but I think I'm just trying to continue to earn their trust just by working hard — something people from Hawaii are used to." He went on, "You see it a lot, a lot of the boys back home are captains on their team, so I just want to continue that culture whoever I go."

That wasn't always supposed to be Salt Lake City. In fact, Tafua signed with another school in the Beehive State out of high school: BYU. But when Tafua returned from his two-year church mission, he faced a dilemma.

"It was a weird story," Tafua starts off. "I went on my mission and then when I came back in 2017, Utah was playing BYU at BYU and I went to the game because it was the week I got home from my mission."

"He recruited me when he was at UH and I would go to the UH games. I got to just talk story with him on the sidelines, but it was funny because I was on the BYU sideline," he chuckled.

Tafua said he reached out to Powell not long after the game — which the Utes won, 19-13 — and took a visit to the Utah campus a few days after that.

"I checked it out, saw a lot of boys from Hawaii — that's what kind of got me."

"Just seeing all of those guys, I was like, ‘Oh, this kind of feels like home.' There were lots of people from Hawaii so I really liked that. I flipped my commitment and kind of just ran with it, so I'm glad I made that decision," Tafua said.

Safe to say, so are the Utes.

Since his redshirt year in 2017, Tafua has seen his role on the Utah defense grow with each season. As a freshmen he played in 11 games, made six starts and finished with 23 total tackles, including 7 1/2 for loss and two sacks. Tafua earned honorable mention Pac-12 All-Academic honors that year, but it was his play that earned him all-conference recognition as a sophomore last season.

Tafua played in all 14 games in 2019 and started all but one of them. He totaled 47 tackles, including 8 1/2 for loss and three sacks. Tafua registered four fumble recoveries on the year, which tied him for the FBS lead, and received honorable mention All-Pac-12 distinction.

Utah posted an 11-3 record last season and made its second straight appearance in the Pac-12 title game. Along the way, Anae earned consensus All-American honors and broke the school record for sacks in a career (30). Anae, who was chosen in the fifth round (179th overall) of the NFL Draft in April, played as the opposite end to Tafua on the defensive line.

"It was nice to have essentially all four defensive linemen doing what they're supposed to do. We weren't perfect, but it's always nice when you're able to trust that I was doing my part on my side and (Anae) was doing his part on his side and we were able to see the results from it and ultimately have an okay season," Tafua said.

However, Tafua is the last player remaining from that D-line and one of just two returning starters on the Utah defense this year. His approach to what is expected to be an increased role in 2020 is to control what he can control.

"Pretty much just handling my twenty square feet, because once I take care of my job then my circle of influence increases … so thats' just what I've been focusing on is doing my part and doing it to the best of my ability," Tafua said. "It's definitely difficult having a lot of people that left, but it's something that we're gonna have to adjust to and we have a lot of guys that can fill in the spot, so I'm not worried about that."

And then there has been the matter of preparing for the season in the midst of a pandemic.

"I think the hardest part has been the uncertainty, because one day it could be one thing then another day it could be something completely different, like seeing a guy on the field one day and then the next day they're quarantining, so we have to deal with it, but we're not the only ones going through that, everyone's going through the same circumstances so we just have to play with the cards that we were dealt," Tafua said.

What is in the cards for the Utes this season is a conference-only seven-game schedule. They will play all five fellow members of the Pac-12 South Division and crossover for one game against a North Division member (Oregon State). Due to the modified schedule, the annual rivalry game between Utah and BYU — dubbed the ‘Holy War' — will not be played for the first time since the 2014 season.

"The goal is always to win games and ultimately to win the championship, but I think this year we're going to have to take it one game at a time and just really focus on Arizona for this week," Tafua said. "But just taking it one game at a time, focusing on the little things, watching film, making sure we're executing in practices and games like we're supposed to do, all eleven guys on both sides of the ball doing their part and I'm sure that the wins will follow, so that's our goal, win games."

For Tafua, his success on the field has been a result of  being able to strike a balance between football, school, family and time for himself.

"I'm sure that being a D1 student-athlete is similar no matter what college you go to. There's pretty much really only time for doing schoolwork. You're practicing for maybe one, two hours a day, but you also have to account for meetings, getting in the training room, watching film, taking care of your body, but most of my time is football and school," Tafua said.

"When I do have free time it's just checking out what's around Salt Lake and Utah, a lot of hikes, I have a lot of family out here, so that's been nice to go enjoy some family life when I want to get away from the city — they live a little outside of the city, it's nice — so I'm definitely blessed to have all those parts of my college life here."

Family has always been a big part of Tafua's life, whether back home in Hawaii or in Utah. It's the driving force being his work ethic and what drives him to push through the grind each and every day.

"They're the reason why I try to be better every day," he reiterated. "Aside from the obvious trying to make my family proud, I just like working on progress. I just like the process of coming in, watching film from the day before and seeing stuff you maybe could have done better, then having the opportunity to go be better again is something that is very rewarding, having that opportunity to get better at something every day."

But for Tafua, his exploits on the gridiron are just part of his story.

"Football doesn't define who I am, but it's definitely a big part of my life and what I'm doing now," he said. Tafua recited a quote that he often reminds himself.

"You are what you do, you become what you've done, but what you can and will become lies in what you do next."

Tafua is quiet by nature, a trait surely instilled in him by his late father, Lausii.

"I'm not really a very outspoken person, I'd say. I mean, I grew up and my dad would always tell me, ‘If you're good, people will talk about you, so you don't need to talk about yourself.' That's something that always stuck with me and I've carried with me to even now. I'm not that vocal leader, but I just try to handle my twenty square feet and hopefully I can do that and bring others with me," Tafua said.

In the spring semester of Mika's junior year at Kamehameha, Lausii Tafua passed away. He was 57.

"I would say that my dad wouldn't speak much too, but when he did speak it was something that I would remember, lots of things that kind of stuck with me, but not having him with me now is making those things stand out to me more now than ever, so that kind of motivates me as well, how he always taught me to put my family first and that's why I'm trying to do all of this, to make them proud and make him proud," he said.

Tafua is able to reflect upon the time he had with his father fondly. He's also appreciative of the opportunity he had to attend Kamehameha.

"It was for sure a blessing. I'm grateful for the time I was able to spend up on the hill. There were definitely a lot of coaches and mentors, as well as teachers that I was able to have that kind of helped my path along the way. I know it's a lot different, a lot of the coaches have changed, but I know that Kamehameha is a great place," Tafua expressed. "I'm just grateful for the opportunity I had to come out of Hawaii — it's a special place — I know I'm one of many and I know there are a lot of people who are doing it big and I just hope that trend continues."

Tafua said that high school sports provided a foundation for him to build upon, both on and off the football field.

"All the experiences in high school have definitely shaped who I am and the relationships that I gained in high school, they carry on to this day," said Tafua, whose uncle is former Warriors football coach David Stant.

Tafua, who is majoring in health society and policy with a minor in health, offered one last bit of encouragement to those youngsters with a dream.

Utah was picked to finish third in the South Division behind USC and Arizona State in a preseason poll of media members who cover the Pac-12.

Saturday's kickoff between the Utes and Wildcats is scheduled for 11 a.m. Hawaii time. The game will be televised live on ESPNU.