No. 5 Moanalua sweeps past No. 10 Kekaulike 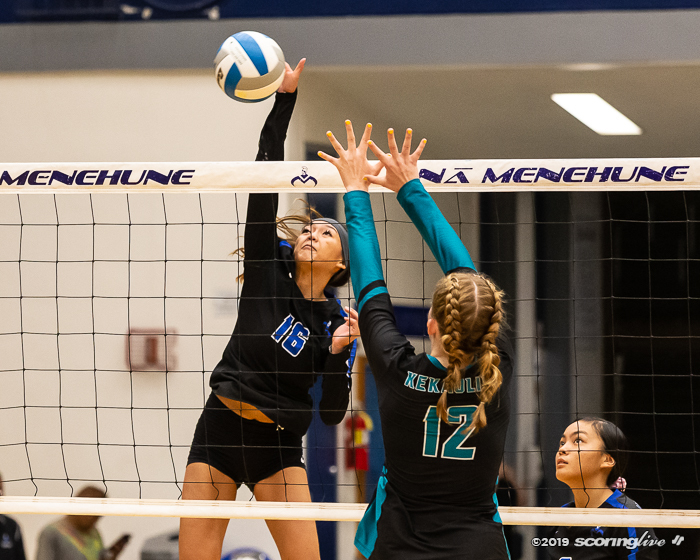 SALT LAKE — Tayli Ikenaga recorded match-highs of 13 kills and 12 digs to lead unseeded and fifth-ranked Moanalua to a sweep of fourth-seeded and 10th-ranked Kekaulike in the quarterfinals of the New City Nissan Division I Girls Volleyball State Championships Thursday night.

Na Menehune, the runner-up from the Oahu Interscholastic Association, improved to 15-1 on the season, and secured a spot in Friday's semifinal round, where they will play top-seeded Kamehameha at 5 p.m. at Moanalua.

Na Alii, the Maui Interscholastic League champion, fell to 13-2 with the loss and will play OIA third-place finisher Kapolei at 5 p.m. Friday in a consolation match at McKinley.

Ikenaga, a junior outside hitter, took 35 swings and had six attack errors for a .200 hitting percentage.

"She's definitely getting better and better," Moanalua coach Alan Cabanting said of Ikenaga, the reigning All-OIA Eastern Division Player of the Year. "You know, earlier on she was trying a little bit too hard and her hits were just a little off mark, but as she got into the groove of things, she was able to control her shots a little bit more and direct it where she wanted to."

Alexis DeBina-Bautista added 10 kills, eight digs and an ace and the setting tandem of Aaliyah Allagonez and Allexis Iramina posted 19 and 14 assists apiece for Na Menehune, who hit .235 for the match.

"This one our serving was pretty good; It didn't allow them to get their offense going," Cabanting said. "They had some pretty big hitters, but because they were out of system most of the time they became predictable and we were able to read a lot of their offense."

"We've been working on running out at practice and playing really hard just to figure out where we are right now as a team and we're doing really good. We just try to execute what we learn in practice and do it in the games."

Ikenaga said much of the Menes preparation leading up to the match focused on their own execution.

"We didn't really know anything about King K, but all coach Alan said is that they're an athletic team, so we just have to take care of our business and see how it goes from there," Ikenaga said.

Moanalua was coming off of back-to-back five-set wins in the OIA final against Mililani and Monday's state first-round match against Waianae.

Na Menehune had lost in the quarterfinals in each of the last two seasons. They were swept by top-seeded Kamehameha last year and dropped a five-set match against Kahuku in 2017.

Kekaulike, which captured its second straight MIL title this season, was coming off of a first-round bye Monday. It was seeking its first win to open state tournament play in three years.

Na Alii lost in four sets to eventual-champion Iolani a year ago and was swept by Mililani in the first round of the 2017 state tournament. The last time they won in the quarterfinals was 2016, when they topped Kalaheo in four sets en route to a fourth-place finish.