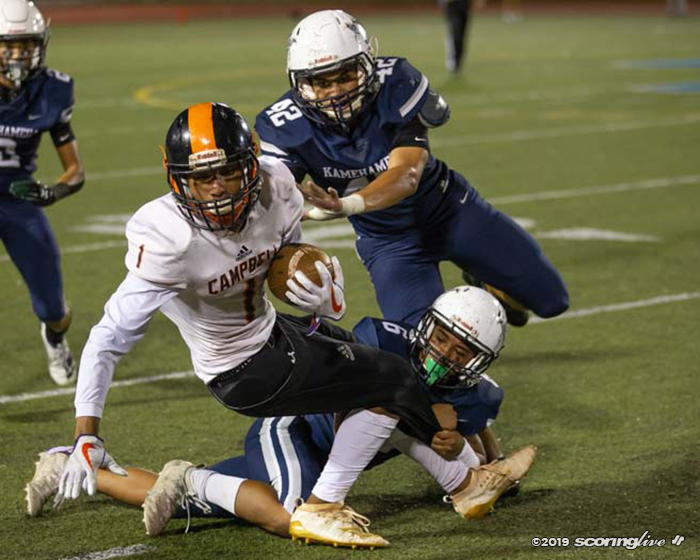 Campbell's Titus Mokiao-Atimalala looks to break free of Kamehameha defender after a pass reception. Mokiao-Atimalala led all players with 152 yards receiving in the Sabers' win over the Warrriors. Cody Ford | Special to SL

Led by a combined 204 receiving yards from Titus and Tamatoa Mokiao-Atimalala and a pair of defensive scores by Titan Jarra, Campbell closed out the regular season with a 35-28 win over Kamehameha.

The Sabers, winners of four out of their last five contests, got on the board in a hurry courtesy of a 62 yard strike from Blane Hipa to Titus Mokiao-Atimalala at the 10:49 mark of the opening quarter, but the Warriors equalized on a 30 yard interception return by Evan Rau at the 7:11 mark of the first.

Tamatoa Mokiao-Atimalala got into the scoring column on a one yard run at the 4:28 mark of the first to edge Campbell back ahead, but Kamehameha closed the gap to 14-9 on a safety in the opening moments of the second quarter.

Jarra recorded his first defensive score with 2:42 left until halftime, taking back an interception 13 yards to put the Sabers up 21-9, but once again, the Warriors responded with a score of their own, setting up Preston Rezentes for a 24 yard field goal as time in the second half expired.

In the second half, Hipa put Campbell ahead 28-12 on a nine yard keeper, but the Warriors clawed back with a Keaton Downing field goal late in third followed by a 8 yard fumble return by Dayne Maeva at 10:17 mark of the fourth to get within 28-22.

A 40 yard fumble return for a score by Jarra, his second of the game, moved the Sabers ahead 35-22 with 36 seconds left to all but seal it, but the Warriors quickly moved the ball down the field on their final possession of the game, 52 yards of it coming off a pass from Jonah Yuen to Blaze Kamoku.

That long connection ultimately helped set up the game's final scoring play, a three yard pass from Yuen to Kalanikuikahi Lorenzo to make the final count, 35-28.

Hipa completed 13 of 22 passes for 224 yards, and running back Jonan Aina-Chaves added 84 yards on the ground on 17 carries for Campbell. Jarra added 5 1/2 tackles and a sack to go along with his two defensive scores and Tyrese Tafai had four tackles, an interception and a fumble recovery.

The Warriors were paced offensively by Kamoku's 96 receiving yards on 6 catches. Maeva and Tuiteavaika Ickes notched a game-high six tackles each and Ezra Evaimalo recorded 4 1/2 tackles, a sack and two fumble recoveries in the loss.