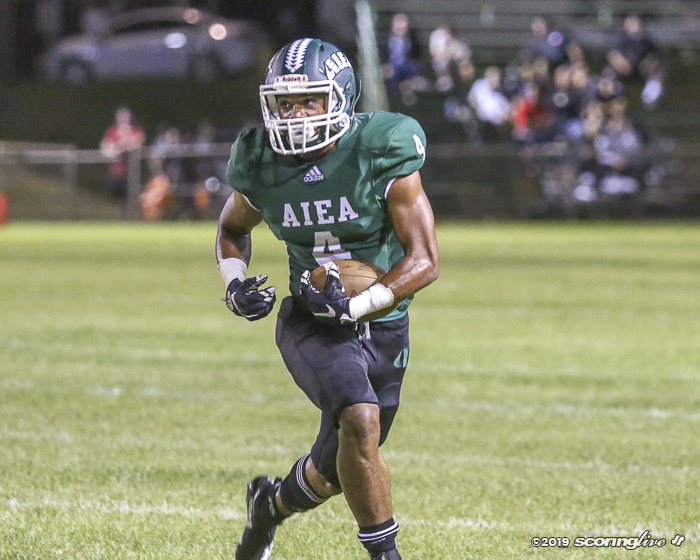 After carrying the ball just two times for six yards before halftime, junior running back Javon Miller turned it on after the break and finished with 130 yards and two second-half touchdowns on 16 carries to help Na Alii rally past Radford, 34-19, for their first win of the season last weekend.

It was a rare sight for the pass-oriented Aiea offense, who saw its first 100-yard rusher since Isaiah Ripley ran for 128 in a 47-43 win over Kaiser on Aug. 14, 2015. Na Alii also didn't have a single player reach over 100 yards rushing for the year the past two seasons.

Miller, a 6-foot, 190-pound transfer from Mililani, accounted for all of the yards from scrimmage on Aiea's first scoring drive after halftime. With great field position thanks to a 53-yard kickoff return by Dylan Soberano, Miller got things going with an 8-yard run. After an incomplete pass, Miller then took a toss around right end for 23 yards before scoring on a 2-yard run to make it a 19-13 game.

"One of our goals in the second half was to establish a running game," said Amosa. "Although we were behind, we wanted to still establish that so we could control the game."

With quarterback Kayson Castillo completing just two of his 13 pass attempts in the second half, Miller helped stabilize things offensively for Na Alii.

Miller didn't give Aiea the go-ahead score — Mana Young-Tavai's 44-yard pick-six put Na Alii ahead, 20-19, to start the fourth quarter — but he scored a much-needed TD to put his team firmly in control late in the game. After getting stopped for a loss, Miller took a handoff up the middle before bouncing it outside for a 61-yard TD down the left sideline to give Aiea a 27-19 advantage with 2:10 remaining.

"Javon reads so well. On that play we ran, that was our base dive, inside zone run play," said Amosa. "He was patient enough to get it to him and find the opening. I'm really happy for him. He works hard all offseason."

It was a far cry from his performance from a week ago against the Cougars, when Miller finished with just three yards on seven carries.

Amosa said that he hopes the newfound ground game will be more common in the near future.

"To me, it's a key to our offense. The idea is a simple running game, but it has to be effective, four or five yards. It cannot be a loss of two or a loss of three. The running game to me, as an OC, is super important."

"Because we throw the ball a lot, I would love to be physical with these guys. I think we got the boys that can do it."

Na Alii will try to earn their second win of the season when Iolani visits Friday night.