No. 5 Kahuku holds off No. 6 Kamehameha 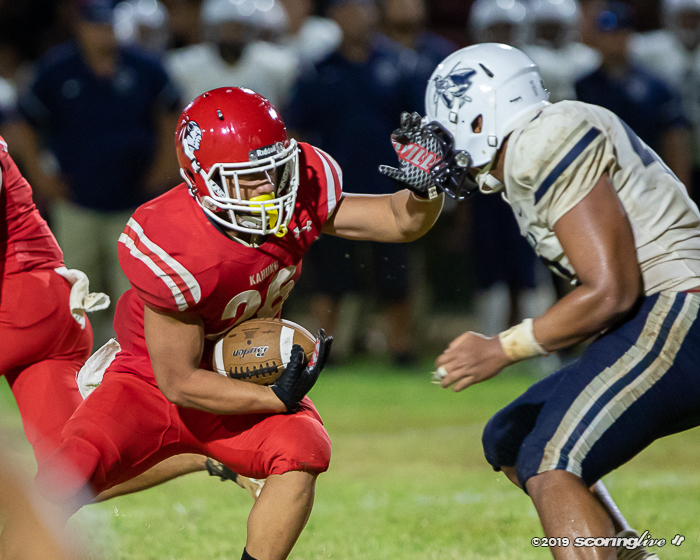 Kahuku's Zealand Matagi tries to put a stiff arm on a Kamehameha defender in the fourth quarter. Michael Lasquero | SL

KAHUKU — A season opener isn't fun without some drama.

After building a 21-0 lead after three quarters, No. 5 Kahuku survived a late rally by No. 6 Kamehameha for a 21-13 season-opening win at Carleton E. Weimer Field Saturday night.

The Red Raiders totaled five interceptions against the Warriors, which included a 56-yard pick-six by Frisco Aveau in the third quarter to give Kahuku (1-0) a 14-0 lead. Kahuku's other two touchdown drives were also jumpstarted by interceptions, both of which were brought down by Masi Pasi.

Zealand Matagi scored on a 2-yard run just before the end of the first half and Alex "Mana" Fonoimoana-Vaomu ran in a 7-yard TD for Kahuku's final points of the game. Fonoimoana-Vaomu also came down with the game-sealing interception on Kamehameha's final play from scrimmage, a fourth-down deep throw over the middle.

"This is all because of our hard work in practice," said Fonoimoana-Vaomu, who started the game taking snaps behind center. "We come out everyday in practice, give our full percent and just ball out."

After the Red Raiders went up 21-0, they started to rotate their defensive reserves, which opened the backdoor for Kamehameha (1-0).

Kawika Clemente sparked the Warriors' comeback bid with 14 carries for 141 yards and two TDs, which included an 80-yard scamper off a draw play with 3:09 left in regulation.

"We didn't like how we finished, but pretty much everybody got into the game. That's what we wanted to do," said Kahuku second-year coach Sterling Carvalho. "It's a long season, and every team is physical so we just got to be sure we manage our reps and make sure that everyone is healthy."

Regardless, it was the Red Raiders' game to win. In addition to the five interceptions, Kahuku racked up eight sacks and pressured Kamehameha quarterback Kiai Keone all night long.

"The defense is experienced," said Carvalho. "A lot of our defense is either a three- or four-year starter. They're very experienced for us and they fly to the ball. Hats off to them."

Kahuku also went back to a traditional run-first offense and had 47 run plays to just 11 pass attempts. Matagi rushed 19 times for 82 yards, Fonoimoana-Vaomu had eight carries for 52 yards and Lilio Kaluna added 48 yards on nine carries to lead the rushing attack.

"The O-line, they wanted the game, so we put the game on their back," Carvalho said of the offensive game plan.

But the game wasn't without its controversy however. Late in the second quarter Matagi fumbled a ball at the line of scrimmage, but was credited by the officials with a TD with 30 seconds left in the first half.

A 23-yard completion to Skyler Ramos that would have given Kamehameha a fresh set of downs at the Kahuku 9-yard line with under two minutes to play was wiped away by an offensive pass interference call. Still, two personal fouls against the Red Raiders aided the start of the Warriors' final drive that began with 2:57 to play after Kamehameha recovered a Kahuku fumble near midfield.