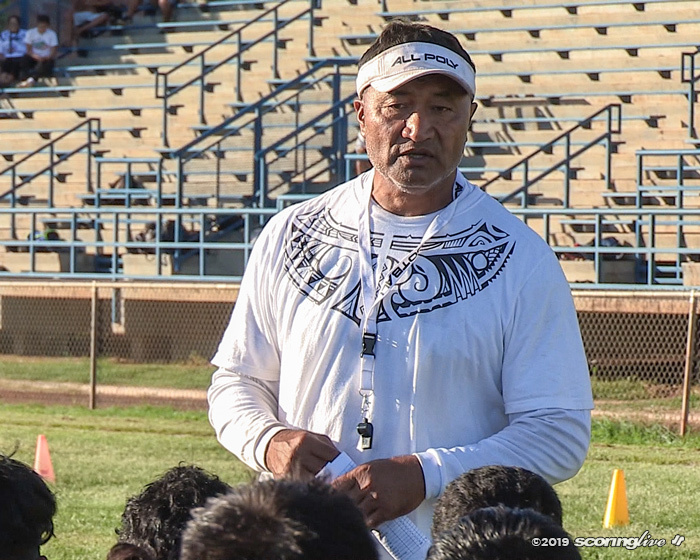 WAIANAE — Football season is less than two weeks away from kicking off and there's no slowing the hustle and bustle of practices in Waianae under first-year coach Mike Fanoga.

"We're only practicing for an hour and 45 minutes," Fanoga said.

With 32 years of college-level coaching experience, the American Samoa-native enters his first venture as a head coach with aspirations of treating the Seariders like a Division I college program. Every five minutes, assistant coach Derek McMoore's voice blares through the megaphone strapped to his back to announce a new period of practice for individual position groups or team drills.

"The kids love it," Fanoga said. "The parents love it too because instead of three or four hours of practice, I want the players to go home before it gets dark. I want them to go home and enjoy family life, sit down with their family and have dinner together."

We're now under two weeks away from the start of the 2019 football season, and Waianae first-year coach Mike Fanoga is looking to change the pace for the Seariders https://t.co/zEjq88h3ff pic.twitter.com/NGGJWj1vYS

Fanoga has been around many different coaches and programs, starting a year after his playing career as a linebacker ended at the University of Texas at El Paso in 1985 (with two years prior of junior college ball at Snow Community College). From there, he made stops at Livingston, Iowa Wesleyan, Valdosta State, Kentucky, Western Kentucky, New Mexico State, Wyoming, Lane College, Benedict College, Virginia Union, Morgan State and Missouri Southern.

"I've been around a lot of good coaches and I've learned it from them, and I want to give it back to [the players] so that's what I'm doing right now in Waianae," Fanoga said.

One of those coaches was Hal Mumme, who is credited as one of the founders of the "air raid" offense. Mumme was the offensive coordinator during Fanoga's time as a player for the Miners and later brought him on staff as a defensive coach at four different schools for a total of 12 years together.

"The only thing I know is my experience and I've been in a lot of good places and I know how to watch other coaches on how to run a good program."

If announced as true by @SeariderSports, new Waianae football coach Mike Fanoga brings 30+ years of collegiate experience in his first HS stint. Born in American Samoa, he was a LB at Snow CC and UTEP before beginning his coaching career with the Miners (via @TheCoachesTree) pic.twitter.com/rHeZH4Y4tr

It's been 12 years since Waianae last made an Oahu Interscholastic Association championship appearance — a 12-3 losing effort in the Division I title game to Leilehua and then-quarterback Andrew Manley (now offensive coordinator for the Mules).

2018 saw the Seariders end the season with a 1-8 overall record, their lowest number of wins since 1959. Granted, it was perhaps their toughest schedule yet in the newly minted OIA-ILH Interleague Open Division.

"When I went through the process recruiting when I was at the college level, I've always felt love with Waianae because it's beautiful. The mountains are great, especially the ocean. The people are great," Fanoga said. "I know it's challenging, but I love challenging. That makes you a better person and also a better coach."

Out on the west side with the Seariders this beautiful Tuesday afternoon. Had a nice chat with first-year Waianae coach Mike Fanoga. #ImuaTeamWaianae @scoringlive #SLPFP2019 pic.twitter.com/rLdppBWNLQ

While it's Fanoga's first coaching gig in Hawaii, he's no stranger to the islands after visiting on numerous recruiting trips, being involved with All Poly Sports camps and having family here with his Oahu-raised wife, Soana, and daughter, Sydney (Punahou '14).

"The kids deserve better. Not just here in Waianae but on the islands," Fanoga said. "There are some schools trying to catch up, like ourselves. But other schools are there and right now we're trying to catch up with them.

"I'm just going to make with what we have," he continued. "Yes, we need to work on facilities, but other than that, I'm not crying or complaining. I'm excited to be a head coach and I'm just going to do whatever I can to help these young people get better."

Fanoga was announced as head coach earlier this year in February, taking over for Walter Young who finished with a 26-22 record in four seasons. Young was the 2015 All-Hawaii Coach of the Year and helped the Seariders make state tournament semifinals appearances in each of his first three seasons.

Also check back later for more details on how you can obtain a physical print copy of our annual 2019 Prep Football Preview with team breakdowns, predictions and preseason Player of the Year picks.