Perkins made instant impact for Trojans in '19 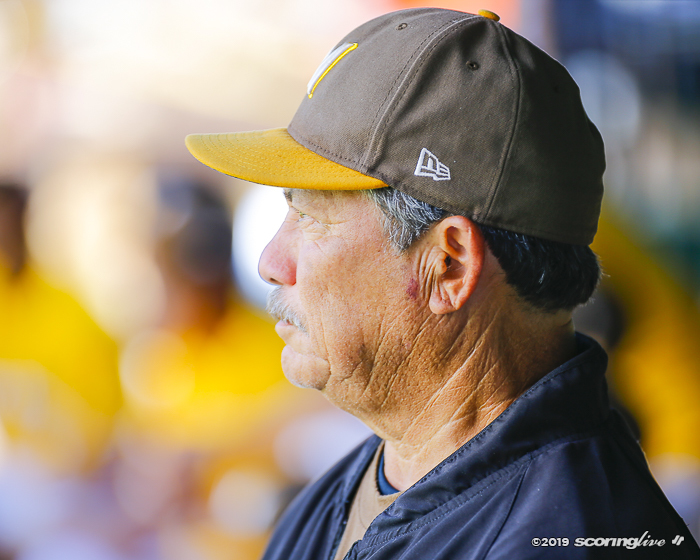 It did not take long for baseball to find its way back into the life of former Kamehameha baseball coach Tommy Perkins. CJ Caraang | SL

After more than 20 seasons that spanned three decades at his alma mater, Kamehameha, Perkins was abruptly relieved of coaching duties just weeks before the start of the Warriors' 2018 campaign. The longtime intermediate coach at the Kapalama campus, went 32-21 in his three seasons leading the varsity squad, but for the first time in a long time, Perkins was relegated to being a spectator.

It wasn't until last fall that Perkins got back into coaching, when he received a call from an old friend in Mililani coach Mark Hirayama.

"He talked to me about coming (to Mililani) after I left Kamehameha," Perkins said.

Hirayama and Perkins got to know each other during their time at Kamehameha. While the pair were never on the same coaching staff — Perkins was at the intermediate level then, while Hirayama was a varsity assistant to former coach Vern Ramie — their friendship grew over the years.

"We probably go back maybe 15 years, when I started coaching at Kamehameha," Hirayama recalled. "I was always with the varsity, but the program was pretty close so I knew all the coaches."

Perkins said he got to know Hirayama quite well over the latter's five seasons at Kapalama.

"We knew each other and we talked a lot so I enjoyed it," Perkins said. "When he called me when I got let go, I wasn't really looking, so it was a good call and something that made me think about it. He was a very good salesman. He said, ‘You still have a lot to offer.' "

Ultimately, Perkins took Hirayama up on the offer and joined the Trojans' JV staff as an assistant last fall.

"It was something for me to stay in the game so it was good," Perkins said. "It was nice working with the JV, working with the kids again and JV baseball is a fall-season sport for the OIA, so then I just rolled right into the varsity."

Hirayama said he was willing to take whatever Perkins was offering.

"It was just a matter of what he wanted to do. He's such a great guy," Hirayama said. "He's great with the kids, he's got the baseball knowledge, but just his life experiences brought so much to the program. I just try to surround myself with the best people to help the kids coming through the program and he's definitely a class act."

Perkins did a little bit of everything for the Trojans this season — most of it coming behind the scenes.